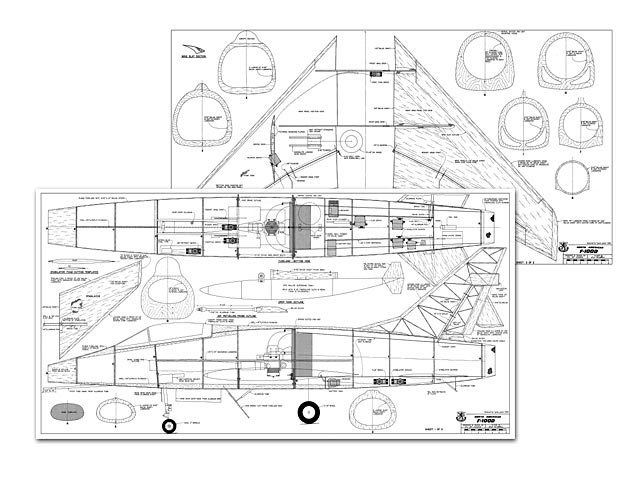 Quote: "Col. Art Johnson has designed and built this scale ducted fan model of the F-100D. He has finished it up in the colours of the full scale one he flew in the Air Force.

The F-100, the Super Sabre, as North American called it, or the 'Hundred' or 'Hun' as the pilots called it, has a very special place in the history of fighter aircraft development. The first of the Air Force's Century Series fighters, the F-100 was also the World's first operational fighter that could exceed the speed of sound in level flight. Designed as a pure interceptor, the 'hundred' ended up doing everything except the all-weather job in the USAF's Tactical Air Forces through the late fifties on through the sixties and it is still in service today.

Believe it or not, there are radio controlled F-100s flying routinely out of Tyndall AFB in Florida. These are the one-to-one scale variety and they send them out over the Gulf of Mexico for the missile guys to try their luck. Maybe it is a good thing that we have a weight limit for AMA competition. Just think of one of these R/10 F-1005 arriving at the Nats and the pilot announcing that he has a rather large entry for the R/C Giant Scale event.

l gave a lot of thought to the potential problems with the F-100 as a model before actually digging into this one which was my first attempt to design a ducted fan model of a jet fighter. On the plus side the F-100 has straight through ducting, the landing gear retracts inward in the manner that modelers can easily handle, the lines are clean and there was a very large hole in the back when afterburner eyelids were open for take-off.

I wanted to build the model to exact scale rather than enlarge the wing, the exhaust nozzle, and make the gear operate in a non-scale manner, features that are common to many of the jet models now flying. With the F-100, I thought I could stick very close to scale.

On the other hand, the Hundred has a full flying stabilator, a very thin highly swept wing without a let of wing area and a long fuselage that would be hard to keep light as compared to the wing. I also recalled the F-100 as not being one of the most forgiving fighters that I had flown. Remember the Sabre Dance? The 'Hundred' was not kind to pilots with poor flying technique. She was a reliable bird but in the handle-with-care class. I have found that models tend to retain many of the flying characteristics of their prototypes and I did not expect a model of the F-100 to be any exception.

I was encouraged in this project after seeing a video tape at Larry Wolfe's Jet Hangar Hobbies booth at Toledo a couple of years ago.The tape showed an F-100 out at the West Coast flying rather well with a Turbax fan unit. In fact, I almost built this version but after weighing the hardware that I wanted to put into an all-out scale F-100, I decided that I had better go for a larger model with more wing area. Besides, I find it a lot easier to fly a larger model simply because I can see it better and believe me, your eyes do not get better with age. That has to he one of the major attractions of Giant Scale.

A larger model meant that I needed a larger fan unit and there was only one available, the Byron unit. I will be the first to admit that a tractor fan has to be more efficient, and that it is harder to cool the engine with a pusher, but on the other hand, a large diameter fan with a lot of horsepower pushing it, is going to put out a healthy amount of thrust. I have flown all of the Byron ducted fan models tall belonging to other modelers) including models of the F-16 that weighed over 14 pounds. The Rossi .81 will get any of these models moving fast enough for anyone satisfied with anything less thna a scale speed of Mach 3..." 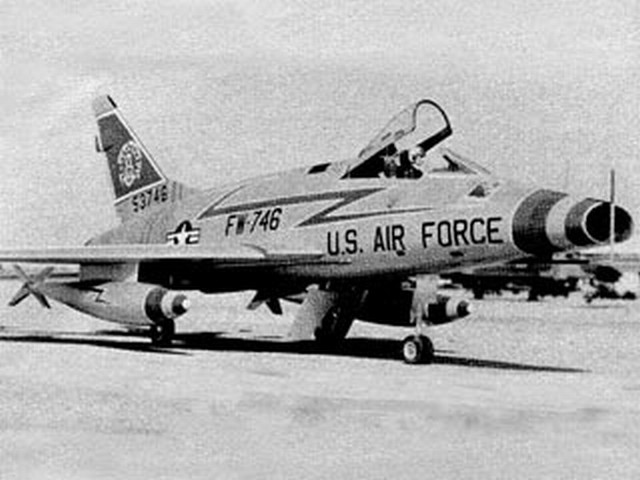