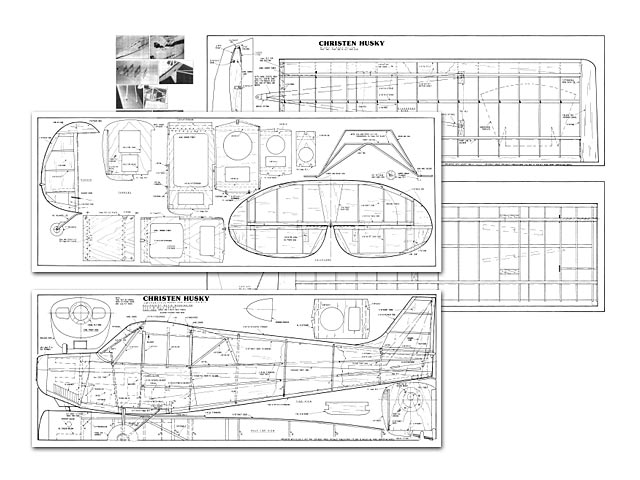 Christen Husky (Aviat Husky). Scale model for radio control. A 53 in wingspan scale model for 3 function R/C. Designed by David Boddington. Use a .20 to .30 cu in engine. Published in 2 parts in July and August, 1988.

Quote: "The model you asked for! Your pull-out plan, over two months, features: 1/8th scale; 53 inch span R/C version of the new 'Husky' utility aeroplane for .15 to .20 engines and 3-4 function radio. Christensen Husky, by David Boddington.

IF YOU WERE GIVEN THE TASK of designing and producing a replacement aircraft for the highly popular and effective Piper Cub and Super Cub, where would you start? Frank Christensen and Herb Andersen, Frank's consulting engineer, had that problem when it was decided to diversify the Christen production of 'Pitts Special' and 'Eagle' aerobatic biplanes. With the market for sporty biplanes likely to become saturated, Frank opted to look into the marketing of a utility aircraft that would also have an appeal to the individual sports enthusiast - and this at a time when the sales of light aircraft were at an all time low in the States!

Their first thoughts were to buy the rights of an approved design, such as the Super Cub, or one of the Cub derivatives, but this proved to be a costly exercise and would have left them liable for all the previous aircraft of that type that had been produced and product liability is a crippling disease for the aircraft industry in the USA. So, with the in-house experience of light aircraft design, they decided to design their own aeroplane and include all the features they considered desirable.

In the same way that the Eagle is similar in appearance to the Pitts Special, so the Husky has more than a passing resemblance to the Super Cub. In fact, although they have an undoubted similarity only a few parts of the Super Cub are interchangeable with the Husky. The aim was primarily to produce an improved aeroplane which is also easier to maintain.

Some of the external differences are obvious, the Hoerner style wing tips (in place of the more curvaceous outlines of the Cub), the modified tailsurfaces and - too many eyes at least - the overall more attractive lines of the Husky. Less apparent are some of the structural changes, the fitting of a 185 bhp Lycoming engine and the slight, but important, modifications to the Clark Y/USA 35B wing aerofoil.

Rugged, dependable, a no nonsense aeroplane these were all adjectives descriptive of the Cub series, they apply even more so to the Husky, a name that sums up the virtues of the utility design.

Before making the incision. The pull-out plans for the Husky are presented over two months, with the second part to be included in the August issue. All the fuselage parts, plus the tail surfaces, are included in the drawing presented here - but the pull-out next month includes a series of constructional photographs showing the building sequence of the fuselage. So, you have the choice, you can either satisfy yourself with just cutting out the parts, or you can push ahead in the hopes that you have interpreted the drawings and instructions correctly.

Designed for three function control, no working ailerons are installed. If you wish to fit ailerons you could have a micro servo in each wing, or have a centrally mounted servo, in the fuselage, with removable linkage connections. Space for the radio equipment in the fuselage is not over generous and access via undercarriage plate/hatch is reasonably limited. It is possible to install standard size servos and a 500 mAh battery, but work out the positions of the equipment before you commence construction.

Space for the fuel tank is also tight, ideally, a special tin plate tank would be made to fit between formers F1 and F2, with no projection into the cabin area. With a commercial clunk tank ie SLEC 4 oz square tank, the tank must be installed before the fuselage windscreens are attached, otherwise it will be near impossible to fit when covering is complete.

Position the engine mount according to the engine you are using; the larger engines, including four-strokes will have their heads projecting through the cowling. It should be just possible to hide away a '20' size engine under the cowling. Conventional silencers will obviously not fit under the cowl, you will have to either fit a 'dumpy' or remote mounted silencer - or use a diesel engine with an integral silencer!

Closed loop rudder linkage and pushrod operated central elevator horn are suggested for the control surfaces you could use external rudder and elevator horns and conventional pushrods if you preferred.

Cut out, or form, all parts before you commence construction, it makes for quicker and more enjoyable building - and the second article may be out by the time you have completed the preparation!

Fuselage. A couple of points to note. You cannot build one side over the top of the other because the cabin glazing supports project above the 3/32 in sides, as does the 1/8 in top sides. So, remember to build one left hand and one right hand side. Moulded cowls are available, although it would be possible to fabricate a cowling form 3/4 in nose piece and milli-ply sides..." 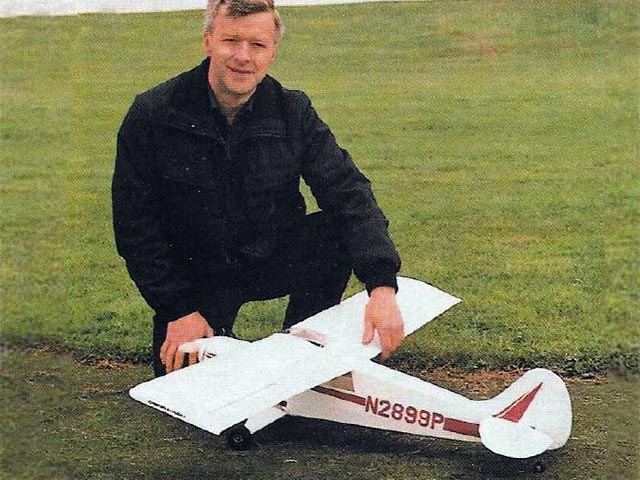