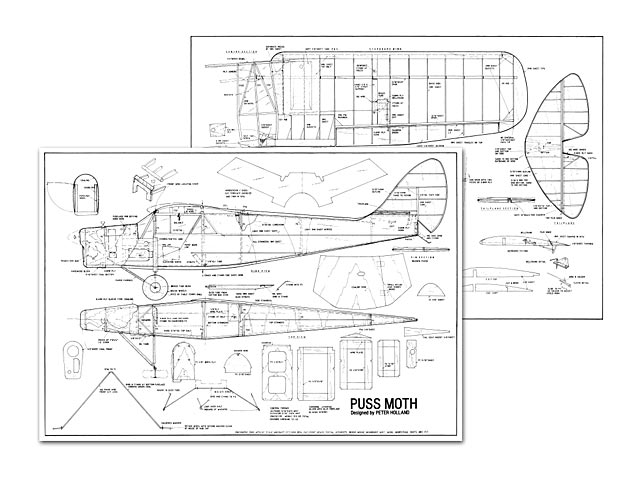 Quote: "The Teaxaco Puss Moth Challenge. The Texaco contest for .049 Cox engines in an interesting challenge, writes Peter Holland. How can one achieve a long duration flight with only two flying surface controls and a tiny amount of fuel in the tank of a throttle-less Texaco Cox Babe Bee .049, yet have a model of good scale format?

The rules require a limited wing area, so the model must have a light loading and reasonably low frontal area. The rest is up to the pilot, who must make the best of his skills to reduce control surface induced drag, flying at an efficient climb angle and seeking out any lift that may be about.

This contest should get the best out of builder and pilot. Clearly, a prototype that has some inherent stability will influence the choice from the pilot's point of view, yet scale detailing will have to be practical if it is not to increase the wing loading or drag. The model should not be fragile however, because being small it may have to contend with the after effects of ground turbulence when it 'dead sticks' onto terra firma.

The choice. The DH80 A Puss Moth has always been a favourite subject of mine, even way back in free flight days with rubber power. Then it needed a bit more dihedral, but with a geared up small prop, an early version was a most consistent performer. When it was suggested to me that I had a crack at the Texaco Scale Challenge class, the Puss Moth seemed a good starting point. After all, the duration contest requires a clean slim fuselage and light wing loading. Radio control takes care of lack of dihedral, and the low centre of gravity helps the model to hold an efficient trim.

The only minus point is the drag produced by the struts, but then so many aircraft of the period covered by the rules have this to contend with, and fellow competitors will have to 'strut their stuff' as well.

The aim is to keep speed low to reduce drag, yet have an efficient climbing machine to make the most of that short fuel metered engine run, positioned well up wind with the aid of radio, so that a minimum of drag is produced by control surface movement, then some lazy lift finding tracking across the site as though it were slope soaring. The wind strength will decide just how much angle to make in this series of 'tacks', to arrive at the landing pattern. Aileron control in place of rudder should reduce the drift, as the heading is changed, and of course is especially useful on finals with this small machine.

You will find that I have made much use of 1mm sheet. This is a boon: 1/16 in sheet has to be rather softer than I have chosen, and a simple sheet box fuselage is so useful in aligning things and maintaining rigidity. The one piece wing is a rib-for-rib affair with scale sheet areas. The tops of the ailerons have riblets for show and sheet under where it doesn't show. Tail surfaces are also on a 1 mm core with half ribs and edge cap for scale fabric line.

Those wing struts are screwed to the wing and held with a rubber band through the fuselage to be part functional. You can omit the jury struts if no one is looking.

Are you convinced? Want to give it a try? Grab yourself some light but not overly soft 1mm sheet as first priority.

Wings. Make a ply template, and cut 26 basic ribs without spar notches. Lay a set of nine on the plan at the aileron position and trim their trail-ing edges back to fit.

Pin them together in a graduated block, with the leading edges flush, then sand the tops down to blend into the correct depth at the aileron spar. Copy the other batch to match. Now add the inboard ribs and saw out the main spar notch and recess for the inboard and narrow LE sheet.

Assemble each wing half with the spar protruding to the centre line and the aileron spars in place: note the slight sweepback. Pack up the leading edge and pin it to the ribs whilst gluing. Cut the inboard ribs where the continuous 1 mm web goes, cyano helps at this detail..." 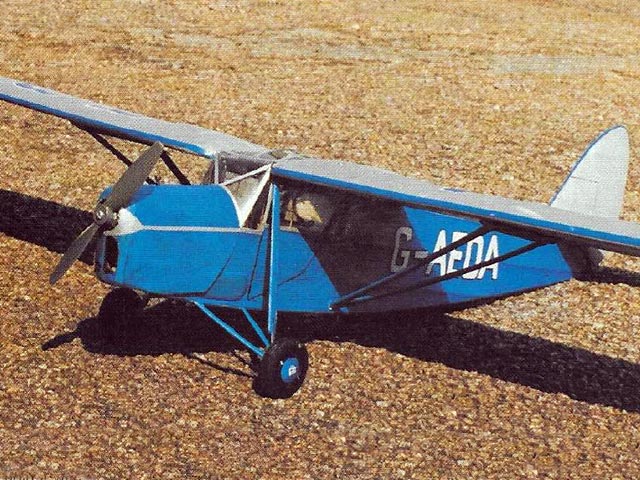