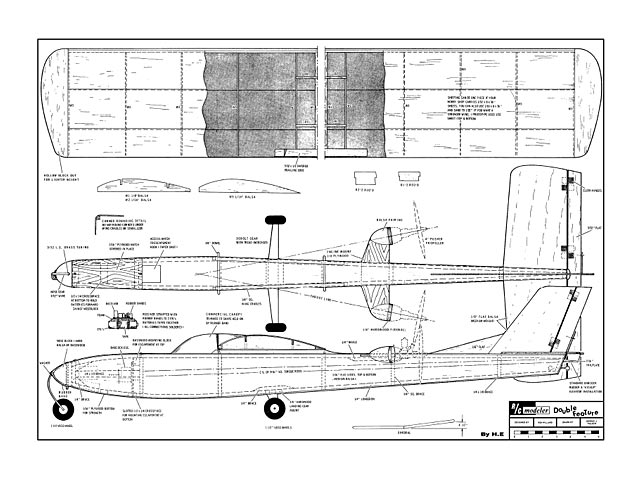 Double Feature. RC sport twin pusher model. The plan shows a twin pusher layout, but the article also includes some discussion (and a sketch) of various other layouts.

In the constant search for something new and exciting in RC several twin-engine designs have appeared. There's a real thrill to the sound of two engines as the model zoorns through the sky, but when one of the engines quits, unless the pilot is really on the ball, the results are usually disastrous. This is particularly true if the model is a single channel job with no motor control.

There are several ways to solve this problem, all of which will be discussed in a forthcoming article. For example the simplest way is to design models with tandem engines on the center line. This isn't quite as challenging or exciting though, as the more common placement of engines on either side.

Then, too, you can always take the chance that your system - whether it involves a common fuel supply, or topping off both tanks just before launch - will make both engines quit at the same time This will be true most of the time; but there always be that one odeasion when you goof on the needle valves, or a piece of dirt gets in one fuel line, and your luck subsequently runs out.

So, the thing to do is to make sure that if one engine quits for any reason, the airplane is still fully controllable. The easiest way to do this is to have the thrust of each engine directly through the center of gravity, or at least, nearly so.

This is pretty hard to do with the engines mounted on the wing - although you can come fairly close by using small diameter props, mounting the engines close to the fuselage, and toeing the engines outward. This toe-out angle is large, however, and the overall appearance of the model suffers aecordingly.

And that is why the Double Feature was designed. I took a leaf out of the Lockheed Jetstar design, mounted the engines aft of the wing, then cocked them in so the thrust line of each engine goes very nearly through the center of gravity..." 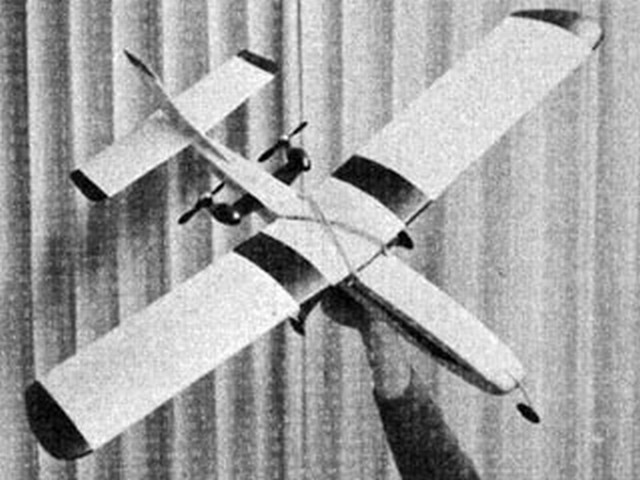