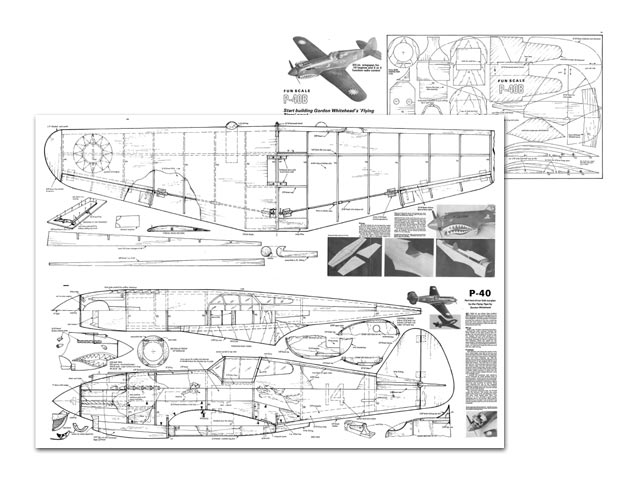 Quote: "There's no doubt about it. The early versions of the Curtiss P40 fighters have really great potential for the fun scale modeler. The sleek shape, generous nose moment and tail area and, above all, the excuse to paint a set of shark's teeth on the radiator cowl are all features which cry out for us modelers to make replicas by the score.

So here RCM now presents a mini P40 which you can afford to make by the score! This one is a real star. I must confess that in the past I have voiced (in print no less) that the .10 size engine wasn't much use for sport scale. Well folks, I was wrong, at least in the case of the 0.S. .10 FSR. In this engine, which sports a compact and efficient muffler, we have a miniature powerhouse which we can employ in those half-pint sized WW II fighters we used to dream about owning when we were kids.

I keep passing the transmitter to fellow club members to get their conservative opinions on how the model performs. After a minute or so, they all exclaim with the same puzzled disbelief: 'This is flippin fantastic!' And here's why: 4-point rolls at zilch altitude; reverse Cuban 8 with 4-points in the upward rolls; beautifully lazy half reverse Cubans; slow rolls lasting up to 10 secs; surprisingly large loops - even loops with a complete roll in the top half; and last but not least, attention getting high speed fly-bys with the sun glinting evilly on those cruel teeth as she sweeps by.

Despite her miniscule size, this ship will undoubtedly attract attention. She is so stable and precise that it is no wonder that folk disbelieve what their eyes and thumbs are showing them. I don't have throttle control fitted (a pity) so have to fly her until the engine stops. Then I discover that she loves aether so much that she wants to stay up there. swear that her big nose is a thermal sniffer, for on several occasions she's been up there for four to five minutes after engine cut.

She is not particularly fast, and certainly the climb is not in the pylon racer class by a long shot. Nevertheless, if you fly her roller coaster fashion and employ the exit momentum from one maneuver to help you into the next you can revel in her agility and smoothness.

Talking about a tiddler like this in such glowing terms is a bit embarrassing. But what the heck, it's all true! In fact, it's so true that I've made another .10 powered WW II fighter, only this time with two engines, and this one is really something else. Just wait for it to be published in RCM. (Editor's Note: Coming up very soon.) As for the construction side, there isn't much to be said. You build it, and you throw it. Just like that.

Okay, here are a few hints. The secret of the ship's success is that highly unscientific flat bottomed airfoil section. The essence of this section is that you can accurately jig in the necessary washout with the assembly pinned to the board. So, first make and cut out the upper and lower wing skins and sand the outer surfaces. Then CA all wing internal structure in place on the lower panels, not forgetting the aileron torque rods, and mark the aileron gaps with pin-holes through the sheet. Join these panels at the correct dihedral. Then pin one lower panel to the building beard with the shims as shown on the plan, and glue the appropriate top skin in place.

Allow this assembly to dry, and repeat the operation for the second panel. Reinforce the dihedral joint with a 3/4 in wide strip of gauze and CA or epoxy. Separate and hinge the ailerons, and assemble the underfairing..."

Hi Steve, Great plan, everything fits and looks really scale. Thanks for making available and can't wait to fly [see more pics 003].
John - 16/02/2015
I was one of the guys that Gordon used to let fly his models and the Tomahawk was always a fun machine with the beauty of simplicity yet a real 'warbird'! That was back in '84 in Cumbria, England and 35 years later I've Just bought a pair of OS .10s with the aim of building a Tomahawk... and also a P-38... one other of Gordon's models I had the pleasure of flying!
Richard Spreadbury - 09/08/2019
Add a comment