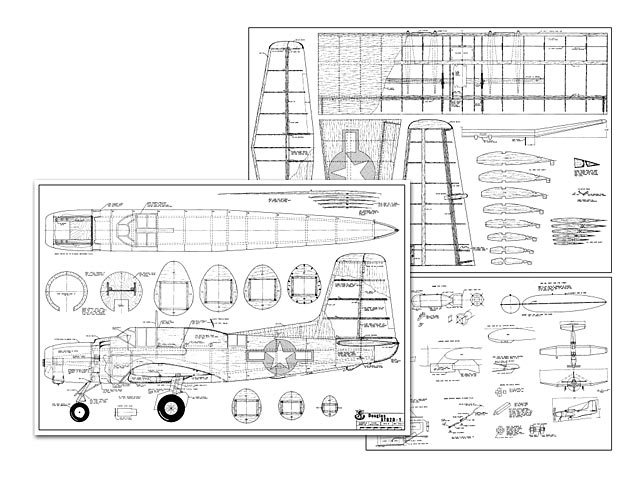 Quote: "Claude McCullough's fabulous 84in span Skypirate is one of the finest scale R/C designs ever to be presented. Among its trophies, a First In Scale at the 1965 Nationals.

A lesson to be learned early when searching for good scale subjects is that the airplane which looks ideal in a picture or three view more often than not has defects hampering conversion into a practical model. When plans are drawn up for building you find cowlings expanded to sizes that blanket the flying prop, fuselages that turn out big enough to double as a dog house, or are so divided by wing position and cabin location it would take a shoe horn to get the equipment squeezed in and still leave room for cockpit detail. Spinners and wheels end up as odd sizes obtainable nowhere.

Then there's that old scale bogie tail area. Maybe with our present highly developed proportional it really is possible to fly anything in model form that flew full size, using scale tail area, no matter how small. Still, and here my old free-flight phobias crop out, it seems that a fair sized fin and stab are definite aids in having a flyable reproduction, particularly in critical low speed situations. Add landing gear positioning problems, too short or too long nose moments, etc and you get the picture. There is no such thing as a perfect scale prototype and very few even close.

So you can understand my enthusiasm when I came across a 3-view of the Douglas XTB2D-1 alias the Devastator II and Skypirate, the answer to an R/C scale modeler's prayer. Despite years of digging in old magazines and books I had never heard of this airplane until information was printed in the January 1961 (International edition) of the English magazine Flying Review. Subsequent research seems to confirm that this was the first time data had ever appeared in public print. For example it is not even mentioned in Jane's All the World's Aircraft of the period, an almost unheard of omission. My conclusion is that this 'lost' airplane must be the rarest completed experimental by a major manufacturer in the World War II period.

It was an exceptionally large 70 foot span, 3 seat ship board torpedo bomber, powered by a 3,000 hp Pratt and Whitney XR-4360-8 engine. Intended for the big Midway class carriers, only two prototypes were built and flown during 1943-45 and the end of the war brought cancellation of the project.

Prior to discovering the XTB2D-1, I had sifted through the plans, photos and specs of hundreds of airplanes looking for possible scale subjects and submit that this is one of the best of the lot. It fits into AMA scale competition in more respects than any other I have ever investigated. Check some of these advantages:

1. High aspect ratio wing with a thick section. An ideal setup which may be flown and maneuvered at high wing loadings without having a snap-roller on your hands.
2. Ample tail area. By not requiring any enlargement it will be possible to gain maximum points in scale fidelity judging.
3. Wide track tricycle gear. Although, rule changes have been made making things easier for airplanes with narrow, ground-loopy 2 wheel gear, you still want to get the airplane up and down safely and with a little dignity.
4. Scale operations. Few airplanes offer so many scoring possibilities for point gains in the gadget department: Retracting gear, flaps, carrier arrester hook plus four stores pylons to carry bombs, rockets, smoke screen, land mines, drop tanks, etc.
5. Low frontal area. Try any other radial engine monoplane or even most any inline engine type and you'll see the contrast.
6. Clean, relatively simple lines without fillets. Low wing layout for contest condition flying.
7. Last, but not least, that intangible something that makes military airplanes a little more attractive than civil craft.

About the only important debit that can be chalked up against the design is that the low frontal area brings with it the problem of too small a cowl to completely hide the engine. However, by inverting, the damage to appearance is negligible. With the head outside in the slipstream a valuable sub-advantage is gained in eliminating the overheating ever present with enclosed engines.

I considered for a long time trying a retracting gear on the Skypirate - the lure of 20 points is strong. Commercially available units work fine on the relatively short and light weight LG of the standard size multi but would be more than a little strained on a scale of this size and wing loading. A specially built layout might take the punishment, but would be heavy and difficult to build. It comes down to a gamble in either case and I have seen as many points lost as gained playing this particular slot machine - a belly landing doesn't get many perfection points!

Another good argument can be developed in favor of a fixed gear. Note that in the AMA rules the gear is worth 25 points for scale fidelity and 25 points for workmanship. For retraction you are pretty much restricted to stark simplicity or run the chance of overloading the mechanisms. With a fixed super-detailed gear you can not only gain more fidelity and workmanship points under the landing gear category but also improve the overall general appearance and raise your score in that section also. It seems likely the retracting gear points can be pretty much retrieved in scale judging without any 'Look, Ma - no wheels!' incidents.

The model is 1-3/4 in to 1ft scale, giving an 84 in span. Wing area is 864 sq in or 6 sq ft. With a full load of dope and details aboard, this adds up to a 29 oz wing loading at around 11 pounds. I'm sure it could be built lighter by a builder not so addicted to epoxy and fillercoat.

Most notable contest win of the model was first place at the 1965 Nationals R/C scale event. Later it took first in the RCM Design Contest. Most recent placing was 3rd at the Hastings, Nebraska meet..." 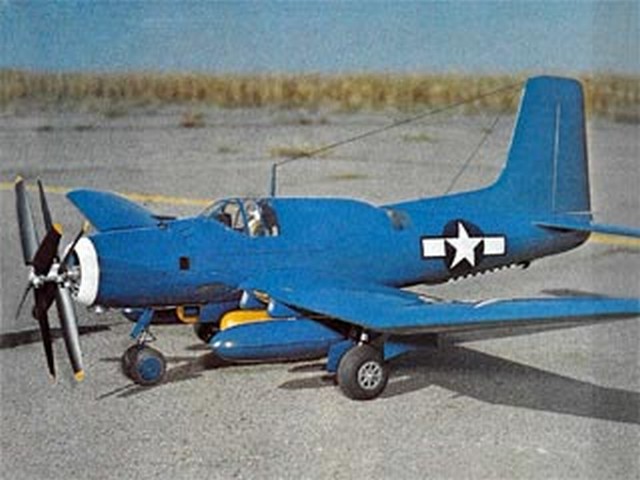