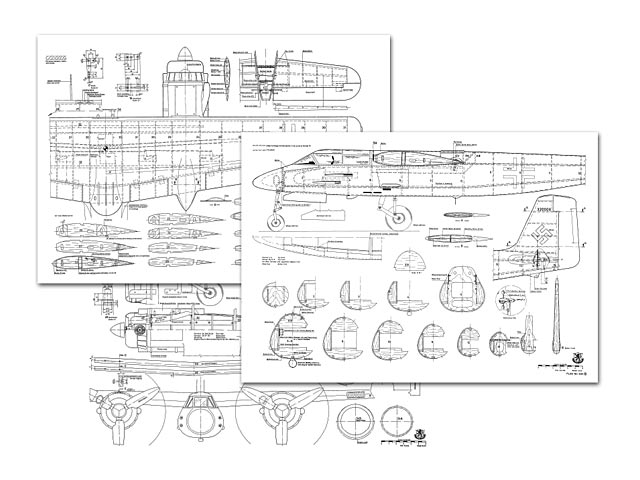 Twin engine scale model has been on my building agenda for a long time. I was looking at various types such as the Grumman Tigercat, the Martin Marauder, and the Me-262. I had already finished a plan of the Tigercat when I saw an article about the FW Ta 154. Full of enthusiasm about this plane, I hung the Tigercat to the famous nail on the wall and began the design and subsequent construction of a scale version of the FW Ta 154. The simple and clean lines of this plane fascinated me and everything seemed perfectly set up for an R/C scale model.

According to the new rules for scale R/C aircraft, this design would have to be classified as semi-scale. However, this fact should not dampen your enthusiasm for this. The sound of two engines at high rpm's can even be felt in your fingertips much like a trumpet solo by Louis Armstrong. And you will find, upon completing your model and making the first test flights, that scale regulations just aren't important any more as you make a high speed pass two feet off the deck with your Ta-154, or gaining velocity to execute a perfect loop.

Built-up mainly from balsa, plywood and hardwood, the construction materials are almost identical to what was used on the full size aircraft. Two main balsa longitudinal sides are reinforced with plywood where
necessary and are the basis of the fuselage structure. The formers are glued in segments to this basic structure. This is then covered with 1/8 balsa sheet to obtain a light, but rigid, and torsionally stiff fuselage.

I exercised a lot of care in the design and construction of the wing. The airfoil at the wing root is an NACA 2417. The wing section remains identical out to the engine location and tapers from there by about 3%. The angle of attack of the center section is two degrees which is reduced to 0 degrees at the wing tips. The tolerances on the wing have to be kept to a minimum since they all have an influence on the performance, especaily due to variations in the engine thrust angles!

From my early experiences with the Orion (oz927) designed years ago by Ed Kazakirski, I remembered the problems I encountered building a perfect wing with the landing gear mounts. Therefore, I looked for a Way to mount the engine mounts only after completing the wing. This can he done by cutting the wing sheeting in the area of the motor mounts and to bolt and glue the formers each to the lower portion of the wing spar. These formers are the basis for the engine mounts and the cowls which cover the cut-out in the wing sheeting when cornplated. This design provides a rigid attachment of the engines to the wing, which is of absolute importance due to the relatively long motor mounts. We also have to consider that this construction is not only the basis for holding the engines, but also for the landing gear and the throttle servo as well as the cowl.

I was studying the installation of a retractable landing gear, however, I decided to use a rigid, but scale, version of the original gear. The main reason for this decision was the fact that I was not satisfied with the reliability of the available retractable gears for heavy scale models. The experience with the unique scale landing gear, even on rough ground, proved to be exceptionally good.

For the engine exhaust, an ideal solution could easily be found simply by modifying the mufflers and installing a flexible rubber hose so that the exhaust gas can be fed directly into the flame tube on the muffler side. The aesthetics of the model are not disturbed by this modification and there is a high degree of protection for the. model against exhaust residue. The accessability of the mufflers and tanks is good due to a bolted-on cover..." 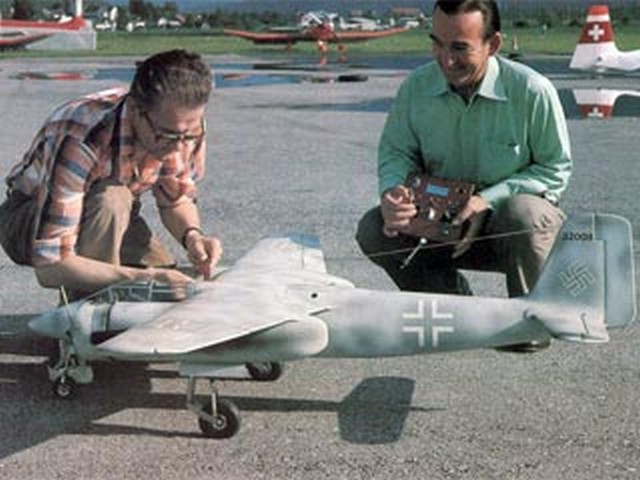 Hi Steve, Mr Meier is from Switzerland. His first name is not Frank but Franz. The German Mosquito plan is one of his Best... Great for electric power conversion... Regards,
Pascal - 19/09/2014
Fixed the listing for this one, thanks.
SteveWMD - 19/09/2014
Add a comment