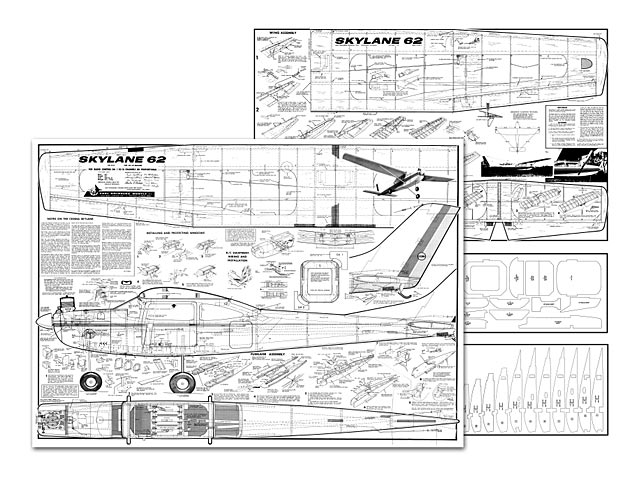 Quote: "Not surprisingly, when it took to the air, the familiar characteristics of smooth and easy flying, coupled with great load carrying ability, were repeated. The first ship was flown on rudder, elevator/ and engine. Response to rudder was strong, showing that with its great inherent stability the ship can definitely be flown on rudder-only. In this configuration, weight should be in the vicinity of 4 lbs, and a good 19 would be adequate power for sport flying. Our prototypes have an OS Max 35S R/C, which has plenty of reserve power for the ship's 5 lb. weight with multi equipment. One of the most enjoyable aspects of using this engine, besides its easy starting, was the way you could let it idle for minutes at a time while the ship cruised around at altitude, slowly descending, and then opening the throttle which showed to the surprise of onlookers that the engine was still there and ready to deliver."

Quote: "This is the Skylane that Carl Goldberg made which was based on his extremely successful 42in version. He once stated that he had hundreds of requests for this model. It took him some time to develop the kit but finally, around 1967 or 1968 he launched it. It was an immediate success!! Excellent flyer and very attractive although it is just semi-scale. This plan was extremely difficult to get but finally. we have it". 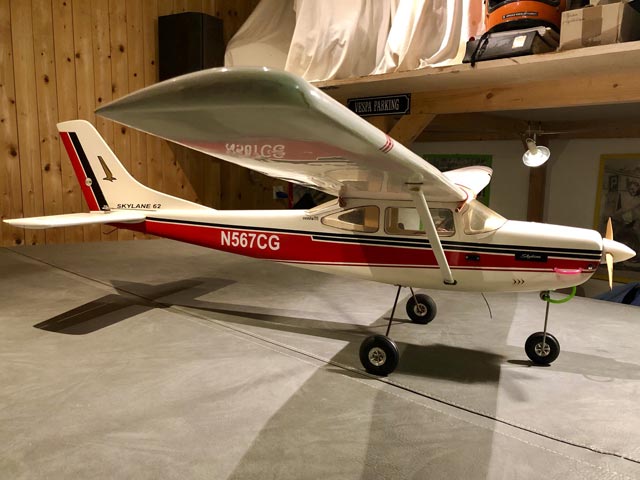 This plans are manipulated in such way that the dimensions horizontally are good but vertically are wrong it needs to adjust vertically 10% bigger.
anon - 16/02/2017
I think you're right. Checking to compare width and height of the main wheel, it does look distorted.
SteveWMD - 16/02/2017
Cessna Skylane 62 on floats, built from Goldberg kit, ST 46 engine, flaps, Kraft radio, (1975) [more pics 003].
JesusAbellan - 28/02/2017
I had this kit when I was a kid, I noticed the main wheels seemed distorted like this on the original plans. I think the dimensions on this set is correct.
ChrisS - 22/04/2017
I have these plans and they are correct horizontally, but vertically they are off just a bit. Not sure if it's 10% or just less though.
anon - 05/09/2017
Hello, I live in Switzerland, this is my Skylane 62, it's a vintage kit [main pic, 004,005]. The engine is an OS Max 40 which is a little too powerful for the model. It was restored in winter 2019/2020, it is waiting for the end of the Coronavirus to make its first flight. It will fly with my Robbe (Futaba) Digital 6 radio from 1974, converted to 2.4ghz.
Jean-Michel Baertschi - 11/05/2020
Stunning plans. There are slight discrepancies so one needs to be careful and triple check before giving parts final cuts. We are just in the process of building it with my son. We have managed to secure OS35 R/C engine which is exactly what's suggested. Looking forward to flying it!
AR3 - 17/10/2021
Add a comment