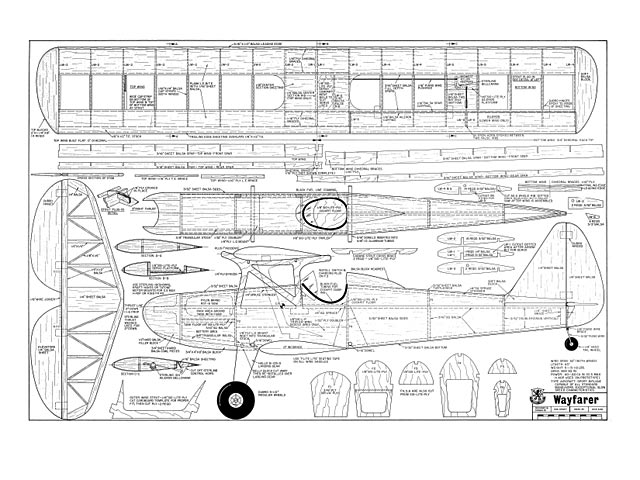 Quote: "One of the finest bipe's you'll ever fly - performs all the maneouvers in a realistic manner. Outstanding slow speed characteristics. Realistic performing sport biplane for .40 to .60 engines, by Don Dewey.

During the 1965 RCM Design Contest, we received a set of plans from a Dr DJ Gerner for a model that was later destined to become one of the all time favorites ever presented by RCM. Before presenting it for publication in the May 1966 issue, we constructed a prototype from the author's plans and virtually flew the pants off of it. This model was the Hobo (oz7166) a quickly built and easy-to-fly sport biplane for reeds or 3 channels of the new proportional systems.

The Hobo was an almost immediate success. It was a fun-type biplane that was extremely easy to fly, yet was rugged enough to withstand any type of rough field takeoffs and landings. Its slow speed characteristics were virtually phenomenal and it could be landed at a speed far slower than the normal stalling speed of most aircraft of its type. During the next two or three years, we wore out one Hobo and built at least two more, all of which were flown for many, many hours. All of the original Hobo prototypes required no takeoff corrections at all, and after exploring the sky at your leisure with a stable and easy to fly biplane and, as the author put it, "when you got tired of chasing the wind and playing tag with the birds, you could throttle back and come in for an effortless landing that would make the hot shots envious."

As proportional systems became more and more reliable, not to mention smaller and lighter in weight, we used the Hobo as a test bed for each of the new systems that came our way. The original prototype by the author weighed six pounds plus with the older and larger systems and, as the micro miniature proportional system became available to us, the weight of the plane lessened and we noticed an even greater increase in its performance characteristics. After a couple of years of flying with various radio systems, I decided to use the original Hobo's unique construction features in a new design that would retain its excellent handling capabilities and low speed characteristics while increasing its performance with the addition of ailerons and a reduction in the overall weight.

Thus, the Wayfarer was born. This model proved to be even more than we had anticipated when I started sketching the plans. In fact, the prototype is one of the best flying sport biplanes that we have seen at RCM. With 800 sq inches of wing area and an all-up weight of five pounds with the Kraft Series Seventy-One proportional system, it excels in the performance category with anything from a .40 to .60 engine. We used an OS Max H.40P engine on the prototype and found the airplane capable of all standard maneuvers while retaining the original and exceptional slow speed characteristics.

The overall wing loading is in the 15 to 16 ounce per square foot range which added considerably to those slow speed characteristics. Yet, under full power, the Wayfarer will climb out with the best of them and perform virtually all of the vertical maneuvers with ease..."

Update 14/01/2016: Replaced this plan with a better copy scanned from a fullsize plan, thanks to Balsaworkbench, scanning by Don at EAC, cleanup by theshadow. 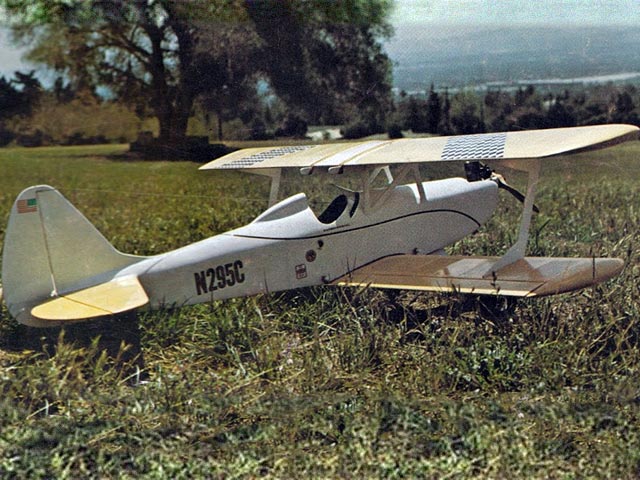 My best friend and I built these as per plan, the horizontal stab failed on each of them. We beefed them up and they flew great!
anon - 09/11/2017
Wayfarer Photos [more pics 005-012]. This plane was constructed per the RCM plans with the exception of adding electric propulsion and a nose similar to the Acro-Star (oz6256). I installed a NTM 4248-650KV motor, 60AMP ESC, 4-cell LIPO (3300mah), and a 14x7APC prop. Flies great with this setup. In order to allow the greatest amount of battery movement to balance the plane, I moved the elevator and rudder servos to the rear. This worked out fine. Thank you for hosting this wonderful site.
RonaldSwenson - 29/01/2019
Hi Mary, Here are some pictures of a Wayfarer I completed last fall [more pics 013-017]. It's powered with a Saito .56 and covered with Ultracote. I decided to give the airplane a more contemporary font for the aircraft name and went with a lively color scheme. It really looks good in the air.
A previous poster for this plan mentioned two stab failures. Believe it. It will fail sooner or later. I almost lost my Wayfarer airplane on its maiden flight because of the stab. I highly recommend building the stab with med hard, to hard, solid balsa sheet instead of the open framework.
For more details about my build of the Wayfarer and my scary maiden flight check out http://tslidehaven.com/wayfarerbuild.htm
Thanks again for the awesome website! Regards,
JohnnyB - 22/09/2019
Yes, the Wayfarer pilot really does like SPAM! Marinated in Teriyaki is his favorite! :-)
JohnnyB - 24/09/2019
Hi Mary, Back in June I emailed some pictures of my freshly refurbished Mini Super oz7900 for inclusion. In the message I mentioned the intention was to build a Wayfarer but I was having to wait for balsa deliveries due to excessive demand.
Roll on six weeks and here are some pictures of my newly constructed RCM Wayfarer oz5908 [more pics 018-022]. It has been a real pleasure to build this from a plan. During construction I decided to graft on an RCM Acro Star (oz6256) nose rather than use the open Wayfarer version since I have converted it to electric power. The difference in shape is just to the 3/4” side cheeks top and bottom forward of F1. The thrust line of the motor is exactly as the Wayfarer design but I needed to use a 2” instead of 2 ¼” dia spinner to keep the top deck in a straight line.
I am waiting for fair weather here in the UK to fly it hopefully in the very near future.
I picked the design because it is very well-proportioned and looked straightforward to build. I can say it absolutely met that criteria. The colours of the scheme do it justice even if I say so myself.
Once again thankyou for the resource that is Outerzone it has been great to look at past plans and the superb examples others have constructed from them. I might even have picked a possible next build too!
But that will have to wait until I’ve flown the others and get another period of free time? All the best,
NigelS - 24/08/2020
Hi Dears outerzone guys!!! I am very happy to write you!!! My name is Antonio Botta from Argentina. I would like to tell you that my Wayfarer (plan 5908) is an excellent plane!!! I built it during last year, finishing Just previous the pandemic, so I had the chance to do the maiden flight a weekend before that.
Here are some photos [023-027], one is my little girl doing the quality check!!! And the other is me, wearing proudly one of the couple of T shirts I bought from you. I flew it again for the second time after the pandemic. You are doing an excellent Job for the R/C world!! Best regards!! Thanks a lot!!
AntonioB - 21/09/2020
Add a comment