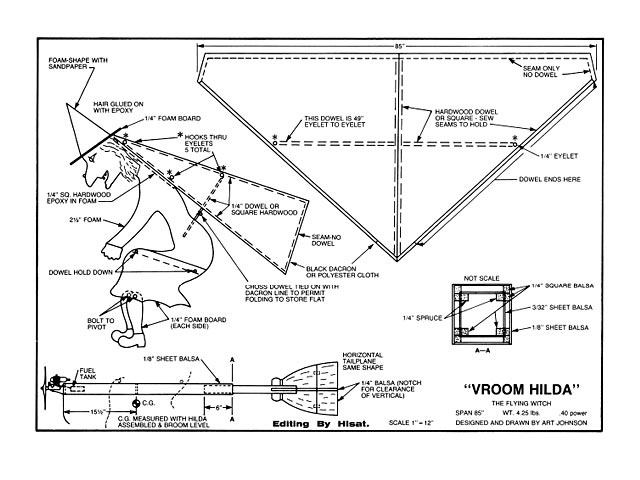 Salem Approach Control, this is Vroom-Hilda, requesting clearance to make a high speed low pass - but no landing! Our flying sorcerress is too realistic looking to risk landing in Massachusetts.

Everyone knows that witches are pretty hot broomstick pilots. Ask anyone and they will tell you that broomsticks have been standard witches flight mount since long before the Salem trials. At the same time, if you ask: When was the last time you actually saw a witch fly? - you will probably get some strange looks and a little head shaking. Well, you can have one-up on all the doubters now. Witches can fly and you can prove it to anyone with a little help from your R/C thumbs.

Vroom Hilda actually got her start when our Florida Air Show Team was scheduled for a major air show in Miami just three days before Halloween. My wife, Charlotte, convinced me that this show would be a natural for a Flying Witch. She even offered to help build it. Boy, is that an offer you can't refuse!

The only problem was that neither of us knew anything about building a witch that would fly. The witch was no problem. Everyone knows what a witch looks like. The broom looked easy too. Just make it one to one scale - from the broom out in the garage. A Rogallo wing cape seemed like the way to get lift but I did not know anything about flying Rogallo wings. I did recall John Worth's original tests of a Rogallo wing for NASA when I was at Langley Field in the late fifties. My memory is not very good though and the size, loadings, etc., for John's R/C test model were rather vague in my mind.

Help came at this critical time from the owners of a local hobby shop. George and Dottie Dennis suggested a Rogallo wing kite design they had on hand which would lift four and a half pounds. With a little modification the design turned out to be just the ticket. Charlotte sewed up the cape (wing) and added decorative touches to the witch while I put the other parts together. Vroom Hilda was ready a week before the big show.

Not wanting to embarrass ourselves if it did not fly, my wife and I took the witch out to the local field late in the day when no one was around. I could not think of any way to gradually test for air-worthiness..." 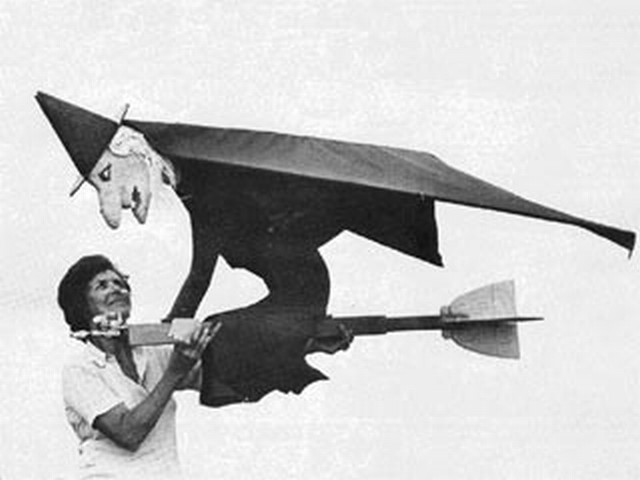