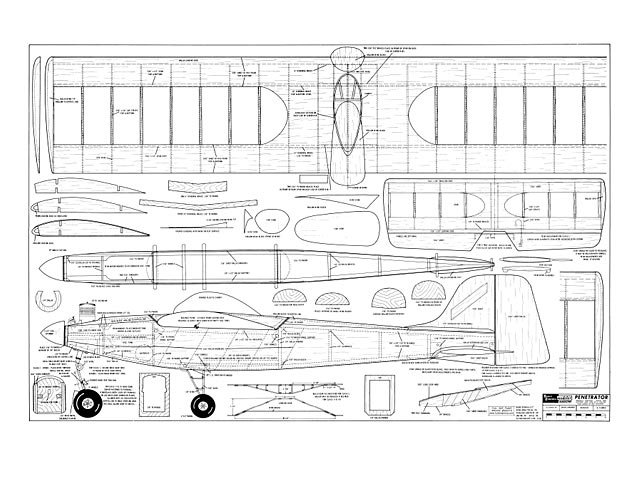 Quote: "The first place winner of sixteen consecutive class I contests, including the 1965 Nationals, reveals the new look.

THE Penetrator, designed to fly as a Class I plane, should also make an excellent Class II model for the Sunday, or the contest flyer. It has a wing span of 61-1/2 inches, overall area of 738 sq inches, and a length 45-1/4 inches. It weighs 6 lbs, and takes a .45 to .61 engine. The Penetrator that I am now flying is powered by a Merco 61, the extra power of the big mill needed for contest flying.

I designed the Penetrator mainly to provide a stable ship for the average Sunday flyer as well as a contest ship for the experienced pilot. I also had in mind a ship that would match the beauty and sleek lines of many of the Class III models.

In its intended field, the Penetrator has proven to be an outstanding Class I contest ship. It is a ship that performs exceptionally well on reeds or proportional. I won the Class I event at the King Orange on reeds; however, since then I have changed to Orbit proportional. The wing design has proven to be ideal for contest flying, and has eliminated the excessive ballooning tend-ency found in most Class I ships. With the Penetrator properly trimmed, you will find that it pulls out of maneuvers straight and level, and does all maneuvers exceptionally well, including the spins. You will be happy to know that you can get a spin every time, and with a little practice, will find that it pulls out on the proper heading, straight and level. As you know, most model designing is nothing more than trial and error plus 'past experience. That .is what put into the design of the Pene-trator, and believe me, it paid off! The Penetrator flys better than any of my previous Class I models, including the one I used at the 65 NATS.

It is my belief that getting away from the old 'box-type' planes will create more interest in Class I. Many flyers want a ship with the lines and beauty of the sleek looking multi jobs. This is another feature that was included in the design of The Penetrator. It is a shoulder wing job that is sure to catch the eye of the spectators.

I'm also hoping that, by designing a plane that can match the features of the Multi, we can create more interest in Class I from all concerned, especially the officials of AMA. We have suffered, due to the continued suggestions from some, that we change the Class I event... the thing that we Class I flyers are trying to get over to AMA is that we are not looking for some sort of a kite flying contest, that we like the event as it is and that we merely want the same consideration for all Classes. Class I is experiencing continued growth, and with. proper support, could grow by leaps and bounds. Most everyone is aware of the fact that there is more of a challenge to flying Class I than any other Class. It is my belief that better look-ing and better performing Class I planes will create more interest, meaning, and an even more rapid growth than we are now experiencing.

Construction. The fuselage sides are cut from 3/32 balsa. Be sure to follow plans so as to have approximately 5/16 inch incidence under the front of the wing. The sides extend approximately 1/8 in front of the forward firewall. Mark the location of the 1/8 plywood former before gluing in place the two nose doublers on each side of the fuselage... " 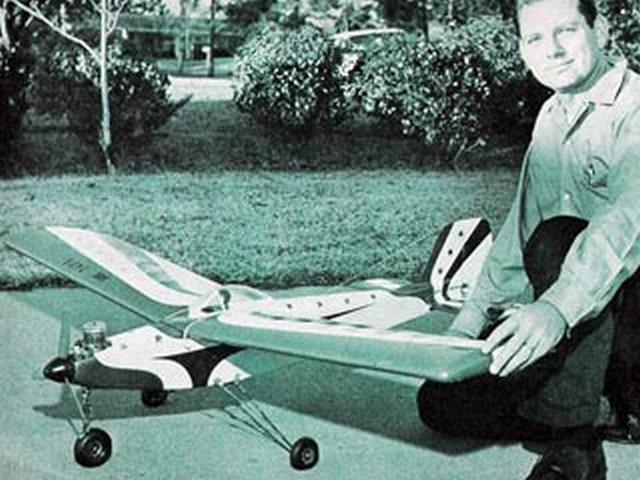