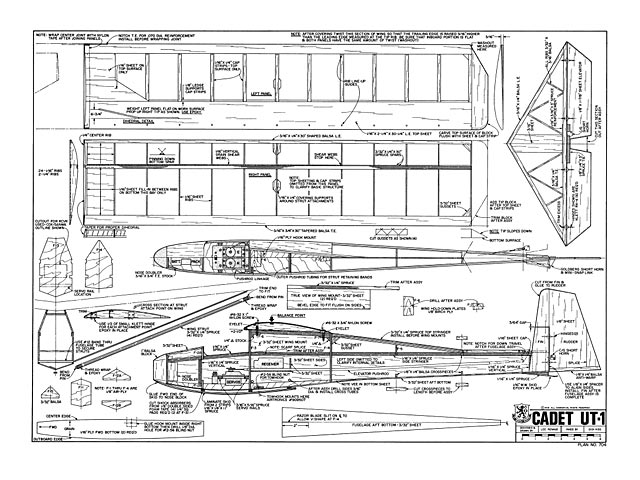 Quote: "Cadet UT-1 by Lee Renaud. With the interest in Stand-Off Scale sailplanes growing by leaps and bounds, the Cadet UT-1 is a natural for competition or general sport flying,

This two-channel sailplane is a Stand-Off Scale model suitable for general sport flying or a quickly built competitive ship. With interest in Stand-Off Scale sailplanes increasing, this simple design will let you fly another event with a minimum investment in time and materials. The nostalgic design also provides a welcome change from the sterile appearance of the modern fiberglass sailplanes.

Despite the small size and simple construction, the Cadet tows very well on hi-start or winch, and will turn in outstanding thermal flights. Control response is excellent and the overall performance is similar to most non-scale designs of this size. If you are looking for a fun ship with a different look, clean off your work-bench and order the full-size plans. A visit to your local hobby shop will provide all the materials without straining the budget.

The Cadet UT-1 was first ftown in May 1943, at Meriden, Connecticut, and was built in Brooliyn, New York. The design of the Kirby was mddified to suit American requirements, both structurally and aerodynamically, but overall performance was quite similar. Maximum glide angle was 14.7:1 at 31 mph, and the stall speed was 25 mph. Sinking speed was around four fps at the 30 mph speed. Red line air speed was 65 mph, certainly not a high performance ship by today's standards.

Construction was all wood except for the struts, fittings and control systems. With an empty weight of 276 pounds and a maximum gross of 450 pounds, the wing loading was only 2.6 pounds per square foot, The Cadet completed a test program of nearly 200 flights, and an Airworthiness Certificate was granted in November 1943. A company was formed to manufacture kits of the Cadet, but the he venture became a casualty of VJ day, along with many similar enterprises.

Horizontal Tail Assembly: Notch the etevator leading edge for the 1/8 x 1/4 in spruce elevator tie. Epoxy the tie in place and pin the elevator in place over the plan. Cut the stabilizer outline from 3/16 x 1/4 strip and pin in place over the plan. Be sure the joints fit tightly for maximum strength, install the trailing edge reinforcement and 3/16 sheet center rib, then cut the rest of the ribs..." 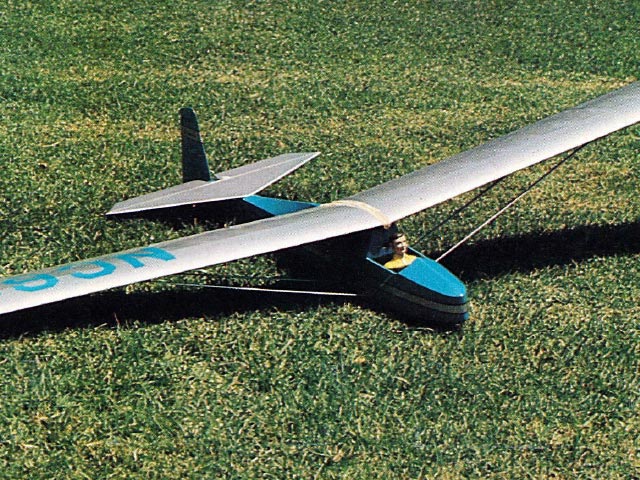