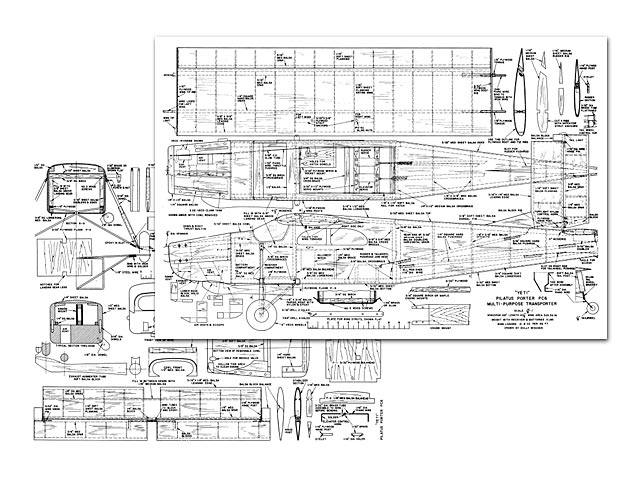 There is considerable variation in opinion of what constitutes a pretty airplane. Some prefer sweeping curves and elliptical wing outlines, while others like straight lines with a long, slender appearance. The Pilatus Porter is obviously neither of these; its utilitarian shape is square to the extent that it seems to have been built in long lengths which were then sawn off into shorter chunks. However, in spite of those functional lines, her designers have come up with an airplane that has an appeal to any person who feels an affinity for things that fly, and I suspect that I am one of these.

The model was inspired by the reading of the mountaineering book 'The Ascent of Dhaulagiri,' a narrative of the successful 1960 Swiss Expedition to climb the 26,795 foot mountain, Dhaulagiri, in Nepal. At that time it was the highest unclimbed mountain in the world. The Swiss used the airplane to supply the high camps in place of many Nepalese porters. The Pilatus Porter made between twenty and thirty landings at altitudes from 15,000 to 19,000 feet - and holds the world record for a landing at 19,200 feet. All of these landings were made with loads such as carrying 1,500 pounds of rice to a glacier at 15,000 feet. For this type of work the Porter is equipped with a combination of skis and wheels, the skis being hydraulically raised or lowered depending on the surface encountered. The expedition plane was christened 'Yeti', the Nepalese word for the elusive abominable snowman.

The Porter is a product of the Pilatus Aircraft Works of Stans, Switzerland, who generously supplied us volumes of necessary information and drawings. It is the most outstanding of the STOL aircraft. Powered by a geared supercharged Lycoming six cylinder engine of 340-hp, it can lift a useful load of 1,900 pounds with a ground run of 525 feet and a landing run of only 330 feet. Cruising speed is 125 mph, top speed is 145, and it stalls at 43. A later version employing the Turbomeca Astazou turboprop powerplant (see Cal Smith's cover painting) has even more spectacular performance.

A prominent feature is the exhaust augmenter tube which also carries off the air used for cooling the engine. The wing trailing edge is almost evenly divided between flaps and ailerons. The plane can carry seven passengers plus pilot, and is easily adaptable to photo, cargo, and parachute work, The first Porter was purchased by Hermann Geiger, the famous Swiss alpine pilot, for utility and rescue flights in Switzerland. 'Yeti' was the third plane built, and four others are operated by the International Red Cross in Nepal. The first in the United States was purchased by Wein Alaska Airlines.

Our model was developed around six channel multi equipment. The ailerons and flaps, although built separately and glued in place for realism, could easily be made operable if eight or ten channels are available. Since a plane like the Porter is not considered acrobatic, ailerons are not a requirement for realistic flight.

The space inside the model is so vast that any amount of electronic gear could easily be installed, but more power than the Veco .19 would be needed. In order to simulate the all-metal construction of the full size Porter, the model is entirely covered with sheet balsa. It is important to choose only the lightest wood for this purpose in order to keep the weight down to a reasonable five pounds or less.

The squareness of its outlines makes Yeti quite simple. Wing tip ribs and root ribs are the same shape, which means that the sight and left panels will be identical until strut anchors and end ribs are cemented in place. The airfoil employed for the model is an NACA 2414, quite different from the reflexed high lift airfoil of the prototype. Aerodynamically this change was not absolutely necessary, but an undercambered airfoil is more difficult to construct and it was considered a good idea to concur with usual R/C practice. As it turned out the choice was a good one since the plane flew well, without any adjustments, on its first flight. While the model has little dihedral this does not affect its performance adversely since the center of gravity is low.

Every scale modeler has a problem with the horizontal stabilizer because it usually has too small an area compared with modeling practice. In this case the decision was made to conform with the scale area, as this helps in obtaining maximum scale points in a contest. A bonus benefit derived from the small stab is that the plane takes off well even though the main landing wheels are quite far ahead of the center of gravity. The usual ground loop doesn't develop because the tail wheel stays on the ground until a good speed is built up, and by that time the large fin and rudder take over to hold the plane in a straight line take-off. Past experience had shown that an oversize stabilizer will cause the tail to lift too early with a resultant ground loop. Once airborne the Porter has all the stability of the full size plane, showing no bad handling characteristics. (My husband calls it an old ladies' airplane).

The fuselage conforms with present day R/C construction practice with minor variations. A large hatch in the roof permits easy access to a cavernous interior, where the Annco servos, mounted on the floor, appear lost. Batteries and receiver are wrapped in foam and placed at the front. Fuselage sides have doublers extending from the cabin rear to the firewall. Forward from this point the nose is solid balsa underneath, with a built-up balsa cowl covering the engine and fuel tank. The unique landing gear extends from the fuselage centerline and due to its length is quite springy. It has a very realistic soft action in landing, and has saved the plane from damage on occasion. Spoked Veco wheels closely simulate those used on the prototype Porter. Dummy shock struts are actually telescoping birch dowels, and serve no purpose in load carrying.

Fastening the wings to the fuselage sides permits the windshield to be made in one piece for greater scale fidelity, but this means that the wing halves must be keyed accurately by tongues extending from the wing roots through alignment holes..." 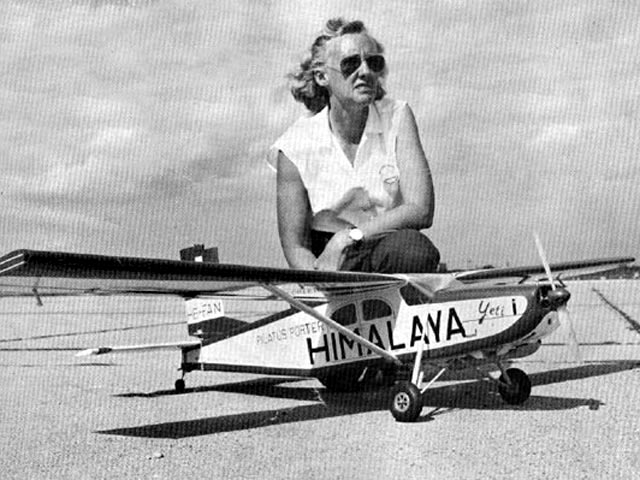 The most valuable and delightful aeromodellers are women.
Andrew - 13/04/2019
Says the scale is “ 1-3/8” = 1’. “ No such thing to my knowledge. It’s certainly not on an architect or engineering scale, is it something on some industrial design scale? What is it?
Howard Barnett - 13/09/2021
That's the ratio. The scaling. It just is what it is. You may find this an uncommon choice of scaling. So do I. But to say there is no such thing? The ratio clearly exists. As does the model. It shows up in photographs :)
SteveWMD - 13/09/2021
Howard, before decimalisation became current in Angloplaces until rather recently this was one of the usual ways to state scale ratios in inches, feet, etc, please see here: https://en.wikipedia.org/wiki/Imperial_units
Therefore developing 1-3/8” = 1’ we have:
=> 1in + 3/8in = 1ft (12in)
=> 11/8 in = 96/8in
=> 1/8.727272... an infinite periodic decimal*
This sounds rather awkward but back then it did make sense, and if you grew under the Imperial system this was natural to you.
I was schooled in the SI system but learnt to handle Imperial units from an early age as all my air modelling magazines were British or USA, and my balsa came in inch fractions. I had to adapt in order to survive, even though my models still regularly crash whatever the unit system employed.
* see this one too: https://encyclopedia2.thefreedictionary.com/Infinite+Periodic+Decimal
Miguel - 13/09/2021
It would be better if I add a practical example. Say you have a stabilizer spanning 9 1/2ft to be scaled down to the scale factor above (1 3/8" = 1'). What do you do? Simple. Adding parentheses for visibility, you multiply (9 1/2) by (1 3/8), your scale stabilizer then spans (13 1/16")! Or 331.7675mm in a decent system after factoring in the 25.4 mm = 1" conversion :-)
Miguel - 13/09/2021
The wingspan of the full size PC-6 is listed as 52 ft. Using the 1-3/8"=1 ft scale, the model's span should be 71.5". (measures ~68") Details, details....
DaveD - 13/09/2021
Hi Steve, When I was preparing myself to answer Howard Barnett’s ‘*weird scale’* musings, Miguel charged along and answered it better than I would be able to. But a few more lines might not come amiss?
As far as modelling goes, ‘weird’ scales have been part of it for several decades now and us, common SI mortals, simply had to adapt. For instance, the most common plastic aircraft model kit scales (judging by kit releases) still are 1/72 and 1/48.
Taking Miguel’s explanation, they become easier to understand:
1/72: 1” = 6’ (one inch on the model represents 6 feet on the prototype) =>
1” = 6 X 12” => 1/72
Same for 1/48: 1“ = 4’ => 1” = 4 X 12” => 1/48.
A once common aeromodelling scale was 1 ½” = 1’ => 1/8 scale, quite handy for small single-engined aircraft (eg, WW I fighters). Why adopt such an odd scale as *1 3/8” = 1’* then? The reason might be it would give the wing area the designer wanted/needed or, believe it or not, it might simply be dictated by the available wheels… The great, late Eric Coates (UK) said so himself.
As for Miguel’s aptitude for crashing his models, whatever the scale, it’s a professional hazard I suppose. He spent so much time building roads and such that ‘planting’ things on the ground became second nature to him...
Arnaldo - 13/09/2021
DaveD... the early Porters had a wingspan of 49'8", before revised "upturned" tips added about 2'5" overall to the span (52'1"). This is a model of the early version. So, 1-3/8 applied to a 49'8" span gives 68.29, or around 68.35". If anyone wants to rant about the 0.35", by all means, feel free ;-)
RC Yeager - 13/09/2021
First of all my tribute to designer/builder Molly Wischer. Women tend to be more sensible in insulating themselves from this soul-destroying hobby, which contains so much watching other people crash their models! The article says 'Yeti' was the third plane built, and four others are operated by the International Red Cross in Nepal", implying that 7 had been made by then. It appears total numbers went up to 600 until the line closed recently. From small beginnings...
As for my own crashing, I grant Arnaldo a point, everything built on the ground tends to return to same with more or less haste, and no, I don't use road-tar for dope. His allusion to 1/72 and 1/48 scales is odd, I know he flies the occasional peanut or smaller but these scales are in the sesame seed range.
Finally, to RC Yeager: 0.35" is thicker than a split hair, so it definitely is a legitimate subject for ranting :-)
Miguel - 14/09/2021
Add a comment