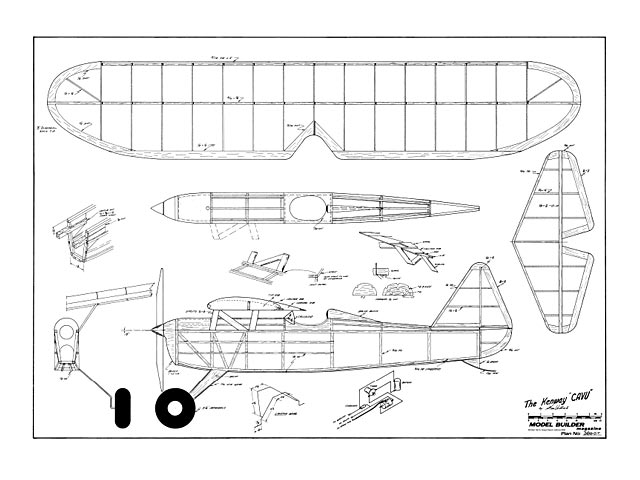 The Miget Cavu (oz1081) plan was first published in 1938 MAN. This here is a later re-drawn plan in MB 1986, enlarged up to full-size thanks to theshadow.

This cute little 44-inch span parasol may never wipe out the competition in a thermal soaring event, but it couldn't be any more suitable for plain and simple sport flying. In its original free flight configuration, it can provide hours of consistent, realistic small field short hops. Converted to R/C, for which it's a natural, it would be a perfect little one-piece aircraft for sport flying with three channels. An .09 to .15 engine should move it around in grand style.

The designer of CAVU should need no introduction to modern day modelers, and if he does it's because a few of you may not realize that some catalogs also contain feature articles! And as Ken Willard stated in his original CAVU story in the April 1938 issue of MAN, the name is based on the standard aviation abbreviation 'Ceiling and Visibility Unlimited,' a weather condition appreciated by all aviators and model aircrafters!

Construction of CAVU is so basic as to need no clarifying to anyone who can scratchbuild. A few suggestions: to allow for an occasional ground loop or similar mismaneuver, it might be advantageous to mount skis on top of the cabane struts, permitting the wing to be attached with rubber bands. Instead or wrapping the landing gear to the bottom crosspieces fuselage, held in place with ply gussets, and plug in the strut halves after the covering is applied. Hot Stuff will keep the struts in place. The 3-1/4 inch wheels may seem oversize but they add to the character of the model and help absorb shocks of those many touch-and-goes you'll want to shoot if you add R/C.

Believe it or not, Ken actually specified the balance point, this being in an age when such a thing yeas seldom mentioned in construction articles. It's at Station 3, where the diagonal cabane strut meets the fuselage." 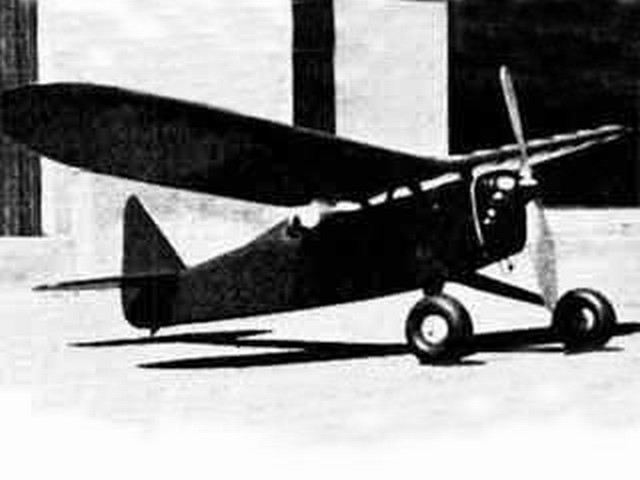