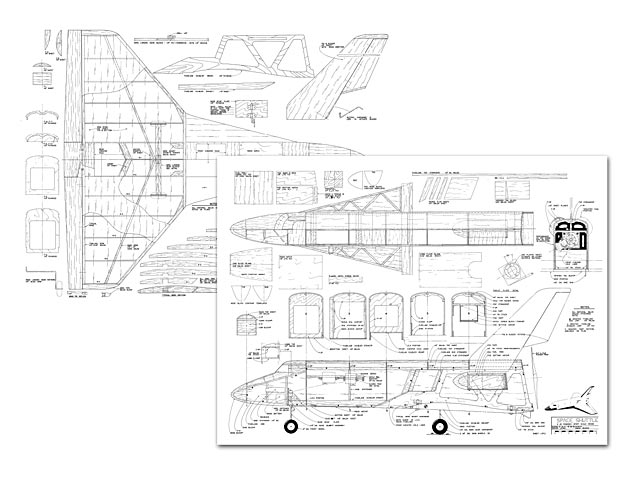 The future space shuttle will be capable of taking off by itself, but we can build one right now.

It was back nine years ago when I watched the Columbia return and touch down on the runway so nice. Was it possible for me to build one like this? It was really a challenge because so far there was not such an R/C model available. I learned that someone had already made such a model, but it had to be carried aloft by another airplane. It was simply a glider with a very poor glide ratio. What I preferred, was an R/C model that could take off by itself and fly like a conventional aircraft. Since then, I worked hard on this project. I figured that the wing was too short to provide adequate lift, the fuselage was so bulky that it created drag, and it was impossible to place an engine in the nose which also created a lot of problems since it was not a conventional aircraft.

It took me about one year to design model #1, a close to scale model with fixed landing gear. A K&B 61 engine was nestled inside the fuselage so I cut a big cheater hole at the bottom of the fuselage. The wingspan was 41-1/4 in and the all-up weight was 9-3/4 lbs. How did it fly? Actually, it couldn't rotate from the surface because of the poor design of the air intake.

I realized that there was an inadequate volume of intake air supplied to the propeller and a quick modification was done. I removed the hatches which could be opened to start the engine and the model soon picked up ground speed and rotated. It was airborne for a few seconds and then stalled. I did not have a chance to react. It seemed that it was tail heavy.

The model was repaired and the weight distribution was rearranged. The next time out, I was very happy to achieve a complete and safe flight. The handling quality was very poor. I had to further improve upon it. I worked hard to figure out every negative factor. The wing was too short. it was a piece of cake to build a longer one. The fuselage was so bulky that it created drag and also reduced propeller efficiency, which was the real problem. After months of hard work and waking up several times in the middle of the night. I finally got an idea - I could design the fuselage to be a lifting body.

I gave considerable thought to figuring a layout that was as efficient as possible. yet not too complicated to build and repair (of course). Number 2 model had a smaller boxy like fuselage, and was powered by an O.S. 25 FSR engine which was mounted at the tail, swinging a 9 x 6 pusher prop. A crazy idea that I had was to build a constant thickness, flat plate wing, so I could concentrate to study the behavior of the lifting body. In order to provide sufficient volume of air to feed the propeller, I cut openings at the windshield (thinking about windows without glass). I installed two intake flaps at the fuselage sides, and cheater holes at the bottom. My theory was that airflow being accelerated by the prop, passed through the top surface of the fuselage and would form an undistributed laminate layer which should provide a certain amount of lift.

A test flight was amazing and proved my concept. The ugly little thing could fly. and even flew better than its big brother. On the following experiment, I gradually sealed the windshield, relocated the bottom cheater hole, tested different CG locations, changed the engine thrust line, which resulted in up thrust and left thrust. Yes, forget about right thrust and down thrust from the old book, The overall handling was satisfactory except whenever I chopped the throttle, the plane didn't glide well but rather sank like a hang glider. I then knew it was time to redesign the wing.

Number 3 model was modified from #2, employing a 6% flat bottom wing. With this wing, take-offs and landings were greatly improved. At this point, even though I had installed a tuned pipe, I was asking for more and more power and the 25 size engine just did not fulfill my goal.

Number 4 model was modified from #3. It was equipped with an O.S. 45 FSR engine with a tuned pipe, and two dummy thruster cowls were built on the tail for better scale realism. After several test flights, the engine thrust line was reset, bottom cheater holes were relocated to the rear and a 10 x 6 Graupner pusher prop was replaced by a 9 x 7.

Now the model was capable of loops, rolls. inverted flying, and straight up for a few hundred feet. It flew like a sportster. However, during an airshow in 1985, it was mid-aired by a Tigermoth, both models totaled; just a month before the 'Challenger' exploded.

The design was registered in 1987. The model presented in this article is based on model #4. If the RCM readers are interested in the aerodynamics and more flight characteristics, a separate article will follow if time allows.

Although the Shuttle is intended for experienced pilots the structure is simple. Retractable landing gear and a tuned pipe may be added with some modification. Some of the details may be different from conventional structures, so please read the instructions carefully before you start... "

Update 09/09/2014: Replaced this plan with a re-edited copy, thanks to nameless who pointed out the vertical scan fault (drag fault) on sheet 1, between F2 and F3. Have now corrected this as best I can, but careful builders should note the new vertical dotted line on sheet 1 and double check all dimensions that cross that fault line.

Item #1: Alternate version of the same plan, thanks to JPM. This is a scan of the drawings as they appeared in the magazine print, along with article text and bill of materials. Item #2: Article pages, text and pics, thanks to theshadow. 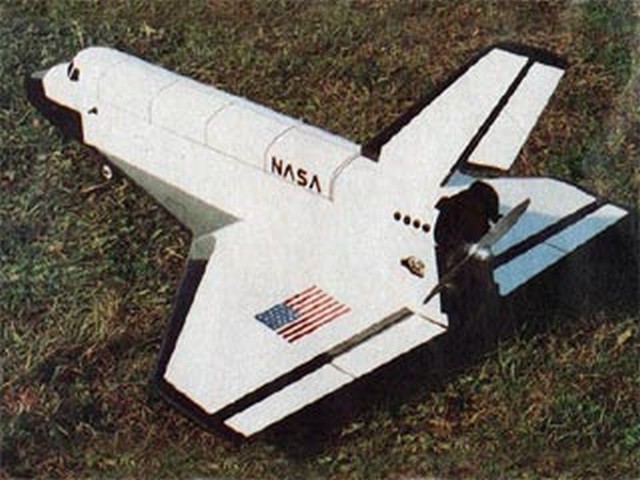 James Rand sent us in a couple of pics of his Space Shuttle model.
SteveWMD - 07/05/2021
How do the pushrods run for the rudder and ailerons?
Any pictures how they go?
Rob - 23/06/2022
For the Rudder look at the engine installation top right of page 1. Rudder control rod extends down into the body and the link can be seen just above the engine.
Aileron and Elevator are mixed by the sliding rails on the aileron servo mount. This setup was common before computer radios.
Jonathan Noon - 23/06/2022
Add a comment