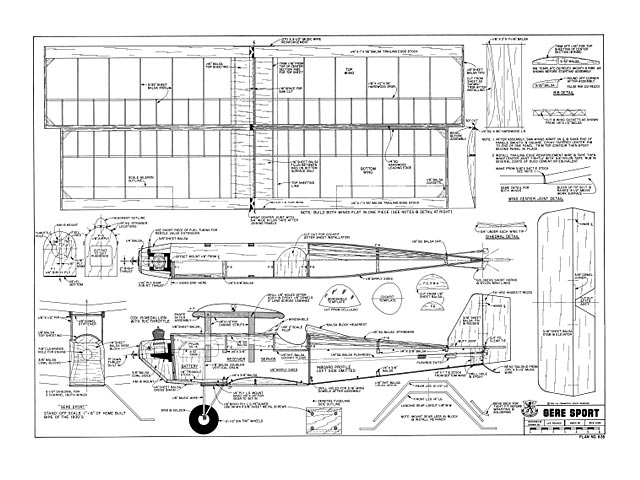 Quote: "Of the many hundreds of R/C aircraft that we at RCM have built over the years, few have given us as much pleasure as has the Stand-Off Scale Gere Sport biplane designed by our Soaring Editor, Lee Renaud.

A semi-scale model of the full size Gere, which was designed during the Depression by a 19 year old youth named Bud Gere, the full size aircraft never reached the level of popularity which the Heath Parasol and Pietenpol Aircamper enjoy. Yet, it was well designed for inexpensive home construction and for excellent flying characteristics. In fact, this 1930's era home-built was so good that it inspired the EAA biplane almost 30 years later. The original full size aircraft had all of the things that a good biplane should have including a fairly high aspect ratio, a clean, straightforward structure and large enough tail surface areas lacking on so many biplanes.

Lee Renaud's .09 to .15 R/C version of the Gere Sport retains all of the outstanding characteristics of Bud Gere's original design. The original prototype, which we had the pleasure of flying, utilized an OS Max .15 engine with stock Max muffler. As you may recall from an article entitled 'Police Story' in the December 1975 issue of RCM, the Gere Sport was clocked at 64.5 mph in level flight on a police radar unit. With generous amounts of control surface deflection, this three channel sport biplane will do a few maneuvers that haven't even been named as yet! At reduced throttle, or with an .09 or .10 engine, it flies extremely realistically and can be handled by any sport flier with a minimum of stick time. The glide ratio of Lee's Gere Sport is excellent and it will slow down to almost walking speed for a landing. As a matter of fact, you might even snap a thermal or two once you've cut the power!

All-in-all, Lee Renaud's Gere Sport is an outstanding, easy-to-build biplane that will perform according to your desires. It can be slow and docile and quite realistic in flight, as befitting the original full size Gere which used a four-cylinder overhead valve 1927 Chevrolet engine, or it can be fast and highly maneuverable, all depending upon your choice of engine and amount of throws to the control surface. So, if you like vintage type aircraft - and particularly vintage biplanes - and whether you like them hot, or slow and realistic, the Gere Sport will be one aircraft you'll enjoy for a long time to come. And, someday, after you've finally hung it up in retirement, you'll still be reminiscing about the fun you had with this .15 powered version of the Gere Sport. - - - - Don Dewey" 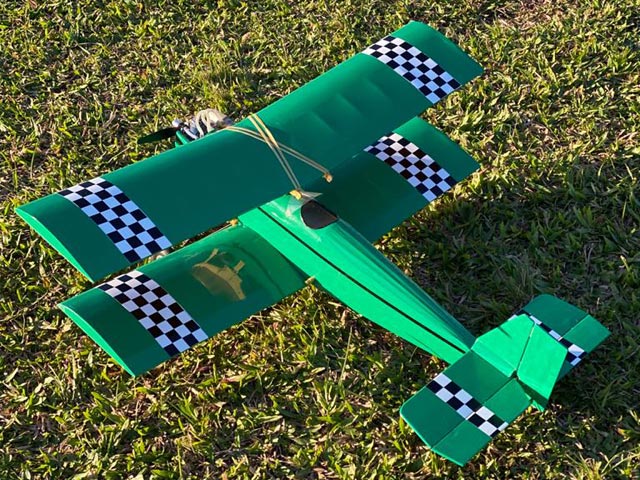