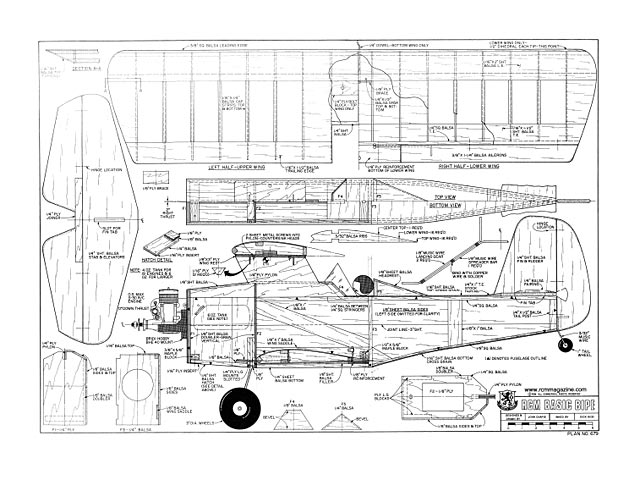 Quote: "RCM Basic Bipe - For .19 to .30 engines and four channels, this easy to build aircraft can be your introduction to the world of biplanes - by John Chapis.

I had the pleasure of flying the RCM Basic Trainer which belongs to my neighbor and photographer 'Chick' Allen, The flight characteristics are very impressive. While flying, we began a discussion about the modifications used to change the Basic Trainer into the RCM Sportster (oz6143).

Well, at this point I got a bright idea. Why not take things one step further - high-wing, low-wing, and now the biplane. The first attempt used the Sportster as the basis, but the outcome looked too much like the Pulsar Bipe. I wasn't looking for something like a hot pattern ship. I wanted a biplane that would bring back the thoughts of barnstorming like the Stearman and Great Lakes. Thus, the RCM Basic Bipe was born. Using the plans from the RCM Basic Trainer (oz8273) the following modifications were made:

1. Omit the nose block.
2. Extend the top of the fuselage to intersect with the firewall, thus enlarging the tank compartment and omitting the windshield.
3. Shorten the tail moment approximately 6' in.
4. Enlarge the tail surfaces to compensate for the increased wing area.
5. All other modifications were made to ease construction or improve looks.

After assembling the prototype, everything was checked out and the moment of truth came. The feeling that comes over you when all your dreams and expectations turn to reality is hard to put into words. But this is the way I felt as I made the initial flight tests. The only trim added was just a slight tap of down to keep the nose down in a 10 mph wind.

All flight characteristics are the same as the trainer with one big plus - the stall is very soft. But the proof is very evident on landing. Pull back the power on final, don't touch the elevator, and just keep the wings level. About 4 feet off the ground, start feeding up elevator very slowly. This will set you up in a slightly nose high attitude and kill any excess speed. Then, just before touch down, pull in full up and, very gently, the ship will plant all three wheels very nicely on the ground. This is the most impressive characteristic of the RCM Basic Bipe.

Enough talk, let's get to work and make all this literary imagery a reality for you. As with all biplanes, the work involved to build an extrawing can discourage the builder more quickly than anything else. So let's get the hard part done first. The wing should be constructed on a flat surface. I find that building over the plans doesn't allow you to use them for reference during construction and leaves the plans in poor shape after construction.

To construct a wing in this manner, transfer the rib location to the bottom planking of the wing. This is an easy process with the Basic Bipe which uses standard 36 in stock for the upper wing and 34 in of 36 in stock for the lower wing. Both wings can be constructed at the same time, if room in your workshop permits.

After laying out the bottom planking and cap strips, glue the bottom 1/4 x 1/2 spar on both wings..." 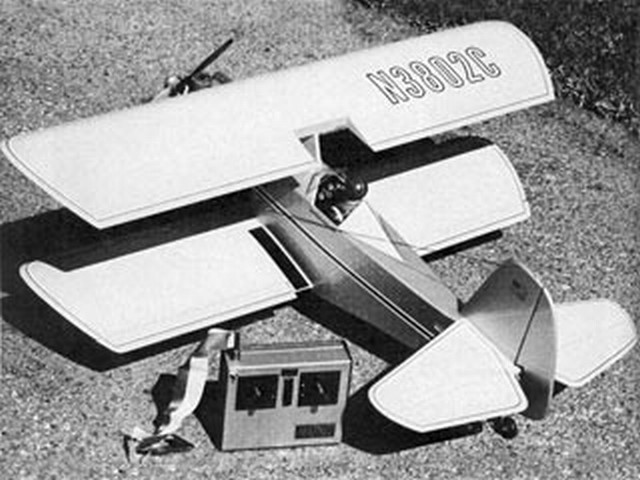 This is one of the most fun planes I have flown in the last 40 years. Just keep full up elevator when on the ground.
GregMcCullough - 02/09/2018
Add a comment