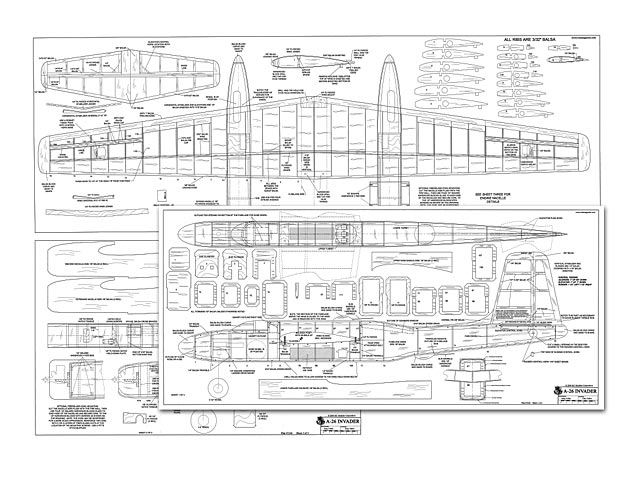 Quote: "The A-26 Invader was designed in the early 1940's as a replacement for the A-20, B-26 and B-25. It was an advanced aircraft for its day and it not only served in the Second World War but it also served in the Korean and Vietnam conflicts. With the success of the strafer nose used on the B-25 and A-20 in the Pacific theater, the Invader was initially designed with a solid nose containing eight .50 caliber machine guns in addition to its bomb load. During service trials in Europe it was found that a pathfinder version was needed with a clear nose and a bombardier position in place of the solid nose because the low-level attacks were too hazardous to perform in Europe.

The Invader entered combat in Europe in late 1944 and proved to be an outstanding combat aircraft. After the Second World War with the obsolescense of the Martin B-26 Marauder, the Invader was redesignated the B-26. It was called to combat during the Korean conflict where it was used as a night intruder attacking the North Korean transportation system and other targets. During the Vietnam conflict it was extensively modified and used in night attack operations on the Ho Chi Minh trail. The US Navy also used a version of the A-26, designated the JD-1 for target towing and drone launching.

I wanted to build a fairly large and simple twin engine scale plane for general weekend flying. It did not need to be exact scale, I just wanted it to be recognizable as a scale model and easy to build and maintain. Other A-26 models have been known to be good fliers, so I chose it as the basis for this design. I also tried to keep the cost down by designing it to use a pair of .40 sized engines.

The fuselage is built like most trainer and sport models utilizing sheet balsa for the top, bottom and sides. The tail surfaces are built up using 1/4 in balsa framework sheeted with 1/16 balsa. The wing is a fairly straightforward D-tube design with building tabs drawn on the ribs so it can be built flat on a building board. The engine nacelles are built like the fuselage and are open at the bottom for the landing gear to retract into. The nacelles are simply glued to the wing with epoxy using glass cloth for reinforcement.

I did not go to any great length to keep the weight down as I built my A-26 and it came out at around 12 lbs. I feel I could have saved some weight by using contest grade balsa and lighter retract units but I decided to use some retracts that I had on hand and I wanted to keep the cost of the wood down.

While this model of the A-26 is not geared toward the beginner, it is fairly simple to build. The flight characteristics are very good and show no bad habits provided both engines are running. Even if you do lose an engine, the plane is very controllable. The tricycle landing gear makes take-offs a breeze. If you have never built a twin engine model before, don't let that scare you away from building your own A-26. This simple one may be just what you are looking for.

Building the Fuselage: The sides are fairly long and you will need to splice on some additional wood to get the wood to the correct length and width. I recommend you make the splice in the wing saddle area that will be reinforced by the 1/8 balsa doubler. I also suggest you have the saddle doubler cut before you cut the fuselage sides so you can glue the doubler on to reinforce the splice joint as soon as the sides are cut. Don't forget to make a left side and a right side..."

Article pages, text and pics, thanks to hlsat.
Personal notes, thanks to Steve Sutherland [see comments]. 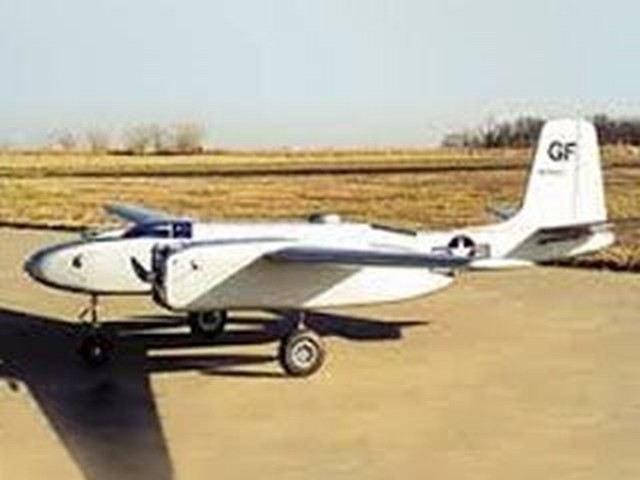 I first built this model in 2009. After my first flight I wrote some comments [see supplementary file]. I'm currently re-building the model as because of an error on my part the first one finished up in pieces. In contrast to the first model, I'm using Century jets electric retracts. I'm using the same Saito motors but mounted in the 2s position. As well, I'm covering the model in 1/2 oz fibreglass cloth using Deluxe Products EZE Kote. I would strongly encourage anyone to have a go at this build. It's easy to build and easy to fly. Just pay attention to engine reliability.
SteveSutherland - 10/09/2017
Add a comment