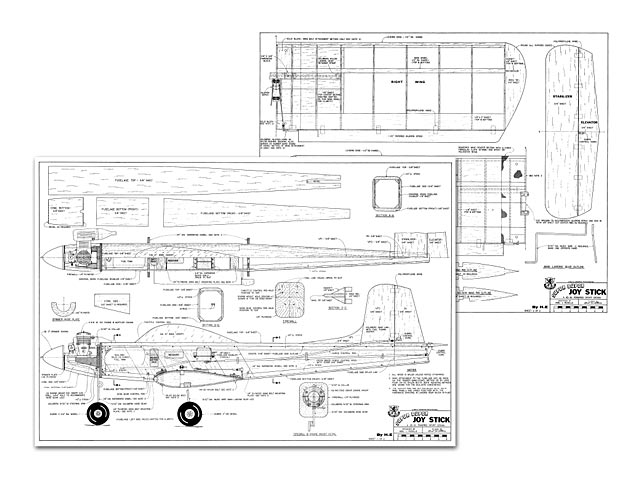 Quote: "Any of you modelers who have built Noel's Joy Stick will welcome this .60 version. It does all the good things the smaller one's do, only it does them easier and better.

The Super Duper Joy Stick is built from standard size balsa and although some splicing is necessary on the fuselage sides, I prefer this to buying 4 in wood and having a kit of scrap left over. If you have built any of the planes I have designed, the 1/2A Hornet (oz5419), Super Joy Stick and Joy Stick (oz1342), you will find that I follow the same basic theme in my designs and building techniques - simplicity and strength.

The Super Duper Joy Stick came about because I received many requests for a larger version of the Super Joy Stick, which is built for .25 engines and is an outstanding fun-fly and sport model. Unfortunately, some of the old timers are hung up on .60 size aircraft and won't fool with anything smaller. After blowing up the Joy Stick to the same size as an Ugly Stick (oz5175) and beefing it up to handle the extra loads, I built the first prototype and realized why they like big models better. There was no problem trying to jam all the radio gear in since there was loads of room: in fact, the one I just completed has an extra 12 ounce tank in it for smoke. Sixty size engines are also a welcome change from the smaller ones which can sometimes be a little temperamental. As for flight characteristics, big planes definitely fly better. The wind doesn't affect them as much and they can he seen at a greater distance. They also land a good deal slower because the wing loadings are usually much lighter.

Some of the comments that prompted this model came from die-hard Ugly Stick and Contender fliers. The comparisons they made to these great old standards were very favorable toward my Super Duper. They went like this: 'It is as stable a low wing airplane as you will ever fly and it's great for a novice flier's transition from a trainer to a full-house aircraft'' and 'In fun flys it is almost unbeatable, as it will take a pretty good bash without being put out of commission and it is extremely maneuverable and precise for spot landing and limbo type events.'

It is even a great model for breaking into pattern. I'mt not putting it into a class with pattern planes because its not, but for pre-novice through advanced class it is far better than a lit of planes the novices choose to fly and much more forgiving.

I could have written that the Super Duper won the Masters class at the Albuquerque pattern meet last summer and it did, but it was the only entry in that class so, although it performed all the maneuvers well and turned in a fair score, there was no competition, so you can see how rumors get started .The Super Duper did, however, turn in very respectable scores in pre-novice, novice and advanced, against some good competiion.

Where the Super Duper really comes into its own is in the hands of a Sunday flier, or at fun fly events.

A group of guys I fly with have been covering a lot of contests in the southwest and we fly the .25 size Joy Sticks. only we use .40 size engines in them. They are almost unbeatable in most of the fun fly events. They have all the power and maneuverability you could ever ask for in a fun fly type plane. Although the .60 size doesn't have the awesome vertical performance of the .40's, it is every bit as quick to land in a musical pylon contest and as precise an airplane as you could ever want in a blackjack or spot landing contest. We've flown in a lot of contests and the only thing that will consistently beat a Super Duper Joy Stick is another Super Duper Joy Stick.

So let's start building. First as always. familiarize yourself with the plans..." 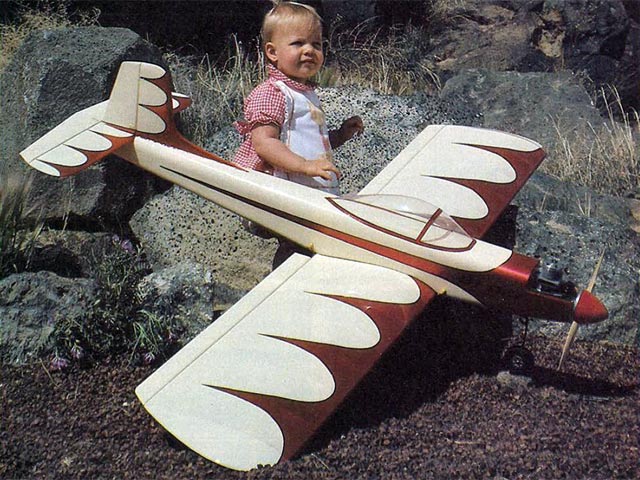 I built this plane [pics 004, 005] in November of 2020, very simple build. Flight characteristics are as advertised by the author. When I lay this plane on its side it holds a knife edge with literally no input, stays right where you put it. My judge of a great airplane is if I would build it again - I would definitely build this plane again. It is another timeless classic and thanks to Outerzone it is here to recreate. Try it you won’t be sorry!!
Martin Kolm - 20/03/2022
Thanks Martin Kolm!! Very encouraged by your review and pics of this design. I'm currently halfway through building this one, after completing the original 1/2a Joystick from the plans on this website. After reading your comments, I really can't wait to finish and fly this. I'm using an OS.46AX, but building as light as I can - what engine did you use?
Nick Ward - 15/05/2022
I've finished the overall SDJ build [pics 006-008], but have been a bit too successful (!?!) keeping the tail weight down using built up construction rather than the thick all sheet version of the original - I've had great difficulties getting the CG on the spar, so I'm externally mounting rud/elev servos at rear to reduce lead weight required at tail. Build log will follow once I've flown it. For others building this, stick to using the all sheet 3/8" balsa in tail, you'll need the weight as the nose moment is long - my battery is as far back as it will go already!
Nick Ward - 12/06/2022
Hi Mary and Steve, attached more pics of the Super Duper Joystick [009-012]. After several test flights, the SDJ has exceeded all expectations. The OS46AX swinging a 12x4" prop provides ample thrust with the aircraft's dry weight of just under 5 1/2 lbs, hauling it through large regular loops, outside loops, cuban eights, double rolls either way, immelman turns, split S's and inverted flight. The only aerobatic issues encountered so far were;-- consistent entering into spins in a traditional sense (ie use of full rudder/elevator), suggesting greater rudder movement was required and/or a slightly more rearward CG - consistent execution of stall turns, again perhaps requiring a little more rudder throw (or simply more practice by the pilot!).
The Super Duper Joystick really is a great flier, well worth the building effort. I would thoroughly recommend the OS46AX as a powerplant (or equivalent electric power) as I am using half throttle most of the time - a modern ball-raced 60 would probably overpower the airframe at this weight. Many thanks again for all your work in keeping this archive growing. Best regards,
Nick Ward - 26/06/2022
Hi Nick, it looks like you've built yourself a winner! Happy Landings :)
Miguel - 26/06/2022
Thanks Miguel! A quick mention and thanks must also go to one of my aeromodelling mates, Alan Collins, who took the last batch of photos including the inflight ones (no easy task!). Alan also intends to complete a Super Duper Joystick, so hopefully there'll be a few more pics to post. Full build log to follow once I've proof read it - thanks for watching.
Nick Ward - 27/06/2022
Add a comment