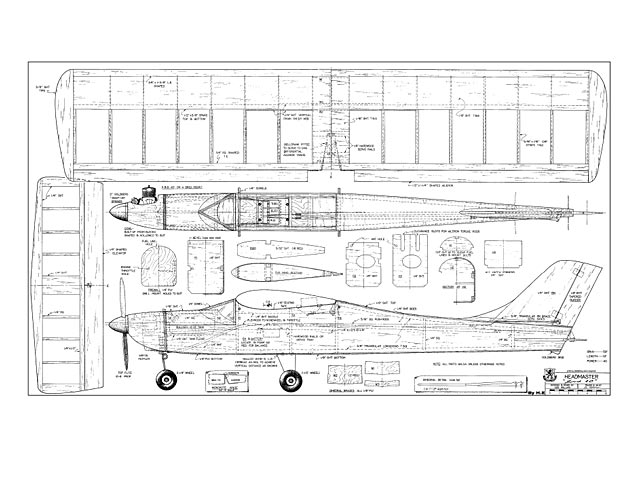 Quote: "If you have flown any R/C airplane successfully and want to step up to high performance and sleek appearance, the Headmaster Sport 40 is the one you have been looking for. By Ken Willard.

Fourteen years ago, after considerable needling from my friends to the effect that all my designs were for small engines like the .020, .049, and the .09 or .10, I decided to design a sport model for engines in the .15 to .29 range. So I did. Well, it wasn't really all that much of a design change, except for size. The Schoolboy (oz1030), the Schoolmaster (oz7534), and the Headmaster (oz1917) all looked similar: it was just that they were scaled up from basically the same drawing. And there's an excellent reason for that, commonly expressed as: You can't fool Mother Nature. The aerodynamic force set-up is so dependable, reliable, and forgiving of minor deviations in building that the airplane will fly even when badly out of alignment, which occurs more often than you think as beginners keep coming, into the sport of R/C. Yet, with the airplane built well and true in accordance with the plans, it is fully acrobatic in the hands of a resonably competent sport flier.

The Headmaster plans were published in RCM in September 1967 and were very popular.

In the past couple of years or so, the popularity of larger models has increased markedly. There are several reasons for that. They are easier to fly, and the larger engines, in the .40 to .60 range, have been refined to the point where they have excellent speed control from low idle to full power, even though the needle valve settings may not be precisely at the maximum performance point. And there are literally thousands of you sport fliers who have a good .40 or .60 that you'd Iike to put into a sport model and have fun. But you still don't want a pattern bomb: you'd like to have a model that looks like a Stand-Off Scale .job, can perform like a trainer if you want to teach a friend to fly, yet will do the whole acrobatic list of maneuvers when you're in the mood.

And that is the basic idea behind the. design of the Headmaster Sport 40. It's designed for you - the sport flier, And for those of you who want to really hot dog around, it will take a .60 up front and give you some really wild maneuvers. That is, of course, if you can do them.

You'll be happy to note that the construction of the Headmaster Sport 40 is almost totally conventional. Yet, with just a couple of small changes, you can get that Stand-Off Scale appearance that you want. In fact, if you are a sport flier and builder, you probably won't even have to read the rest of this article; just get a set of the plans and build it. Everything called out on the plans is available at your local hobby shop; and if you don't have a local hobby shop, you can order the material from one of RCM's advertisers. So let's start with the fuselage.

Fuselage: This is basically a simple slab-sider, made from 1/8 balsa sheet, But note that the longerons are 3/8 triangular stock. This allows you to put the box together, then carve the corners into a rounded shape to give the illusion of a modern molded fuselage. Look at the drawing of the cross section at former F-1 to see how that is done. You can take it from there, and get that rounded appearance all the way back to the tail..." 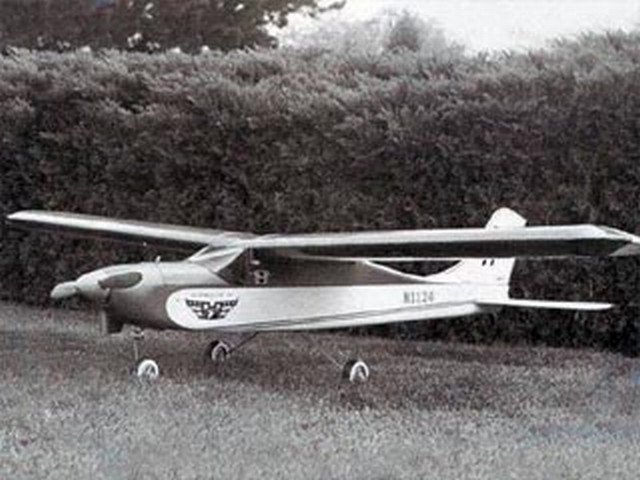