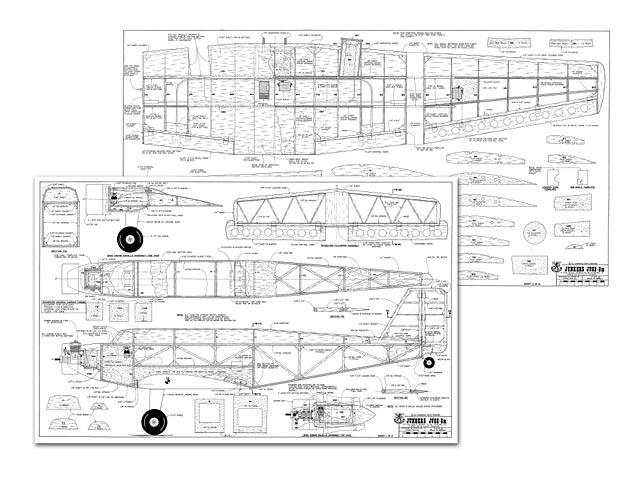 Quote: "Over the years the most widely produced transport aircraft in the world was the well-known DC-3. Not as commonly known is the fact that the German Junkers Ju52-3m holds down second place, with an estimated 4,835 of them being built in many different countries. They were used for everything from airliners to bombers, but most of the 4200 military ordered aircraft were transports.

Making its first flight in 1932, the Junkers takeoff and landing performance was superior to the DC-3, but it had a lower ceiling and top speed. It was such a good aircraft, however, that it was produced as late as 1952 as the Spanish CASA 352/3m. The very good short field performance and low-slow flight of this aircraft made it a very good battlefield transport.

The same things that made the Ju52-3m a good full size aircraft also make it an excellent choice for a multi-engine model. It is often overlooked, however, because of the difficulty of reproducing the corrugated skin for true scale, This model, however, is riot intended to be a true scale project but rather one to sport fly and perhaps enter in a fun scale meet where the lack of skin texture is of little value compared to the fine flying habits of this aircraft.

If you must have a reason for the smooth skin of this model consider this possible scenario. Early in 1941 the Luftwaffe high command saw a need to increase the speed and simplify construction of the Ju52-3m. Because they wanted to do this with a minimum of re-tooling and re-engineering it was decided not to change the basic airframe but only to improve minor aspects of the aircraft.

The significant change was to be the use of a smooth skin rather than the corrugated one, also the flying surfaces were enlarged somewhat, and the controls were incorporated into them instead of being externally mounted. This one-of-a-kind prototype was designated Ju52-3m(s). The (s) was for smooth, it was given the registration number EKIV for the testing division's (EK) first prototype (IV). While the prototype performed well it did not gain enough performance or ease construction enough to justify a change in production and the Ju52-3m(s) was never produced. It sounds good anyway!

This model aircraft features a few changes to its scale outline to enhance the flying qualities a bit. However, since it still looks like what it is supposed to be, it is a good choice for the AMA fun scale event as well as just sport flying and showing off your multi engine skills. As we learned in the early days of flying, the tri-motor concept is the safest of all the multi engine setups. Therefore, when I was choosing a plane that would be used mainly for sport flying I decided that this was the way to go for a multi.

Since the heart of any good multi is good reliable engines, I chose what I think is the best .20 size engine made for power and reliability, the K&B .20 Sportster. It also has the added benefit of being very quiet so that the great multi engine sound is not that unrealistic 2-cycle scream.

As with any good flying aircraft, weight must be kept as low as possible so I used the old 'stick' type construction as much as possible. This resulted in a three engine, eight servo, 84 in model that is just over 10 lbs ready to fly. So select your wood with an eye toward weight as well as strength according to where it is to be used.

With any worthwhile project the outcome depends a lot on the preparation. Study the plans and materials list before gathering your wood and choose wood according to its use. Some places will require harder balsa than others and, obviously, the wood in the tail must be chosen for weight as well as strength. Also, do not be tempted to substitute balsa for spruce; doing so will weaken the aircraft.

After you have chosen your wood, use the plans to make a kit of all the parts that must be cut out..." 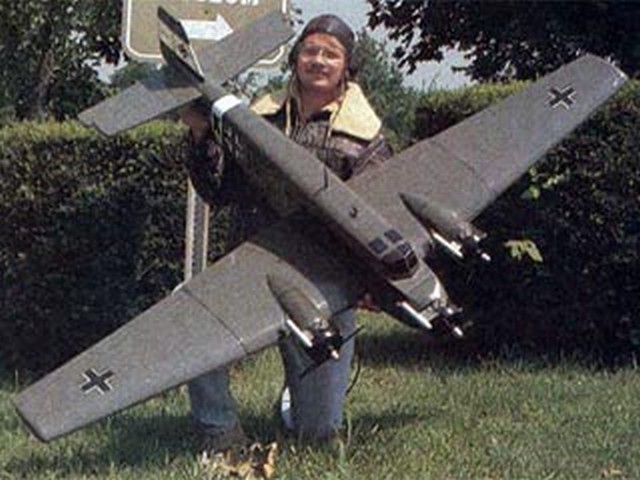