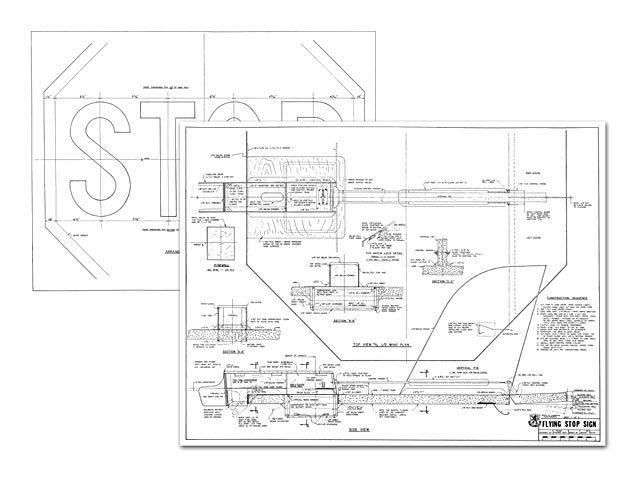 Quote: "If you want to boggle everyone's mind, build this .40 to .60 powered 'sorta scale' project. The original design comes from the 'Texas Highway Dept' and reference material is readily available in Texas.

Well, there goes seventy-six years of aerodynamics down the drain! - that's what Add Evans had to say after the first flight. Maybe he was right, but it does fly and there's that pudding that's supposed to prove something when you eat it. It also causes city police to pull you over to ask you where you are going with one of their stop signs in the back of your car.

The whole thing started with the April 1976 issue of RCM and the 'UFO's? Not Really' article. This showed Francis Plessier's Flying Saucer. but gave precious little nuts and bolts detail. It was a great idea, but what was so unusual about a flying disc other than the airfoil? I have a controline flying saucer made from plans in the April 1953 issue of Air Trails, called the Sassy Saucer (oz11585). It still flies fine. I looked around for a more suitable logo for a round airplane. Finally I settled on the logo of the company I work for. Gulf Oil. So I built a Flying Gulf Sign. Before you say, What a Brownie! let me say that Gulf didn't really give a damn and has not paid me one cent for that. They do not believe in petty advertising. Aside from a small article in one of the company's magazines and asking me to fly at a retirees picnic, their attitude has been one of studied indifference.

The Sign flew well enough and is still intact after about 150 flights. but I decided to retire it and build something else because of public attitudes. Let's face it - we're all hams. Thus began the search for another more-or-less round subject to model. After discarding pizzas, Oreo Cookies, LP records and Farrah, I set on the lowly stop sign. Maybe now people won't think that it is a commercial for the Texas Highway Dept!

After building it I came upon another problem when I tried to get a pattern for the STOP letters. There ain't no 'standard' stop sign! The only thing that seems to be the same from one sign to the next is the shape, color and how to spell 'STOP.' I measured eight different stop signs within a half-mile of my house and found that the ratio of letter height and width, not to mention shape, were roughly the same on only two of them. They all looked the same from the road. but when I got up close with a ruler they looked like they had been painted by a Viet Cong after a six-day drunk, using a rice straw tooth brush. Talk about Stand Way Off Scale! After averaging all of these. I came up with the markings shown on Sheet No. 2 of the plans. In some areas of the country, octagonal lettering is used, so check your friendly local stop sign for further details. You
might try Xeroxing one.

Construction. Building this thing is no big deal as long as you don't try to get too fussy about details, such as wrinkles, finish, servo centering and other tripe like that. The damn thing will fly, no matter what you do to stop it! More about this later. The initial construction sequence is shown on the plans only because I wasted a lot of time trying to figure out what to do first and then what next.

If you're lucky, you can find 1 in thick styrofoam sheets in 4 x 8 foot sizes at a local building supply store. It is used for insulation. When I started the Gulf Sign all the local stores were out and remained that way for months. Energy crisis, they told me..." 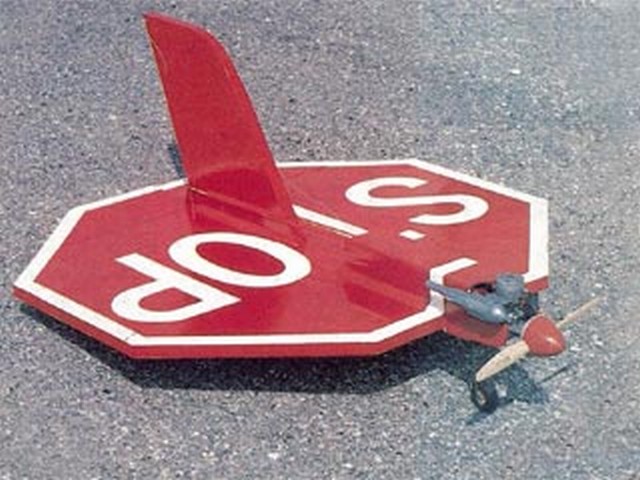