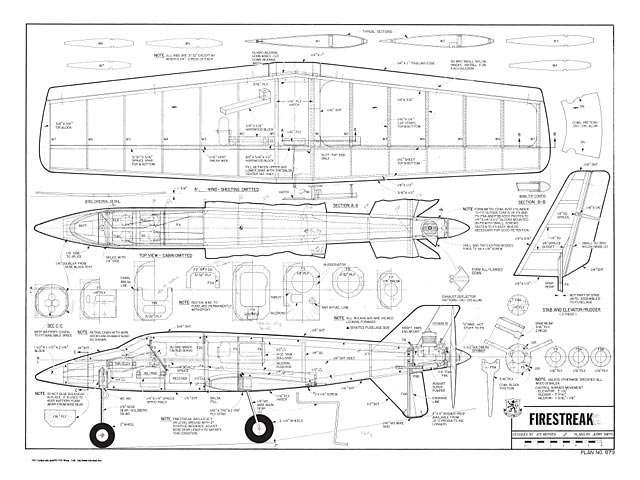 Quote: "A look-alike of the full size Lear Fan Supership, this model is a real performer. Powered by a .15, when airborne - hold onto your hat. Firestreak by Joe Mergen.

The writer has been intrigued by the configuration of this design since the Douglas X1342 Mixmaster Bomber prototype circa 1946. The advent of the new Lear Fan 2100 brought it all together again and the temptation to build it as an R/C model would not go away.

This type or airplane actually predates the Douglas. Paulhan-Tatin built and flew a similar configuation with a 50 hp Gnome engine in 1911. The only data which can be found is that it 'outperformed all others' in its power class doing 80 mph.

The writer had actual experience with the Mixmaster, having designed and built the propellers while Chief Design Engineer at the old Curtiss Wright Propeller Division. The Douglas outflew everything around also, and was abandoned only because of gearbox troubles and the advent of the jet engine. The lack of public and government interest in anything military in the demobilization days of 1946 may have had something to do with its demise also.

Anyway, here it is again in the Lear Fan 2100. Somebody re-invents this airplane every 35 years. Some valid claims can be made for this type Airplane and are as follows:

1. Symmetrical thrust during single engine operation.
2. Drag reduction due to lack of slipstream over the fuselage, empennage and some of the wing and fuselage boundary layer clean up.
3. Improved stability due to propeller normal force behind the CG.
4. Clean fuselage and surface shapes with minimum interference drag points.
5. Low cabin noise.
6. Lack of structure through the cabin such as the wing spar etc.
7. Good visibility.
8. Good appearance.
9. Efficient structure.

So much for the big one. The model has almost everything going for it that the big one does, except people in the cabin to enjoy the quiet ride and Reynolds number. Even the Reynolds number isn't too bad being 430,000 at 70 mph.

Firestreak is not a scale model of the Lear, but is close enough to suggest it is the same airplane. Making it to scale was abandoned when it was discovered that a scale wing would be so small that the wing loading would be undesirably high for a 40in wingspan model. A larger model with a .40 or .60 CID or even larger engine might be built to Stand-Off Scale with great success. Maybe some day - but back to the present.

With the surface travels shown, the handling is excellent. Stability is outstanding. It has been flown 'hands-off' many times. The airplane is very nimble and and maneouverable, but has no unpleasant handling qualities or surprises. The speed with this engine is impressive. 'Firestreak' is the right name. It has been clocked at 82mph..."

Article pages, thanks to AugustaWest. 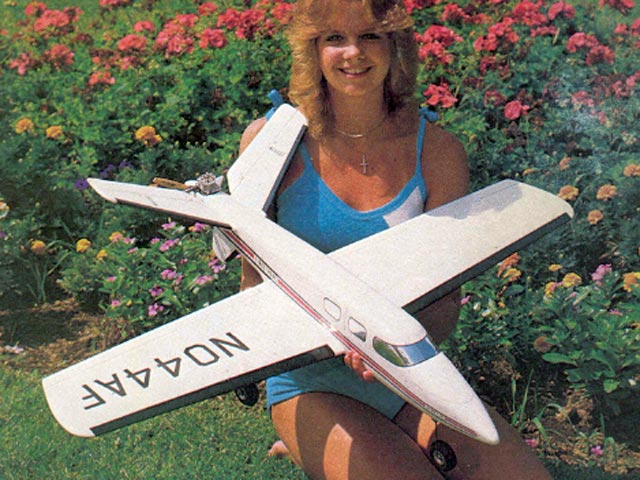