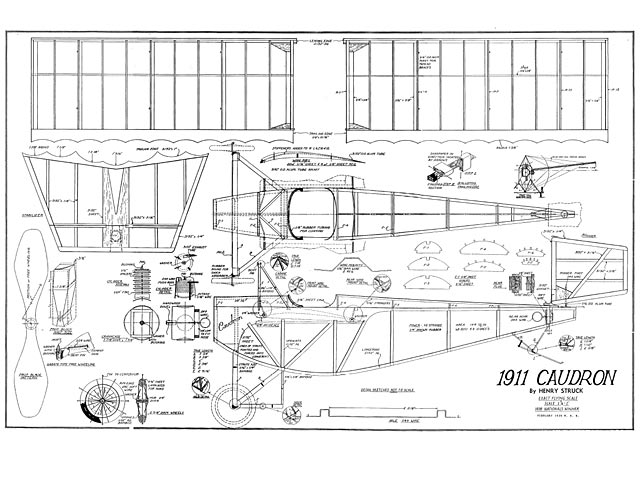 Quote: "The Flying Scale Nationals Winner. How You Can Build the Super-Detail Model of the Caudron Monoplane That Outflew All Other Contenders. By Henry Struck.

Under the rules governing the Flying Scale Event at the National Meet, a model to be eligible had to be: 'an exact replica of a man-carrying machine every part being proportional to the corresponding part of the larger machine. No part of the model may be made larger in proportion to improve performance. The propellers must conform to the original, but may be altered in blade width and pitch.'

Now add to this a weight rule of three ounces per hundred square inches of wing area, ROG launching, points for workmanship and detail and you have the ingredients of a really tough but interesting contest.

With the great majority of flying scale model plans or kits doctored in just such fashion as would make them immediately ineligible, the only solution seemed to be to construct a full size ship exactly like a contest model and make a replica of it. This happy thought appearing somewhat impractical, we undertook an intensive hunt for a ready-made airplane with the desired characteristics.

It was not until we had gone back as far as the 1911 types that a fully satisfactory design was unearthed. First of all, the large prop whose diameter was 1/3 the wing span, the comparatively small wing area requiring a low total weight and the long rubber line possible, promised performance. Second, the bellied fuselage lowered the center of lateral area to increase spiral stability; while the combination of long tail moment arm and ample tail surface assured longitudinal stability. Last but not least, the abundance of detail such as spoke wheels, wire rigging, dummy motor, etc, made the ship one to catch the eye.

This was the Caudron! A tiny ship whose monoplane wing spread a scant twenty-four feet. Powered by a four-cylinder air-cooled motor, a speed in the neighborhood of 75 mph was possible. The pilot controlled his machine by a regulation stick and rudder bar, with the then-popular wing-warping system used for lateral control instead of ailerons.

Now that at last a decision had been reached, there was hardly time enough to construct a good model. Still it was pos-sible because of the simplicity of the plane itself, to devote proper attention to neatness and strength, and to add the details by burning the midnight oil before leaving for the Nationals. Well, any way we only had the brace wires and motor details to put on at Detroit the night before the contest.

With John L Ogilvie, fellow representative of the Queens Aero Model Association, who had also eked out a Caudron, we took our model to the hangar where the preliminary judging was to take place. When the results were tabulated, John had forty-two and we had forty-four out of a possible fifty - just about the best scores made. The increasing force of the wind that swept the field curtailed test flying, lending added importance to our scores. But the Caudrons gave noble account of themselves, though flown untried under capacity winds and hampered by the difficult weather conditions, John L Ogilvie placed second in the Senior class and we won first place and the beautiful William O'Niel Trophy in the Open Class.

With this brief history we now present the plans to build this prize-winning model.

Fuselage: Join plates I and II to obtain a full size side view of the fuselage. Bend the longerons from 5/32 square hard balsa, soaking them in hot water to avoid breakage, and pin them in position on the plans. The top longerons are cut from 5/32 soft sheet balsa to simplify strengthening the body at vital points and also pinned to the drawings.

Cement the uprights of 5/32 square soft balsa in place. Both sides should be built at the same time to assure their being alike. Remove the sides when dry and connect them with formers F-3 and F-4, as well as the corresponding bottom cross-pieces. Pull the rear of the fuselage together and fit the necessary formers and cross-pieces.

The nose is joined in similar fashion, thoroughly moistening only the outside of the frame to facilitate bending the heavy structure. Note that the first three cross-pieces are doubled to reinforce the nose and the landing gear struts. Check the trueness of the fuselage as the alignment of the finished model is dependent on it..."

Update 01/07/2016: Added alternative scan of the original 4 pages with drawings as published in 1939 MAN, thanks to Rottensox. 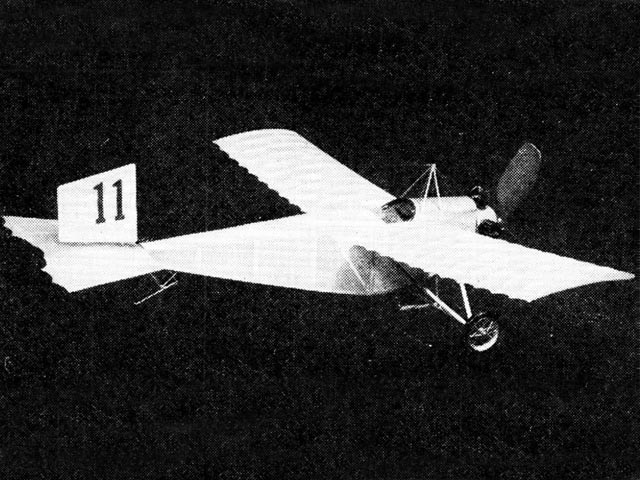