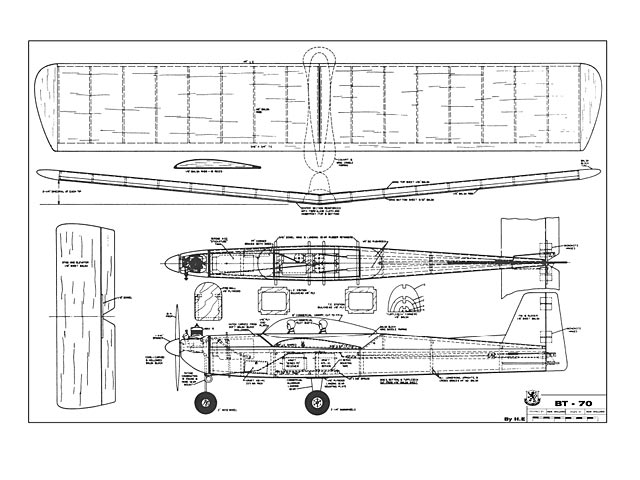 BT-70. Radio control trainer model, for .15 power. This is a low resolution plan.

Quote: "Several of the respondents were very emphatic: in their desire that the model not be another 'look-a-like' if it could be avoided. And that did make the assignment a bit tougher. There are several kits on the market which just about fill the bill the De Bolt Champion (oz413), the Esquire (oz384) and Top Flite's Headmaster (oz7295), for example and they're stable, high wing designs. So, if you didn't want it to look like them, you have to disguise the high wing setup. Now, the way to do that, I figured, would be to make the model a mid-wing, then drop the stab down in the fuselage a bit so it's below the wake of the wing, and then you still have a basic high wing layout but it doesn't look like it.

It's pretty hard to beat a flat bottom wing when it comes to longitudinal stability. And you can't beat it for simplicity of construction at least if you have a flat working surface to build it on. No matter how good the design is, if the wing and stab aren't free of warps, you're gonna get into trouble on that first flight.

For the beginner, tricycle landing gear is the only way to go. If you carefully line up the wheels so the model rolls in a straight line, then takeoffs can be made unassisted. The model should sit at rest with the nose very slightly down. This assures that the model will have good flying speed at lift off, and also will help lo prevent ballooning back into the air on landing. The nosewheel doesn't have to be steerable, but it isn't too hard to install that way, and it is more fun.

All these things were taken into consideration in designing the BT-70. In addition, the simplest possible construction - all sheet balsa, plus carved balsa blocks for the engine cowl, hatch, and the wing fairing for the cockpit canopy is used. The only tricky part in the entire building process might be considered the fitting of the sheet balsa over the turtledeck. But I considered that an essential part of the design in order to avoid the 'look-a-like' slabsider..." 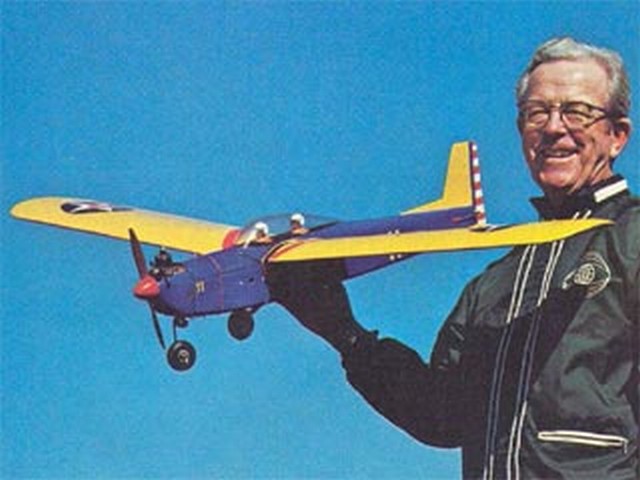