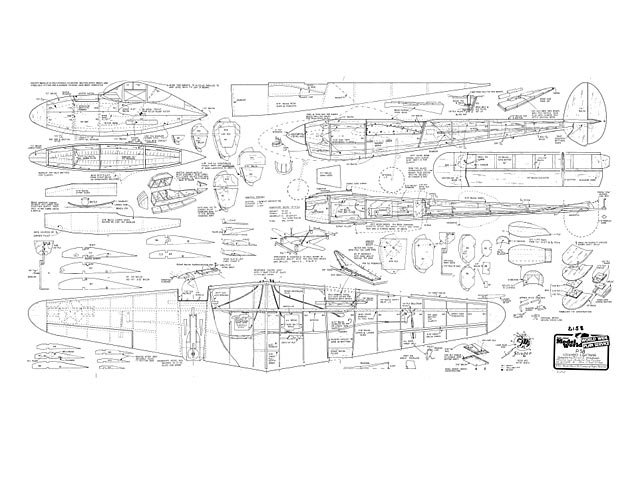 The P-38 must have inspired more daydreams and fired more aeromodelling imaginations than almost any other twin-engined aeroplane. The ship has been on my hit list for 30 years, and you've no idea how much pleasure it gives me to present here in RCM a really practical small scale model of the aptly named Lightning.

There are two features of the real P-38 which indicate its potential as a good R/C sport scale model. First, it is a well-known fact that many P-38s returned home from missions with one engine stopped, sometimes having flown hundreds of miles in this condition. Some pilots even managed to outfly the opposition whilst only on one engine. Therefore, the Lightning's single engined behaviour must have been pretty good.

Secondly, there are many photos shown in the various books written about the Lightning which depict successfully belly-landed machines, surely an indication of the design's stability in a wheels-up landing. This quality enables us to do away with the landing gear to save weight and drag, and to go for a hand launched model.

Of course, what really makes the ship a must for R/C enthusiasts is the large variety of brilliant colour schemes available to adorn its wickedly irresistible and unconventional configuration. There is a whole raft of references available on the Lightning, and I've listed the ones I've seen at the end of this article.

I must confess that my model had a rather turbulent start to its career, and I hand launched it into the ground three times before applying a common sense modification in the form of little finger grips on the cockpit nacelle. These accidents showed that the model was repairable and, at the same time, highlighted a potentially hazardous flight characteristic, caused by the quite generous dihedral angle on the Lightning; I'll explain this fully later. Two of the prangs cracked a boom. The third broke the wing and both booms. This model hates cartwheels!

To aid those who are not confident with hand launches, I've shown a suggested fixed landing gear on the plan.

It is worth commenting here that I never photograph a model intended for publication in its finished state until after it's been properly test flown and had all the bugs ironed out. I'm not interested in pictures of unsuccessful models. That way, you get what you see, and I get the material for the flying section of my plan features. What you see here is a thrice repaired P-38 which has had over 50 flights, and which won a scale competition on its first public outing, beating off six or eight other models, including a pair of well-built large scale ships. The lessons I've learned from this P-38 will be passed on to you in the flying section. So, let's proceed with the construction.

Wing: The sequence of wing assembly is illustrated on the plan, and is a little unusual in that the lower spar is added after the ribs have been glued to the lower skin. Make up the lower and upper wing skins. Do not cut out the LE and TE recesses for the booms yet. Mark the rib positions and aileron hinge line on the lower skins. Now add the 1/8 sheet false LE, all the ribs, and the lower spar in the order shown on the plans. The spar doublers are glued to the spars before insertion into the ribs. Next add the aileron hinge spar and the aileron LE, and the LE and TE reinforcement between W4 and W5. Also add the skin doublers between W1 and W2, and between W4 and W5, using white glue..."

I'm not sure where my fascination for twin boom aircraft really stems from. Perhaps it was those teenage days when I would be distracted from my control line exploits by the early jets, including the Vampire and Venom, ripping across the Lincolnshire skies. Anyway, at a club meeting some photos of a Duxford air show were being passed around which included a picture of a P38 Lockheed Lightning. Always fancied building one of those, I said idly, to which a clubmate responded: I think I've got a plan for one somewhere. From such a chance remark this project was born.

The Plan: The plan turned out to be an RCMW 'freebie' published in two parts in 1988, by Gordon Whitehead. The size was ideal 52 in wingspan, and my enthusiasm grew as I read the article and admired the many photographs. The designer claimed good flying characteristics but reported some problems getting away from hand launches. Since the model was powered by a pair of OS 15's this could hardly have been through shortage of power (I was planning to fly on one 7 cell battery!) so there was only one other explanation. Sure enough, the all up weight was a hefty 72 oz - and I had to find room for another 14 oz of battery.

The Re-plan: Comparisons with other 7-cell electric models indicated that 3 lbs would be a good target, but could it be done? I had to lose 1 lb 8oz and accommodate the weight of the flight pack! Examination of the wings showed little scope for weight saving. They are all built up, sheeted in 1/16 balsa. I reduced the rib thickness, changed the spar doublers from spruce to balsa and left out various reinforcing pieces on the grounds that the wing was going to carry a lighter load.

As designed, the model breaks down into a wing, two booms and a tailplane, all of which bolt together. By opting for a one piece model a whole load of ply lates and other stiffening pieces can be dispensed with. However, there is no getting away from the fact that this aeroplane has to carry around three fuselages instead of one and it was here that the lightness had to be added by the bucketfull.

The Re-modelling: The booms and the centre pod are elliptical in cross-section and this is achieved in the original design by the use of ply formers and thick balsa sheets, mainly 1/2 in, that are subsequently sanded to shape. This approach was abandoned and instead 1/16 balsa was rolled round the tapered rear sections of the booms and 3/3 [?] planking used where there were compound curves. Liteply was used for most of the formers, fretted out to become little more than hoops.

Next up for the crash diet was the tail section. First to go were the rudders, saving two sets of hinges, a servo and the rather complicated linkages. The tailplane structure could also be revised to allow the use of thinner skins and the fins and elevator would be built up rather than solid..." 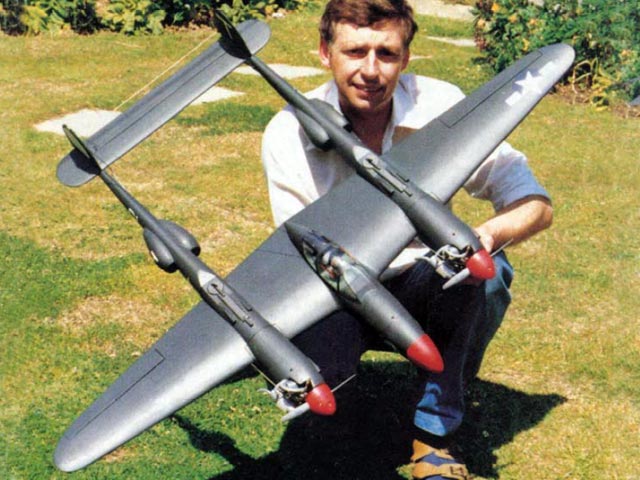 Just bought a pair of OS 10s off EBay with the aim of building one of Gordon's Lightnings (and one of his Tomahawks!). Having flown the one pictured many times (and photographed it - the picture of it flying is one of mine!) I can vouch for Gordon's comments... it's an easy to fly bundle of fun that makes you a P-38 pilot for real! Great fun!
Richard Spreadbury - 09/08/2019
Add a comment