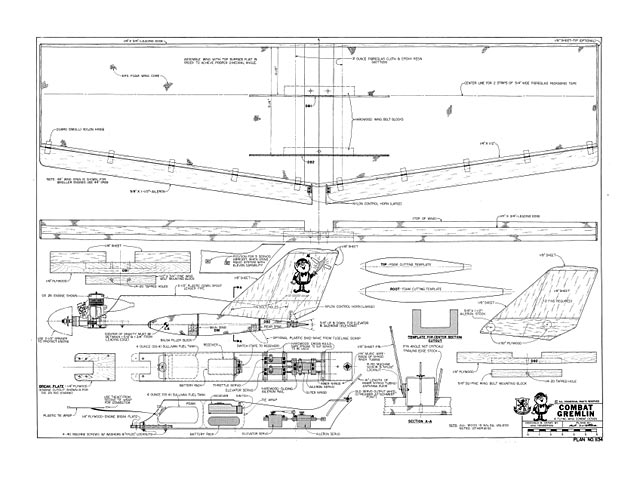 The Concept. For many years Control Line Combat has been recognized as a tremendously exciting form of contest. Combat addresses a primeval and very human appetite for one-on-one dueling. The Combat Gremlin has given R/C Combat a major shot of viability and has addressed the two major stumbling blocks of expense and building time.

It began with the thought that R/C flying is theoretically a non-contact sport. Therefore, how about designing a plane that is regularly expected to make some form of pretty hard contact? Several trainers were considered, seeing as how the toughness need has already been achieved with a couple of notables. The problem with this approach was that either they cost a lot of money or, to put it politely, they lacked acrobatic performance. Even a tough trainer has too many parts compared to a U-control set-up. What I was looking for was an acrobatic plane that would meet the rigors of combat. A plane that could almost always be field repaired. What I wanted was something that was as good as the U-Control crowd had!

Many hours were spent wrestling with the design concepts, but I consistently tripped over my accumulated model building experience. Boy! was I conditioned to build and design in a very narrow corridor. In the end I wrote a sign and hung it up above my workbench. It said. "If you build it, they will break it!" A play on words from the movie 'Field of Dreams. This freed up my thinking patterns and the Combat Gremlin was conceived.

The Design. The Combat Gremlin was designed from 'Impact' backwards. It had to bend rather than break. It had to allow every part to be field replaceable. The end result was a plane that was light and forgiving. It employed a self-contained fuselage that was attached to a semi-disposable wing. A flying wing was chosen because it has fewer bits to break.

Figure 1 shows the basic layout. The fuselage contained all the delicate parts and can be removed by only unscrewing three wing bolts and the disconnection of two clevises. It would prove to be very quick to make. With base materials such as plastic down-pipe and 2 inch insulation foam, it would also prove to be very inexpensive to make. 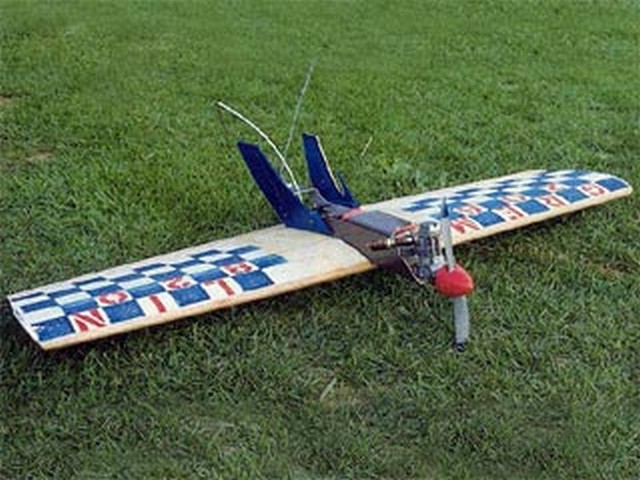 Had quite a few of these over the years powered mostly by .45 engines. I never tire of this model - it can be flown mild or wild and even have undercarriages fitted if desired. Flies like it is on rails and extremely fun to chase others around the sky with streamers attached. Forget the .25 engines and fit a .45 and have some real fun.
Peter - 06/10/2018
Add a comment