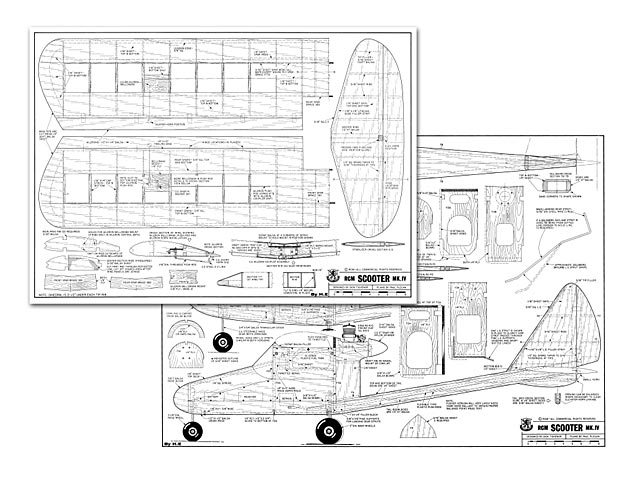 Quote: "This change of pace sport pusher will make you the main attraction at your club field. If you are a real sport, try the speedy twin version.

Four and a half years ago we ran a construction article for a .049 pusher that we called the RCM Scooter (oz5978). Our staff enjoyed flying it so much that our Fearless Leader immediately insisted on having a .40 powered version. We have run out of excuses and after all that lime, here it is. We call this one the RCM Scooter MK IV.

With somewhere between 150 to 200 flights on the MK.IV, we have found it to be as stable and forgiving as any trainer we have ever flown. For criticism, we have been unable to keep it inverted more than a few seconds as it wants to roll out and fly upright. As for spins, a pattern judge would probably award it 3 points at best. However, if you are looking for a Sunday flying sport ship with a distinct personality, you and your flying buddies should love the MKIV.

While the pusher was being flight tested, tortured, and otherwise abused, our fiendish minds wondered how a push-pull twin version would work (we did it okay with the .049 Version). Oh boy, does it work! With two .40's screaming it moves out like a scared rabbit. Take-off and climb-out are hasty and it is considerably more manueverable at full power. Throttled back it is a pussy cat like the pusher. If either engine quits you have no problem, in fact, one of the engines will almost always run out of fuel before the other which gives you time to bring it around for a no-panic power landing. The significant difference between the structure of the two versions is limited to the forward fuselage and both are presented on the plans.

Part of the delay in presenting this article was to prove the practicality of the design, An early point of concern was the fuel system arrangement. The fuel tank is mounted low relative to the carburetor and there. is an excessive length of fuel line. There has been absolutely no problem with starting, top end, or idle. Incidentally, we have never used an electric starter on this engine in the pusher; all starts were hand cranks. The engine was new, out of the box, and mounted in the airplane with no bench run-in. We attribute this performance to the superb capability of the K & B front rotor .40, model 8011.

As for construction instructions, the photo sequences are self-explanatory so only the key steps will be mentioned. We suggest that all the parts be cut out before starting-assembly of the various components such as fuselage, tail surfaces, and wing. In other words, make yourself a kit, it seems to assemble faster. For adhesives, we used cyanoacrylates, aliphatic resin, butyrate cement, and epoxy, each in applications best suited for the strength required with the least amount of weight.

The fuselage starts with assembling the bottom cabin beams to the formers and then building the rest of the structure from there..."

Update 01/04/2015: Replaced this plan with a clearer copy, thanks to Balsaworkbench and theshadow.

Update 07/06/2016: missing piece of article added, thanks to spitfireflyby. 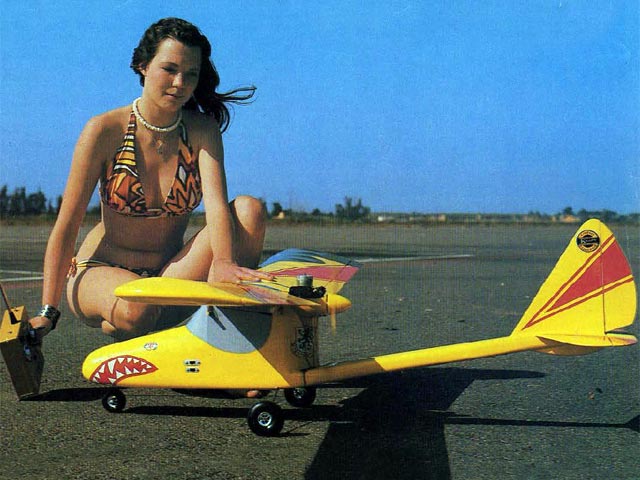 Here are several pictures of the RCM Scooter, Mk IV [more pics 003-005]. I built these back in the '90s. The blue one had a K&B .40 two stroke. The red one had a Graupner Speed 700 brushed motor running on 14 cells. Both flew extremely well. Outstanding plane for a leisurely afternoon of no stress flying. I liked the design so well, that I even made a mold in order to make epoxy/fiberglass fuselages. Thank you very much for your site.
BobSealy_Tennessee - 23/02/2018
Add a comment