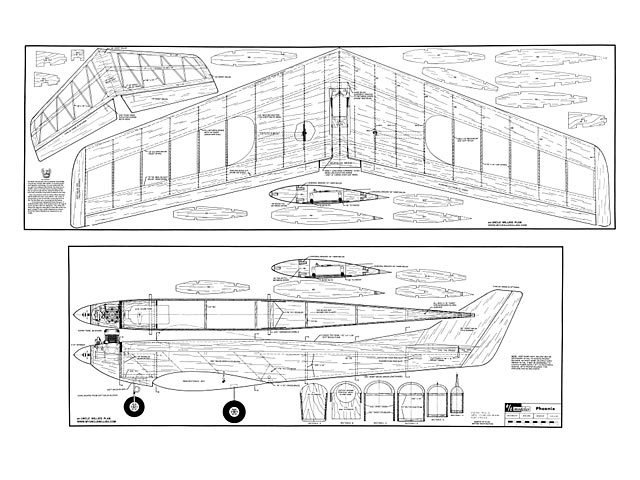 Note this is the first of what became a series of pattern planes. Also see Phoenix 5 (oz7774) for the highly popular fifth version, published in July 1971 AAM.

Quote: "FELLOW club member Ray Nugen and I have been experimenting with swept designs for over two years. In all, we have constructed 8 ships with wing sweep ranging from 5 degrees to 23 degrees per panel. We have flown the designs with both reed and proportional equipment. The designs (Ray's and mine) have been basically similar in proportions but different in size. My ships (named Phoenix) have had wing areas from 700-720 square inches. Ray's ships (named Expinkamental) are larger, having about 790 square inches. Both airfoils are originals and quite similar except that I have been using about 17% thickness and Ray about 13%. The airfoil used on the Phoenix wing is progressive to a thicker (percentage) section at the tip in order to delay tip stall and soften the stall characteristic of the wing.

One ship used in the program, other than the original designs, was a modified Taurus (oz612) in which the wing was swept about 5 degrees per panel. No appreciable change in flight characteristics could be noted with this design. However, spins were difficult with this airplane and it showed absolutely no inclination to snap roll.

We found very early that care must be used in locating equipment in the airplanes since the center of lift is quite far aft on the fuselage. Conventional placement would create a nose heavy condition. Batteries, for example, should be mounted aft of the servo installation, and servos should be placed as far aft in the wing bay as possible. Care must be exercised with regard to weight in the nose since these airplanes tend to be nose heavy. You will notice in the Phoenix design that the nose moment appears to be quite short. This has been purposely done in order to alleviate nose heaviness. The effective nose moment is not short, however, since this is measured from the prop to the center of lift.

We have found these airplanes a pleasure to fly. Not only groovy, stable in rough air, and spinning and snapping demons, but quite pretty to watch. Inverted flying is a pure pleasure and is every bit as easy as upright. Care must be exercised to keep the aircraft above stall speed (except when commanded) since the stall is abrupt. I definitely would not recommend these designs to the multi beginner. I don't mean to imply that the airplanes are vicious, since they most definitely are not. They will tolerate a reasonable amount of horsing around on the approach at slow speed, but they are a little less tolerant to sloppy flying under these conditions. One must only remember the most im-portant axiom of full scale flying - maintenance of airspeed is the prime requisite for safe flying.

The trim is 'peaked' when the CG is as far aft as tolerable for safe flying since they will snap and spin most easily under these conditions. This is a good trim premise for any design, for that matter..." 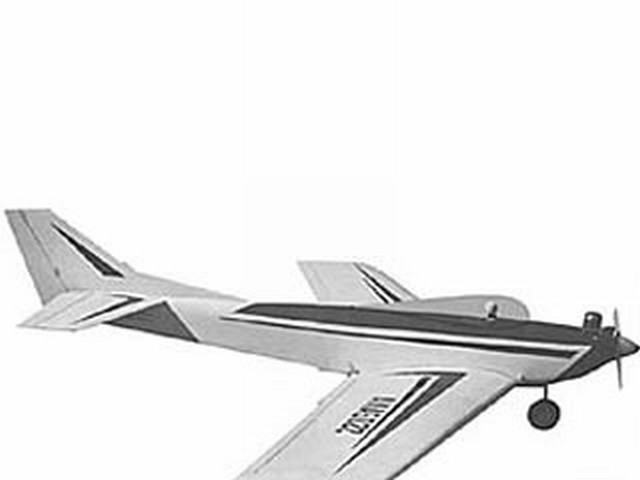