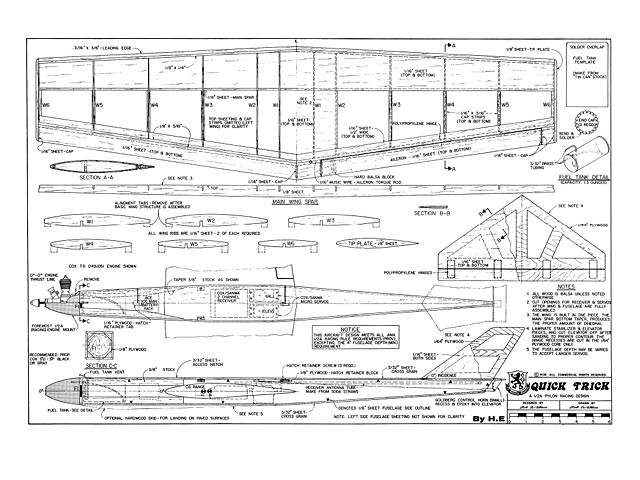 Quote: "Radio control modelers who favor painted finishes on their aircraft and, consequently, find themselves faced with a drying time void, will occasionally venture forth from their workshops. While on these rare sabbaticals, some modelers will, in order to pass the time, engage in a card game called Bridge. For these modelers the term 'Quick Trick' needs no explanation.

However, for those modelers who are devotees of the film cover finishing technique and, thereby, never have reason to emerge front their workshops except for their usual vocations, refreshment, sleep, or to fly their creations, we would explain that in Bridge the term quick trick refers to a virtual sure winner. An ace or king/queen combination in any suit.

1/2A pylon racing, experiencing a rapid growth in the New England States, now features a full season of well run sanctioned contests which are centered in the eastern Massachusetts area. The New England area 1/2A pylon racing rules are the AMA provisional rules with one exception: that being the minimum fuselage cross section requirement, which was eliminated. It was the consensus of most flyers that this rule, as worded, was ambiguous.

1/2A pylon racing is an inexpensive, fun to fly event that can be held at virtually any open field. Since hand launching is used. the field doesn't even have to be closely mowed.

A highly competitive 1/2A racing aircraft, including radio system and engine, can be built for under 100 dollars! 1/2A pylon racing is without any doubt the least expensive form of racing within the world of R/C.

The Quick Trick is designed for use with the Cox/Sanwa #8020 two channel radio system - although any other system with relatively small servos may be used. The Cox/Sanwa #8020 system was our choice because it is one of the least expensive two channel digital proportional radio system available. The servos are very compact, although the receiver is somewhat large for a two channel system. We substituted an Ace 100 mah ni-cd battery pack for the standard Cox/Sanwa airborne dry battery pack. Don't let the low price of this radio system fool you. It is a remarkably fine performing system, surprisingly so when one considers its low purchase price.

If you presently own an older radio system with larger servos and battery pack, the purchase of two of the smaller servos that are now offered by many manufacturers (in either kit or assembled form) and a smaller ni-cd battery pack (100 or 225 mah) would be well worth your consideration, since the use of the larger components would necessitate increasing the depth and width of the fuselage. We have not had any problems in flying 5 heats using a 100 mah battery pack, without recharging. Tests with a Flite Life indicate that approximately 1/2 of the battery packs's capacity is used in flying 5 heats, providing that the airborne system is turned off promptly after each heat.

If you are an R/C'er with an interest in racing, but have in the past shied away from it due to the high cost, then 1/2A racing is made to order!

The Quick Trick is a very clean aircraft that is designed strictly for racing. it flies extremely steady and groovy and it is fast. There are no "squirrely" tendencies. The second "Quick Trick" that was built. and the subject of this article. utilized two EMS Bantam Midget servos.

Construction. Wing: The wing is constructed by the use of alignment tabs which are attached to each wing rib. Start by cutting out the twelve wing ribs from 1/16 sheet balsa and the notched 1/8in sheet wing spar. Position the wing ribs onto the spar and pin in place over the wing plan on a flat building board..." 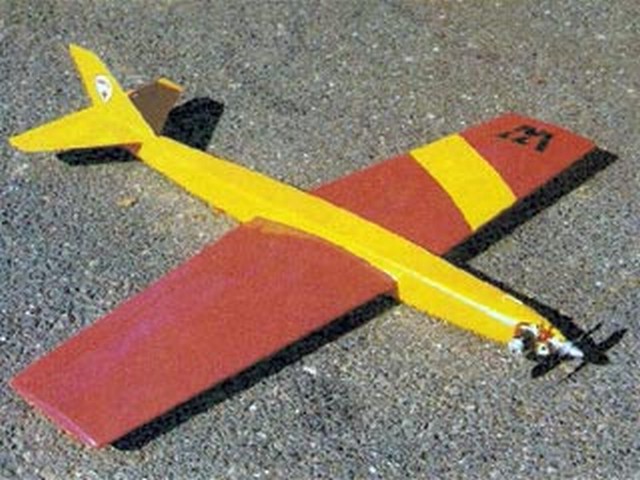