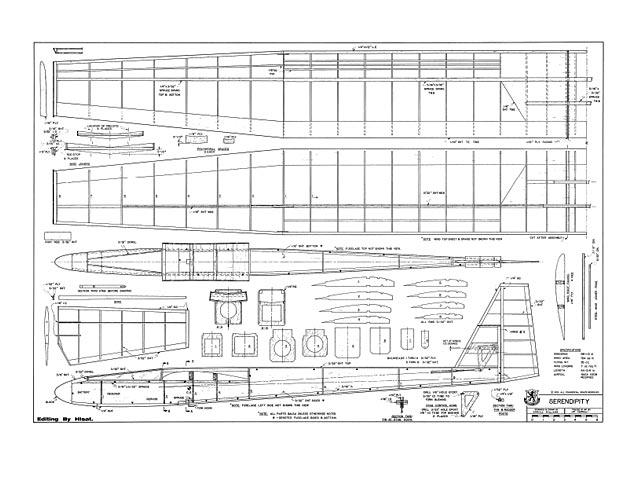 Quote: "Webster defines serendipity as 'The faculty for finding agreeable things not sought for". Granted, an inanimate object of itself cannot find things. However, under the guidance of the pilot, many agreeable things nor necessarily sought for or expected may occur with this sailplane. Therefore, I have christened it Serendipity.

Following many enjoyable flights with Happy Face, my first design effort, it was only natural to want to improve on that design. Thoughts and ideas for Serendipity evolved as I observed flight characteristics of Happy Face and other sailplanes. With the announcement of the latest RCM design contest, it was time to put those ideas on paper, build and test fly a prototype.

Serendipity, like Happy Face, is designed for standard class competition. Certain design features of Happy Face have been retained, and new ones incorporated; the end result being where it counts, in improved performance. The wingspan has been increased to 98-1/2 in while retaining the 8 in chord and the modified NACA 4309 airfoil. The flight characteristics of this airfoil section have proved to be excellent.

Essentially the same moments have been retained but, due to the increased wing area, a slight increase in horizontal stab area is required. The fine positive pitch control response of the flying tail of Happy Face dictated no design change here. However, it will be noted that the control horn is internal to reduce drag.

Turn response has been improved by increasing rudder area and decreasing wing weight to decrease roll inertia. Greater airflow separation between the wing and horizontal stab is provided by the shoulder mounted wing. Wing turbulators, tiplets and plug-in attachment are all features which reduce drag.

Construction techniques are straightforward and should present no problem for the modeler ready to venture forth on his/her first scratch-built model. One unique construction technique is the method of assuring a perfect wing joiner rod wing-to-fuselage alignment. The wing joiner tubes are built into the wing during construction. The wing center section is then cut from the wing and incorporated into the fuselage.

Conventional materials are used in construction, balsa, spruce, plywood, epoxy, aliphatic glue, MonoKote and the normal hardware. Select materials carefully, build light and you will be rewarded with an excellent flying sailplane..."

Update 06/04/2015: Replaced this plan with a clearer version, thanks to theshadow. 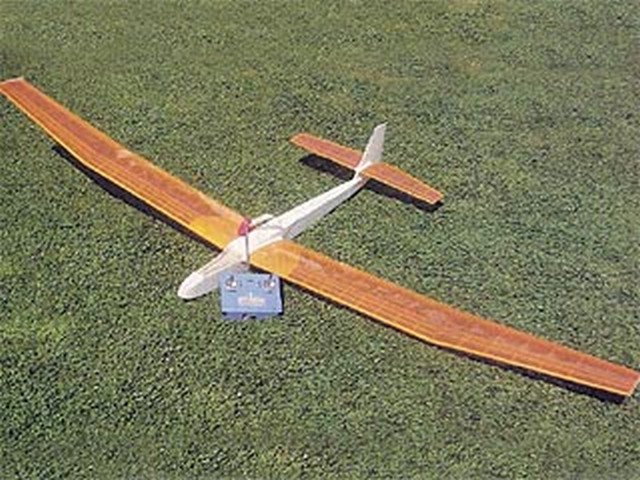