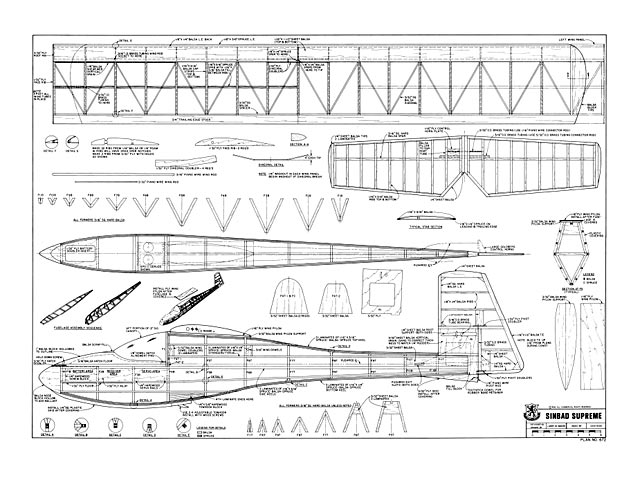 Quote: "Model aircraft are becoming more expensive to build with each passing season. This is mainly due to sky-rocketing prices of construction materials. Being a rather active modeler, but not a particularly rich one, I felt that it was about time to reduce the cost of model building. By using spruce and balsa laminations and incorporating the no-cost 'foam wing rib', the total cost of the sailplane presented here was held to less than $30.00. This price includes the MonoKote, canopy, glue, towhook and other associated hardware (except radio).

The Sinbad Supreme is an outgrowth of the old Super Sinbad (oz6980) sailplane, originally produced by Berkely, but presently available from Sig Manufacturing Company. The wing, fuselage, rudder, and stabilizer have been completely redesigned to be more compatible with today's Standard Class sailplane. The flat bottom airfoil was taken from the Windfree (oz1637) sailplane because of its good, yet forgiving, characteristics and because it simplifies overall construction.

There have been a total of three prototypes built. Each prototype incorporated various design features which I felt were important to a versatile sport sailplane.

The seven major design criteria for the Sinbad Supreme consisted of the following:

The projected weight of the finished model was established to be between 34 and 37 ounces. This would allow the wing loading to be between 7.2 oz./ft.2 and 8 oz./ft.2. The three prototypes all weighed less than 35 ounces. All of the aircraft flew right off the board with no undesirable flying characteristics.

The major reasons for choosing the construction materials and techniques employed in the model were cost, strength, and weight. It is quite surprising how strong a laminated keel and stringer fuselage can be. I have landed many times nose first with each of the prototype models, and no damage was ever incurred. Also, laminated keels and stringers provide very nice curves..." 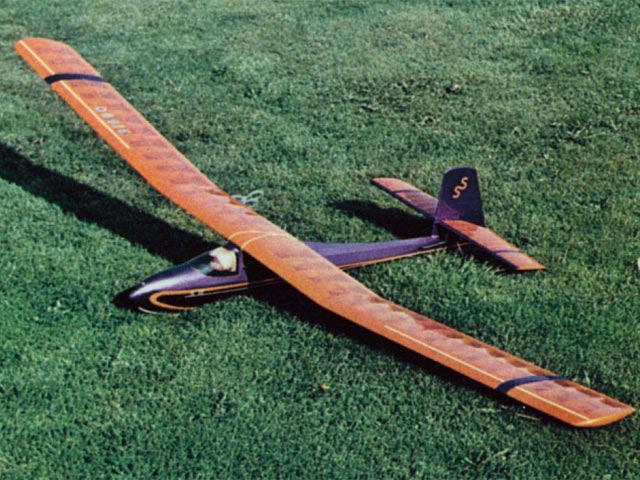 This is not a full-size plan. Scan of magazine plan page only. Not useful for building from.
rhewert - 09/09/2014
Good point. Fixed the scaling now. Thanks
SteveWMD - 09/09/2014
Downloading to my computer and then opening with Adobe Acrobat allows me to print out whatever scale I want.
61rcpilot - 16/01/2019
Um, yes indeed. Jolly good. But it saves time for everybody if the plans we are hosting here are scaled to full size. That's a useful starting point (the most useful) for everyone.
SteveWMD - 17/01/2019
Add a comment