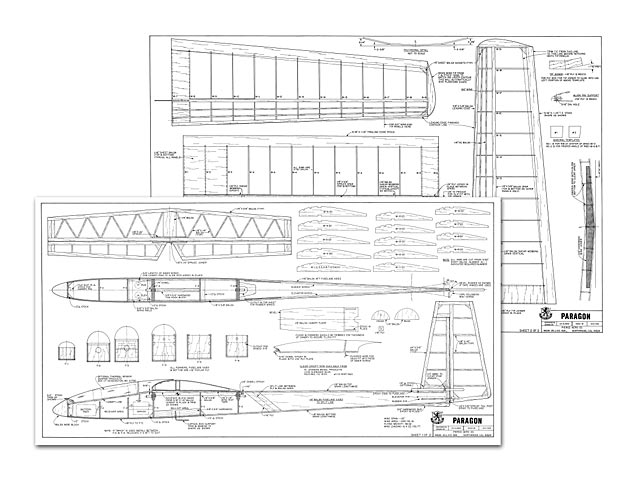 Quote: "A 118 inch span sailplane that is easy enough to fly for the pure novice, yet highly competitive for the veteran flyer. With 6.4 ounce wing loading, the Paragon is one of the lightest Open Class machines around, but penetrates like a much heavier ship. If that isn't enough, it's ideal for night flying with chemical lights...

As a manufacturer of several sailplane kits, I had more than a casual interest in what the contest and sport flyer wanted in the way of a sailplane kit. I had concluded that from a performance standpoint, the majority wanted high launch capability, light wing loading for minimum sink, the ability to climb in light lift, good handling, small circle capability, slow flight for more precise spot landings, and provision for easy ballast addition for penetration and speed runs when needed. In anticipation of future wider use of Thermal Sensors, a place for the sensor should also be provided.

The prototype model designed to the above requirements was completed, by coincidence, the day of a scheduled night flying session and while I did not intend to put it up in the dark, I thought some testing could be done at twilight. One hand glide verified CG position and the next flight was on the Hi-Start. Several more flights followed with the model averaging about 5 minutes per flight. As darkness fell, I would have been content to stop flying right there, but was persuaded by my flying buddies to put two chemical lights on and give it a try. A number of flights followed with different pilots, the best of which was for 7 minutes 45 seconds by Jerry Krainock. Since that time a number of night sessions have been held and the Paragon has yet to be out-performed.

For those of you who prefer to fly during the daylight hours, you might be interested to know that the same model was hand-launched by Bill Nibley at Pierce College on September 7 1975, for a thermal flight of 73 minutes 13 seconds, and was brought down because of concern about the condition of the internal batteries.

Construction. Clean off your workbench and put fresh sandpaper on those sanding blocks. Regardless of which component you choose to assemble first, I would advise cutting out all the parts for the entire model before beginning assembly. You can trace the parts on tracing paper to make patterns which are then cut out and rubber cemented to the parts to be cut out or you can get two sets of plans and use one set for the patterns which are cut directly from the plans. Parts that are similar, such as main panel ribs, can be cut in stacks using one template..." 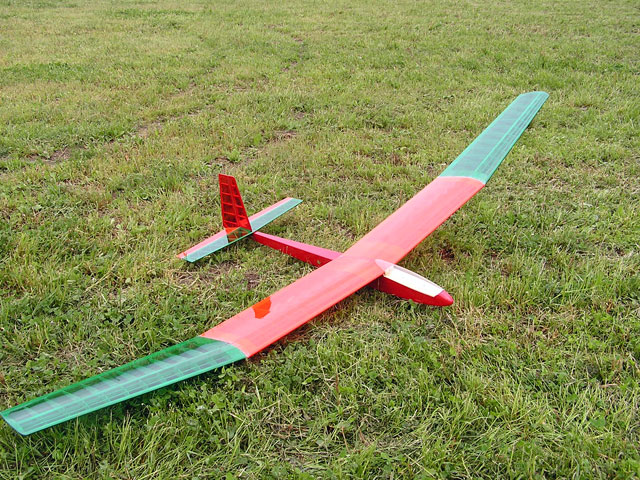 Hi, these are my Paragon pics [model photo & more pics 005, 006].
Shigeru_Ichikawa_Japan - 01/10/2018
Hi Again. Here is my newly completed 3m span 'Paragon' oz5849 [pics 007,008]. I have electrified it and fitted spoilers. I am very happy with the result, although the spoilers really are not necessary. Regards from South Africa,
Torsten - 03/11/2020
Hello, I am sending you some photos [pics 009-013] of this wonderful glider that I built recently. It has some aesthetic modifications to the fuselage according to my taste personal. You can see some videos on you tube. Greetings from Argentina,
Fabian Sabatini - 30/11/2021
Add a comment