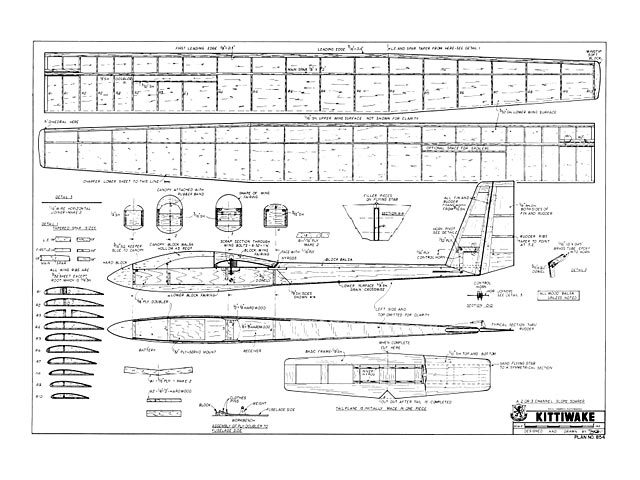 Quote: "The author, in searching for a sailplane design that was just a little more elegant and scale-ish, derived the unique Kittiwake. By Jack Headley

I am always designing the ultimate glider, which is just as an elusive task as doing the ultimate anything. Previous ultimate gliders have taken a variety of forms; sometimes they are stick soarers, sometimes scale, then there's always the MonoKote Overcast, which crops up quite regularly. (One of the pleasures of aeromodeling is that you can make your daydreams come true, at least sometimes.)

My current version of the ultimate glider came about after the recent purchase of a new book, this was 'Janes World Sailplanes and Motor Gliders' which I can heartily recommend to any glider fan. After a few days of thumbing through this volume, the old urge to do a little glider designing appeared and, borrowing bits from this page and that, I concocted the Kittiwake.

One of the requirements for this design was that it. should look a little 'scale-ish' and another was to have something a little more elegant. for my local slope. All I seem to find there these days are ugly models. I know that beauty is in the eye of the beholder, etc, but really, what's happened to all the Cirrus (oz8532) models? I haven't seen a model around that was designed with french curves for many moons. Most of the current crop of sailplanes seem to have been designed with a meat axe, then scattered with red, white, and blue stripes to disguise their outlines. Let's face it, they're not much better shapes than the box the kit came in.

The recent World Championships showed that tremendous performance can be obtained with elegantly shaped models, so there's really no reason for continually building square soarers. That's about all the preaching I intend to do on this subject, so I'll step off the soap box and leave you with this final plea: Why not improve things at your local flying site by taking along something shapely - and bring along a nice looking glider as well.

Construction notes. Fuselage: Cut out the basic 1/8 fuselage sides first; which are shown on the plans with small triangles on the outline. The 1/16 plywood doublers are next, and these can be glued to the fuselage sides now. This gluing operation is done with the fuselage sides curved to approximately their final shape, and this needs a few weights and blocks, and is best shown by the sketch on the plans. Don't forget to make a left and a right hand fuselage side.

After this operation, the sides can be joined with Frames 1-4 and the bottom block and sheeting. The fin, which is discussed in a later paragraph, together with its control rod attached for the flying stab), can be installed now, and the NyRod or equivalent can be put in place for the rudder control.

Note that Frame 4 seals up the rear fuselage; this is to prevent small items collecting in the aft end, and possibly jamming the elevator horn. Close up the rear fuselage by adding the top block, then sand away for a while until a pleasing shape appears.

The plans show some typical fuselage cross sections and these can be used as guidelines for the final fuselage shape..."

Article pages, text and pics, thanks to BernardMcGahee. 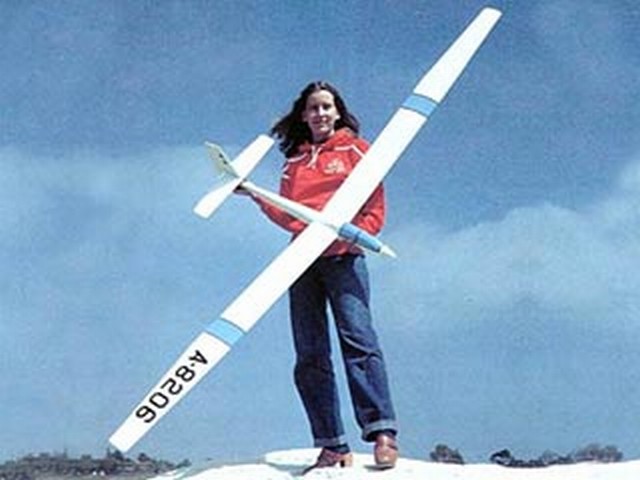