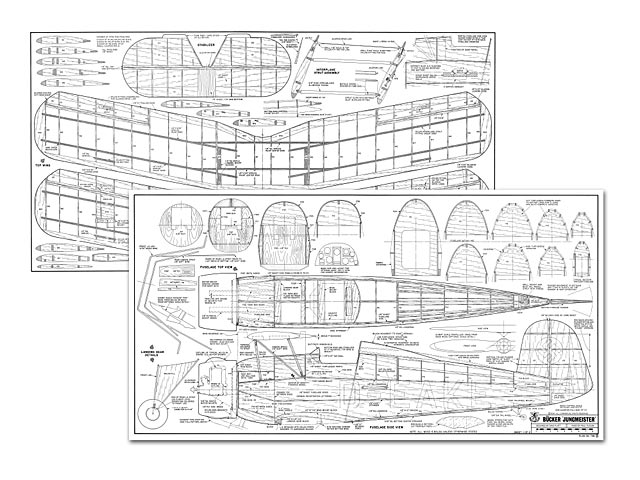 Rights to this design are now with http://www.belairkits.com/ who sell a laser cut parts set complete with plan and cowl, and have agreed to leave this pdf plan on Outerzone as a free download.

Quote: "One of the difficulties with small biplanes, as R/C subjects, is that they often have to have such big bodies, giving us a power problem. Then, too, sometimes they have such short moments that flying one is kind of like trying to balance one ball-bearing on top of another.

For such a small airplane, only 21 ft wingspan, thie Jungmeister is unusually well proportioned; a deep, yet narrow, body, long nose and tail moments, gracefully swept wings. For a model, it would be difficult to fault. Even the radial cowl lends itself to totally enclosing any engine, along with a muffler.

I decided to jump right on the topical trend and make my Jungmeister as a 1/4 scale model. Saying 'Quarter-scale' normally brings visions of some great monster. Not so here. With a wingspan of 65 in, the Bucker fits into a car handily - a Kenilworth isn't needed. Then too, it will fly nicely with a Schneurle .60 engine (regular direct drive) turning a 13 x 5 prop, although I have a Webra .91 in mine. The Webra, running on a 16 x 4-1/2 Rev-Up, flies the model through a beautifully slow and realistic acrobatic routine, at no time needing more than 1/2 throttle. Forget speed! You won't need it; indeed, at half throttle on the 16 inch prop, the Jungrneister will not stop in a vertical climb. It just hangs on that big fan and keeps going up, just as slow and pretty as can be, After his usual WW II fighters, your author found this a whole new way to fly!

As built, my prototype (shown in the pictures) weighed about 10 lb, With almost 1200 square inches of wings, this seemed about right until I flew the model. An unexpected problem arose in that, rolling at even a very low speed (such as in a landing roll-out), the model has so much lift that it wanted to keep floating into the air again. After adding some more detail, and a little tail weight, I figured the extra 1 pound added would help it to 'sit down' on the runway, and it did help somewhat. Even then, the ship must be landed carefully and I now believe that 13 or 14 lbs. all-up might even be better. Now I know what Ron (I forget his last name) meant, when he told me at Toledo, of adding six pounds of lead to a 1/4 scale Champion to get it to fly right!

Although I term the model Stand-Off Scale the outlines are in fact scale, and anyone who cared to go the whole nine yards with detailed engine, full cockpit, etc, would have an AMA Precision Scale entry. The only deliberate change involved the wing airfoil. For some unaccountable reason, the full size Jungmeister has a flail bottomed airfoil - odd, considering its fame as the king of the low, tow inverted pass. Playing a hunch, I went to a semi-symmetrical airfoil, but stayed with the equally weird force arrangement used on the plane..."

Update 6/10/15: Added Sheet 3, thanks to StefanF. Not the plan as such, but contains very useful additional 3D sketches that illustrate how the model goes together. 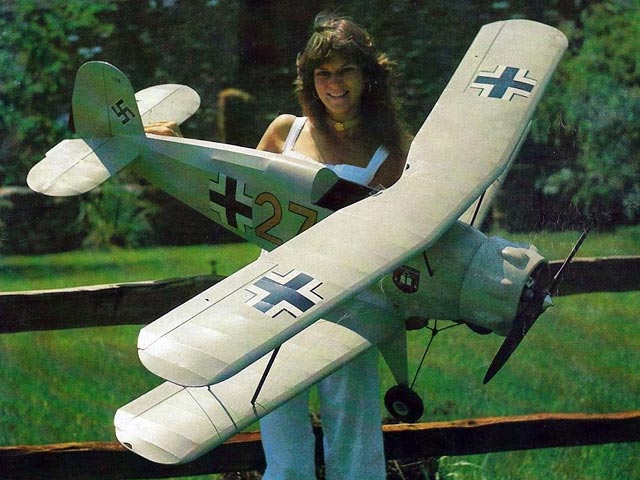