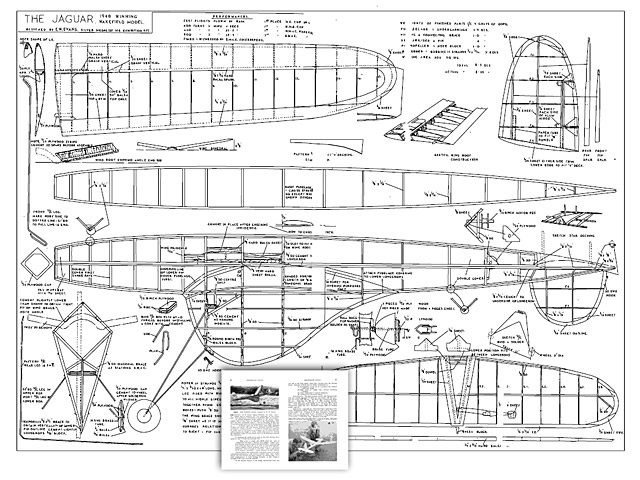 Quote: "1948 Wakefield Winner. EW Evans' Jaguar Wakefield has been 'news' almost since its inception and first appearance on the contest field. First mention in Aeromodeller in September 1947, was guarded: 'an unusual Wakefield model designed by Mr Evans. Many replicas such as this, flown by members of the Northampton Club, have met with considerable success.' But by November of that year it was well enough known to have jokes passed on its bellied under fin, as: '...particular merit was EW Evans three flight aggregate of 483.2 secs. gained with that familiar Wakefield described by many as being in a certain condition'. In 1948 its successes have continued to mount, both in the hands of the designer, and his fellow-clubmen, until it reached the height of rubber model achievement by winning the Wakefield Trophy for this country, flown by Northampton clubman Roy Chesterton.

In designing the model Evans kept no less than thirteen main points in view, of which the principal were:

High power to weight ratio (50/50 aimed at).
Ease of construction and repair.
Freedom from gadgets.
Largest practical diameter airscrew without detriment to glide.
Undercarriage to be positioned nearer the CG to allow for more rapid take-off.
Largest wingspan without increasing aspect ratio to a ridiculous proportion.
Drag to be kept to a minimum.
Positive adjustment of all surfaces.
Portability.
Normal duration of 4 to 4-1/2 minutes.

Unusual feature that undoubtedly contributes much to its really outstanding performance is the forward underfin belly, that locates lateral area well forward and partly encloses the undercarriage. It is built supplementary to main fuselage structure, so that weight or strength of this is not adversely affected.

Of the thirteen features in the design specification every one was met in the final Jaguar, which flew virtualy from the drawing board..."

Note this plan does not show all formers and ribs. See the Air Trails 1949 Jaguar (oz5743) listing for a more complete plan. 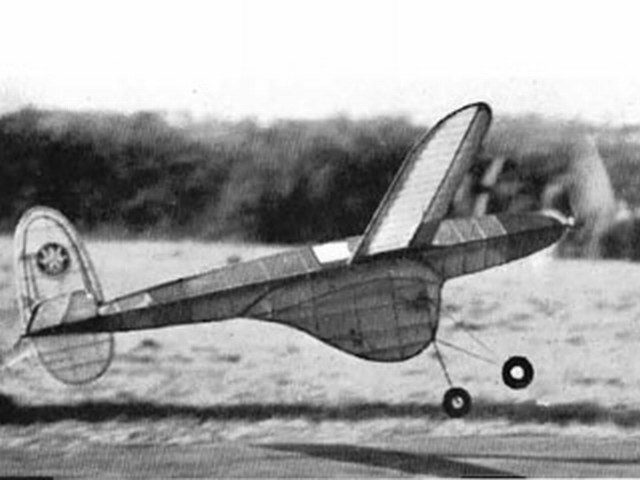