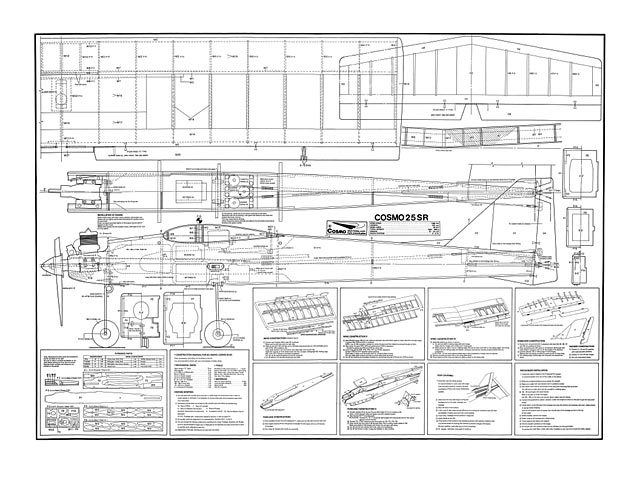 COSMO IS THE RATHER UNUSUAL brand name given to a new range of kits (made in Korea), being introduced into Britain by DPR models of Shoeburyness, Essex. Subject of this review is the Cosmo 25 SR, a 50-in span high wing trainer and general sports model, which requires 3-4 ch R/C and, as its name suggests, motors between 19-25 cu in capacity. I was somewhat pleased to see this model features traditional, all built-up, construction due to the fact that, for the past three years or so, glass-fibre and foam materials have formed the mainstay of my modelling diet!

The Kit: This arrives in a surprisingly small box (must be all those large ARTF model 'coffins' I've dealt with which gives me this impression!), a single colour photo of the completed aircraft on the lid being the only real decoration afforded. Presentation while good, does lack the more glossy 'eye appeal' found nowadays on a large proportion of its European counterparts, but I understand that later kits have the full treatment.

First impressions, upon removing the lid, are of a lot of Balsa and ply parts all neatly packed. Some items such as die-cut wing rib sheets and balsa tail components being sealed inside separate polythene bags, a nice touch. Closer inspection reveals all materials to be of good quality, with one exception - the wing spars. These, in my opinion, are far too soft for their intended purpose. Fuselage sides and formers, ribs, ply doublers, etc. are all cleanly pre-cut, most components needing only slight assistance from the knife to break free.

Quite a comprehensive selection of hardware is also provided including hinges, control horns, engine mount, a nicely moulded white plastic spinner and a set of kwik-link rods. I mention the latter items in particular because they are listed as extras, according to the plan! Fuel tank, wheels, collets, wing seating tape and 1/4 in square pushrod material does need to be furnished by the builder, however.

There is no instruction manual as such, instead all relevant information is carried on the full-size plan, which is well drawn if a little cluttered. On the bottom right-hand section appears a series of step-by-step assembly drawings, showing clearly each building stage. My best advice here is follow this constructional sequence and you can't go far wrong!

Also provided is a parts check-list plus an adhesive guide. My only real criticism of the plan concerns the very poor 'translated' English used, there being quite a few misspelt words and some very weird terminology indeed! Such errors are obvious, and should provide little difficulty for the more experienced modeller but are bad news for any first time, novice builder who is unfamiliar with 'R/C speak'. Improved wording and, possibly, a separate instruction book (to tie in with the plan) would greatly improve this situation. Oh yes! Almost forgot, also lurking in the box are a set of self-adhesive transfers. Right, that's the kit, let's build it.

Before doing so, it is essential to rub all relevant areas of the plan with candle wax or, as I did, cover the whole thing with polythene sheet (film backing). Doing this, of course, prevents the structure adhering to the plan once the glue is dry.

Wings: I commenced construction with the wing. This is a conventional, all built-up structure of semi-symmetrical section. First job is fit the spar doublers (part Nos W2). A very simple procedure but remember, when doing this, the wing rib slots should be located on the bottom of the top spar and vice versa. Also don't forget to make up both a left and right hand pair, a seemingly obvious point, but one easily forgotten. (Ahem!).

To aid accurate assembly, prenotched L/E's, T/E's and mainspars are employed, thus ensuring the wing ribs fit snugly in place. I found the slots in the balsa stock were roughly 1/16 in out of line relative to the plan, not a major problem really, but one I would like to see improved nevertheless! Due to its section the wing cannot be built flat on the board, jigging tabs on the ribs are therefore utilised. A point to watch here is every second rib does not have a tab - a dry run helps overcome potential problems. Same applies to the inter-rib webbing (supplied pre-cut, handy!), only every second bay is shown sheeted (excluding the centre-section, that is). Here I introduced my only mod, by webbing every single bay, due to heartfelt anxiety over those flimsy mainspars. Better safe than sorry, what? Remainder of the building is straightforward but at this stage, off the board, the basic framework is quite weak and flexible. Before work can start on the left wing, a reverse image must be obtained by greasing the plan and rendering it trans-parent. Once this task is complete, simply build as usual but on the back of the paper.

No less than five dihedral braces (4 ply, one balsa) are used to join the wing panels so, hopefully, there is little cause for concern regarding lack of strength in this area..." 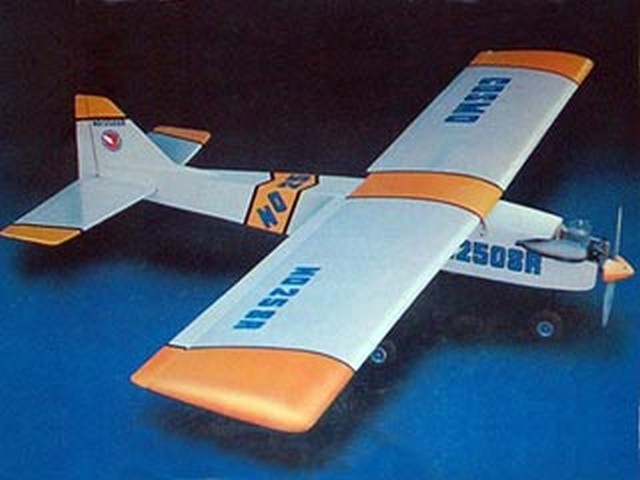