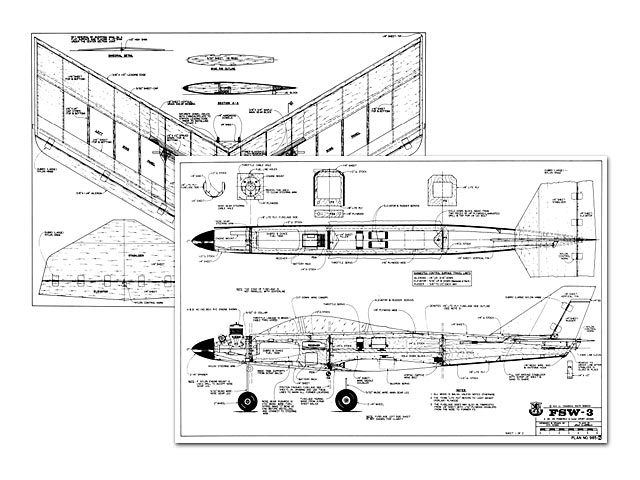 Quote: "We can an leave it up to designer Don Sobbe to give us something different. This forward swept wing model will get you all the attention you want and also some great flying. By Don Sobbe.

While writing 'The Shape Of Models To Come' (see Feb '86 RCM) I started thinking about building another forward swept wing model in order to learn more about their performance. At the same time, I realized that there were probably a few curious souls who might he interested in flying one of these creatures. Taking my usual scientific and completely analytical approach to this idea, I said to myself - hmmm, there's nothing on the workbench. It's too cold out to fly and the shop needs another coat of sawdust anyway, why not?

The FSW-3 (forward swept wing, third in a series) was designed as an easily built, 40 powered research platform to study constant chord forward swept wings. I also wanted it to be an acceptable sport model. After building the wings, I made a discovery. In the above mentioned article I had made the statement that these wings needed to be fully sheeted to make them absolutely resistent to torsion. At the time, I was referring to much larger wings that carried greater loads than this wing. But in this case, when the ribs are mounted at an angle, the wing turns out stiffer than a dead carp. And that's pretty stiff... "

Hello, Here is a set of plans from Radio Control Modeler or RCM for a .40 size: Forward swept wing RC Model. 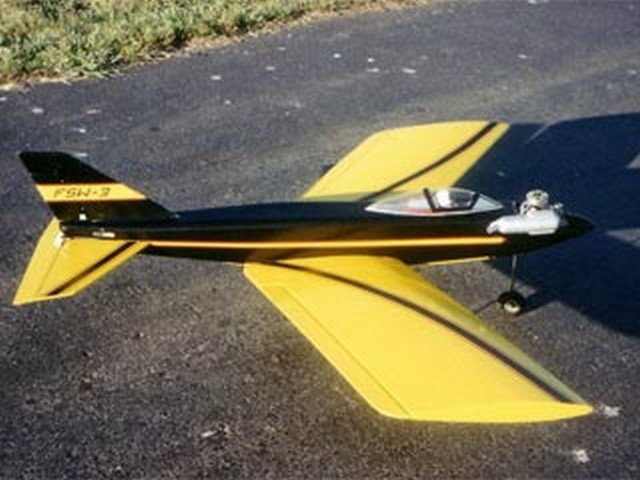 I built this plane when the plans came out in 1987. It came out pretty heavy and flew OK but nothing spectacular for a 40 size airplane. The slow speed capabilities were excellent though and it would hardly stall. The best thing was the looks I’d get from other modelers. I think they thought I’d totally lost it.
sam - 26/10/2015
Add a comment