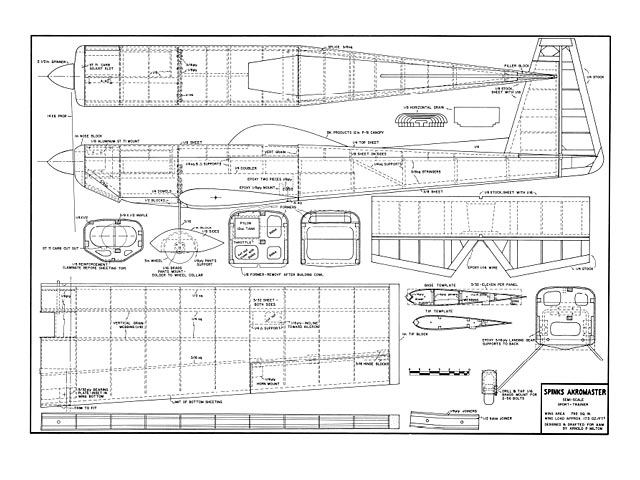 Quote: "We all have an idea of what a perfect model airplane should be. In most cases it is probably based upon the modeler's flying, building, and financiai abilities; and perhaps, geographical location. This is the story of my perfect airplane.

Three years ago, l found myself beyond the initial training stage in flying ability, after crashing Jim Kirkland's Beachcomber (oz7780), Nick Ziroll's Pitts Special (oz6003), and a self-designed 1000 sq in glider-type 'thing' that was never meant to do aerobatics with a ST 71. Thus, after learning the rudiments of flying the way a rot of us unfortunately seem to do, I was ready for an airplane that could train me through the intermediate stage and into expert flying. I decided that a large plane with precise, but not critical, flying characteristics was required. It should be capable of all aerobatics and, therefore be high powered with light weight.

About this time AAM (February 1970) carried a story on the Spinks Akromaster with an accompanying article about computer and wind tunnel designed airfoils by Dr Walter Good. Portions of both articles were incorporated into this design.

The model utilizes the symmetrical E-747 airfoil, which gives excellent inverted and slow speed performance. The model differs from true scale, in that the fuselage is narrower to expose the top cooling fins on the side-mounted ST 71. Big engines can develop heat problems if improperly cooled. I also thought it improved the model's appearance. The nose is altered slightly to facilitate cooling and building. The wing and tail have straight leading edges - also for easier building.

Although the plane is not designed for the novice buirder, the lines of the Akromaster adapt readily to simplified model design and rapid construction, Building speed might be shortened by using Profoam, in place of the formers and sleeting, on the top of the fuselage. The wing can also be easily made from foam, by using the base and tip templates shown on the plans.

The basic structure of the nose, the motor mount beams and three plywood formers including firewaH). should be epoxied together first. Cut out the 1/8 in alurminum mounting plate to fit your engine, drill the mounting holes for the plate in the maple beams, and mount the plate to the beams..." 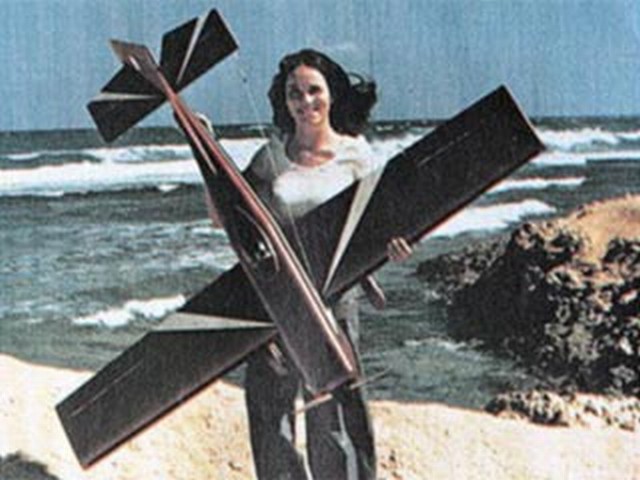