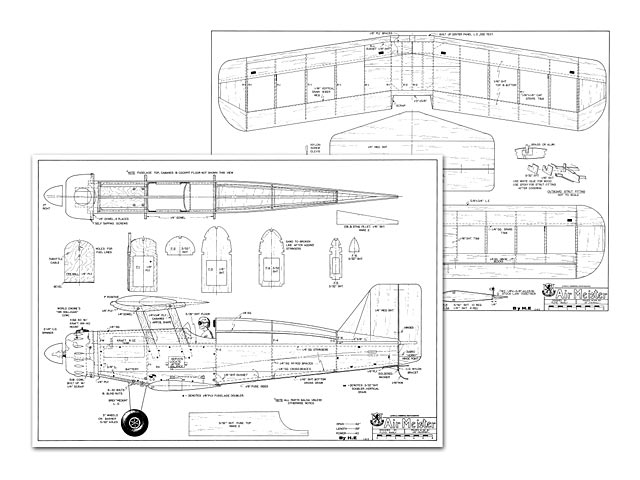 If you can handle a fast trainer or any low wing job - you're ready for a bipe! The Airmeister was designed as a 'first' bipe. The fuselage is a basic box, with plywood for strength and a few stringers for shape. The wings and ailerons are simple construction. Everything is held together with tried and trusty rubber bands. The landing gear and engine cowl are right off your dealer's shelf. The wooden cabanes are strong, and save you the hassle of bending and attaching wire ones.

The Airmeister looks like, and is, an evolution of the Aeromaster (oz1971). I'm surprised that Lou Andrews hasn't come out with a .40 size version of his fantastic plane. Everybody has a .40 motor, or should, so I've designed the Airmeister as a scale model of his non-scale model. It looks and flies like the Aeromaster, but I've cut every corner, and simplified every bit of structure, to make it as easy as possible to get you in the air with a bipe. Still, it retains the basic flying ease and handsome looks of its adopted big brother.

Construction. The following directions were written step by step as I put together the last prototype. Following them will give you a logical sequence of assembly, and eliminate many little traps and pitfalls. If you should get hung up on something, the plans, pictures, or directions should explain what I may have forgotten to explain clearly. Common sense directions like - sand all the ribs to the size - or - butt glue two sheets of balsa to get the size needed - were left out. I've assumed that you've built at least one kit already.

Details on covering the plane arc left up to you. I've used Silkspan and dope. Coverite and paint. and MonoKote - take your pick.

Follow the directions and you'll be pleased with the speed and ease that the Airmeister takes shape. Do it your own way, start taking shortcuts, or making modifications, and it doesn't fly right don't blame me.

Even though I love bipes, like most modelers, I hate building wings. A finished wing is just a wing. but a finished fuselage is a thing of beauty. So we'll start with the fuselage which, when it's done and sitting there on the landing gear, will inspire you to complete the wings so you can fly..." 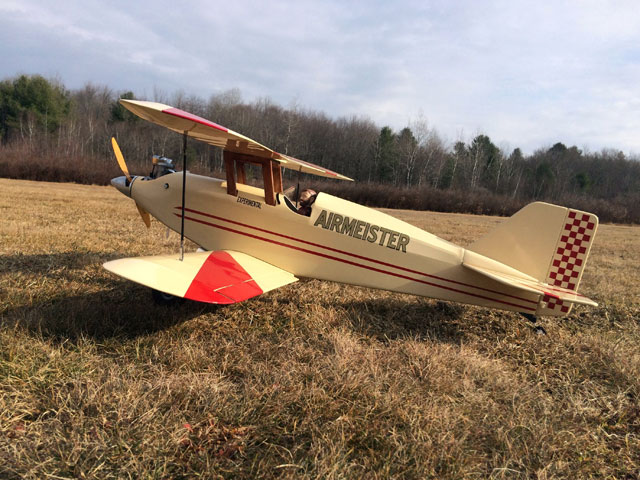 I built this plane 20 years ago, and I'm in the process of building another from drawings I traced from the pdf for the laser cutter. My laser cut parts reminded me that the wing ribs on the original plan do not match the wing saddle, as was my experience when cutting parts by hand the first time. Builders should either redraw the wing saddle, or alter the ribs to match it. Once you get that straightened out, this plane is very good in all regards. It is lightweight, it flies very well, it lands easily, and it can survive a tumble in a plowed field.
Rob - 01/02/2015
It's Larry again, thank you for all that you do! This air build is a brushless motor set up [more pics 003-008], but could not get the rite C.G. need 15 ounces of dead weight. So I stretched her 3 1/2 inch.
LarryW - 14/06/2016
Here ares a few pictures of my RCM Airmeister I built a few years ago [model photo & more pics 009, 010]. Please feel free to add to the Airmeister pictures. Thank you!
DustinD - 08/07/2019
Add a comment