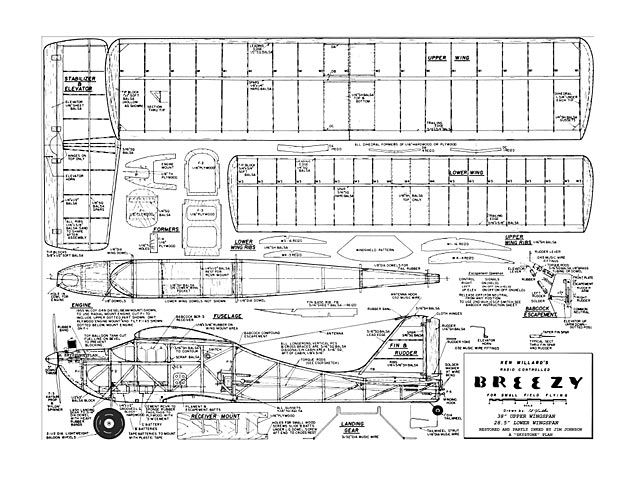 Quoye: "For flying in small areas, this .049 powered bipe will do figure eights within a 15-foot circle. Development of unique ship well worth reading. Breezy, by Ken Willard.

Radio controlled models, for the most part, require pretty large open areas in order to be flown and maneuvered with any degree of safety. This is no particular drawback for those fellows who live in the smaller communities where a short drive puts them out in the country, but for the enthusiasts living in large cities, finding suitable flying areas gets to be quite a job. One notable exception to this is the City of Los Angeles, where the Department of Recreation and Parks is working closely with an Association of Hobbyists to provide not only an adequate area for radio jobs, but also for free flight and controlline flying as well.

However, everybody can't move to Los Angeles to fly radio controlled models, so another solution is required. This solution, naturally, is to design a radio job that can maneuver inside an area like a football field. And this is no small problem of design. Many things besides the airplane itself must be considered, such as noise tolerability, minimum danger to surrounding buildings in the event of malfunction, ability to get out of tight spots, etc. Its really a challenge to try and come up with the answer.

Certain decisions were obvious. The model should be Half-A powered to keep the noise level down. It should be light and small, so the danger of damage, both to the airplane and to whatever it might hit, would be minimized. it should be able to turn very sharply to stay out of trouble when close to the ground. It should have reliable radio.

The first design I tried was a functional monoplane with a slab sided fuselage, just barely large enough to accommodate the Babcock BCR-3 receiver. It was, and still is, an amazing little machine, quite capable of holding its own in any competition flying - but it turned out to be too hot to qualify for the small field requirement. It is very easy to fly, but it takes up a lot of space as it maneuvers. Although it weighs 2 lb, the McCoy .049 Diesel or the new McCoy .049 glow engine gives it unbelievably good performance.

The performance of the first design was sufficiently encouraging, it appeared worthwhile to make another, only this time going all out for light weight and high lift in hopes of slowing the job down a little. So another monoplane was built, but the more complicated Warren truss type of built-up fuselage was used for lightness, and the NACA 6512 airfoil, which has undercamber, was used on the wing. By careful selection of wood the weight of the model was kept to 26 oz (12 of which comprised the radio and battery weight). Again the results were encouraging, but still not satisfactory. This job could turn sharper and glide slower, but with the lighter weight it would really dig out under power. It seems incredible, but I actually had to plug the McCoy Diesel down in order to reduce the performance!

There were two possible avenues still open; I could make the model just a little bigger, without increasing the wood sizes in cross-section, and thus come up with a lighter wing loading and heavier power loading; or I could try a biplane design, which I knew would be capable of sharp turns.

As luck would have it, I had a couple of spare panels in my scrap box, left over from an earlier biplane free flight design, the old Duranita (oz4898). They weren't really designed to fit the job I was flying, but I rigged up a temporary mounting arrangement, covered the panels with silk, stuck the panels in place, and went out to try the idea.

The model hadn't been in the air half a minute before I knew that I was on the right track. For the first couple of flights I took it easy on the button until I got some altitude, but from then on I threw caution to the winds and just had fun. We have a 150 ft circle which has been leveled off for ROG flights (and landings for those that can hit it), and with a little practice I have been able to do figure eights inside that circle. It is also possible to circle the model up to altitude, wring her out, and then, when the engine quits, circle down almost inside the 150 ft circle except for straightening out the last turn in order to make a final straight-in glide for the landing.

The addition of the lower wing increased the weight by a couple of ounces, and also necessitated a little more fin area. There seemed to be plenty of excess power, so it now looked as if one more model, designed as a biplane to begin with, would prove to be the final answer. However, by this time, I was just a little tired of building new jobs, so I did the designing and turned the building job over to my good friend Bill Glick. He came up with one of the slickest models you ever saw, except that it was just large and heavy enough to be marginal as a Half-A job, and we finally had to go to a larger engine. Also, when we did that, the model was no longer a truly small field job. It did serve two purposes, though: Bill has a real nice biplane for sport and contest flying, and I found out that the practical weight limit for Half-A biplane jobs is about 28 oz, even though the monoplane performs well at 2 lb.

And thus I arrived at the final design for Breezy, the small field specialist, which permits, as added attraction, that you remove the lower wing, slip a light balsa fairing in the wing cradle, and fly the job as a monoplane.

The name Breezy came naturally: the model is not intended to penetrate a strong wind, but it flies well in a breeze. It uses a Babcock Radio Engineering receiver (BRE) and is easy to build and fly (EZY) , which all adds up to BREEZY.

For those of you who are pretty hep to the radio side, and feel that you can set up a really reliable lightweight receiver of the modified Lorenz type, you can lighten the model by about 4 oz and get it to fly in an even smaller area, but you'd better be sure of that radio. A friend of mine, Brett Page, who works in the laboratories at Hughes Aircraft Co, makes up a sweet little two-tuber that weighs only 1 oz and with a Babcock 1.0-2.0 relay, a couple of 22-1/2 volt hearing aid cells, two pencells for the A supply and onepencell for the Babcock escapement, we were able to cut down the radio weight by 6 oz. With this equipment installed, Breezy flies around like a control-line job. The BCR-3 receiver, using the lightweight battery complement shown in the plans, incorporates a slight modification in the circuit by connecting the C-plus to the A-plus. Otherwise, it is standard. A word of caution - check your A batteries often, and don't let them get below 1.25 volts if you go in for long flights.

So much for the background story on the development of this model. Let's get on with the construction. In this regard, one thing is very important to remember; weight can be controlled by careful wood selection, and the lighter you make your model, the smaller the area you will be able to maneuver in.

I have mentioned that Breezy is easy to build. That is, of course, a relative statement, because no radio job is 'easy' to build, but some are easier than others, and Breezy falls into this class. It follows the simple, classic, Warren truss pattern in the fuselage, and conventional wing and tail construction. Only a moderate amount of detail construction is shown, because most of you will probably make modifications anyWay to suit your own taste. Just don't modify the layout! That is, unless you want to change the flight characteristics to suit your own purpose. If you do, be careful of one thing, particularly if you decrease the angular difference between the main wing and stab settings: watch out for right turns under power if you have your right thrust setting arranged for straight flight cruising, because as the speed picks up in the right turn, the right thrust pulls the nose down, and it can be dangerous. It isn't bad if you're flying Breezy as a biplane, but if you have removed the lower wing, it can be disastrous if the speed builds up too far..." 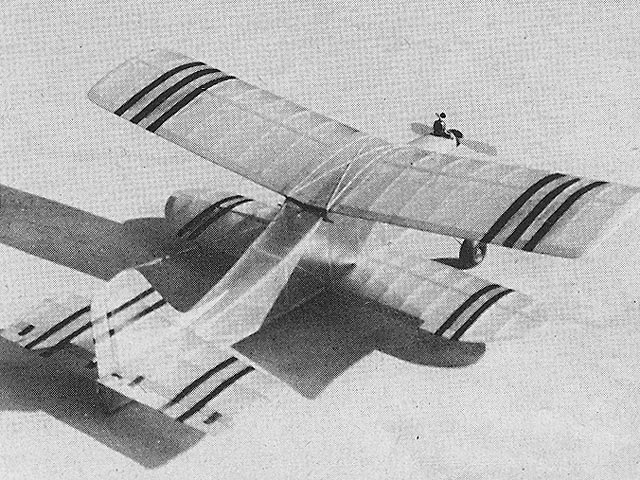 While looking for another Mode Zero project I noticed that your plan of Ken Willard's Breezy oz582 did not have a build article. I scanned the attached in from my very yellowed copy of Model Airplane News August 1955. The printers probably did not consider that someone would want to read the 35 cent magazine some 65 years later when selecting paper quality!
The most interesting part of the article is the flying technique used on these multi function single channel RC models back in the day. Hope they are usable. Regards,
MikeFoster - 28/10/2020
Add a comment