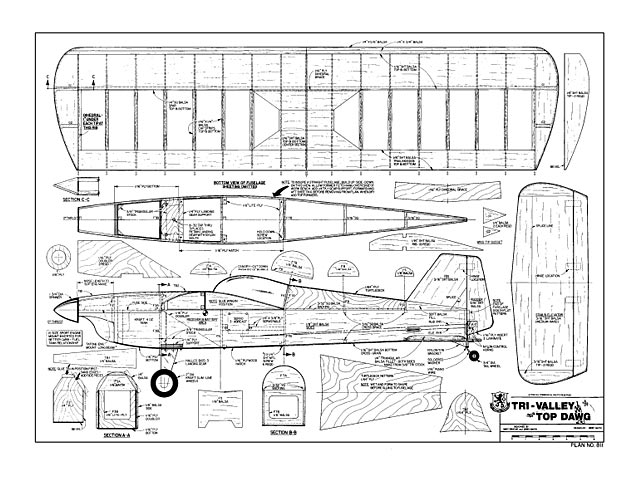 Quote: "We of the Tri-Valley R/C Club in South Bend, Indiana, have been having a great time sport racing. You haven't tried it yet? This is certainly not new, nor is it a rank beginner's sport. However, if you are able to get it up and down in one piece, you qualify.

Several years back our club kicked around the idea of sport racing. And, of course, the main idea was to promote the spirit of competition within the club as well as provide some club visibility in the way of entertainment for our local area. Several clubs from the surrounding area were invited to participate in those races. A racing committee, made up of several members from each club, was soon formed and a set of rules were agreed on. It takes some organization to keep the majority happy, as many of you know.

We chose two aircraft for racing - the Top Flite Top Dawg (oz8897) designed by Ken Willard, and the Fred Reese Quickie (oz5856) kitted by Michigan Hobby Hangar. It soon became apparent that building the Top Dawg, especially the fuselage, was really a dog, After all, it was designed some years back, in the days of escapements, and needed some building simplification. But, it did have good flying characteristics and proved quite groovy around the pylons. The Quickie, on the other hand, although easier and faster to build, didn't have the same agile ability to negotiate the course. Although, with a good pilot, it was certainly in competition with the Dawg.

Walt Senour, Tri-Valley Club president and one of those super competitive guys seemed to be cleaning up at every race. A closer examination of Walt's Dawg revealed some very subtle appearance and structural changes, though the basic form of the Top Flite Top Dawg was still eminent.

I became interested in Walt's version and built a prototype to fly. Feeling that this particular Dawg had good potential for racing and that our club would certainly adopt it as their basic racer, I drew up the plans. I must give Walt Senour credit for the original design, because without it there might not have been a 'Tri-Valley Top Dawg.'

The first consideration, as I said before, was a complete moderization of building technique which mainly involved the fuselage. Increased room in the forward section allows a 4 oz Kraft fuel tank better placement with regard to the engine carb. The airborne radio equipment is installed through a hatch in the bottom while the wing is permanently fixed. The stab and vertical fin are made from 3/16 sheet balsa, and are more rigid giving better control response.

The nose moment was slightly increased. Some dihedral was removed from the wing while the stab area was somewhat decreased. Rudder area was increased. Wing tip design was changed in favor of the polyhedral tip which helps considerably in the turns.

And, lastly, we changed the overall appearance by giving the Dawg a sleek and racy look.

This is not a beginner's airplane and, assuming those interested in building it have some experience, I won't bore you with a piece by piece assembly commentary. But, rather, cover the places where some additional explanation is required to ease your building problems. The plans are very straightforward and will give you no trouble.

Fuselage. After cutting out all the parts necessary to construct the fuselage, begin by bonding the 1/16 ply doublers to the sides. Make sure of a left hand and a right hand. These doublers may be bonded in place with contact cement, Hobbypoxy II or Crazy Tape.

Next, and this is very important, build the fuselage upside down over the top view on the plans. Arrange the plans on your building board so that former F2 has clearance to hang over the edge. Pin down the 3/16 square cross braces and formers F3B, F5, and F7B. Next join the sides making sure the tail post falls on the fuselage centerline..." 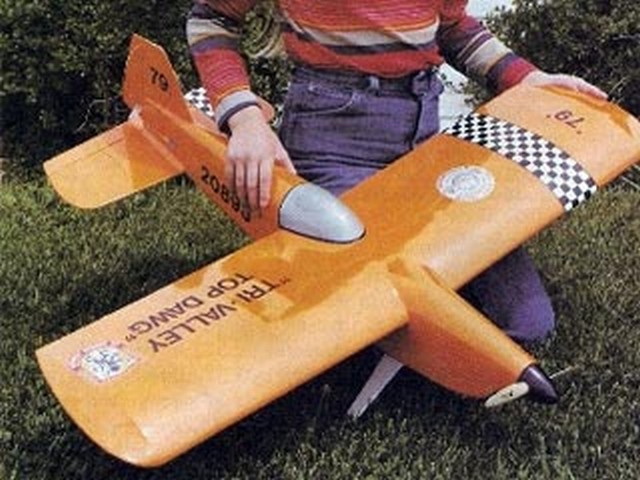