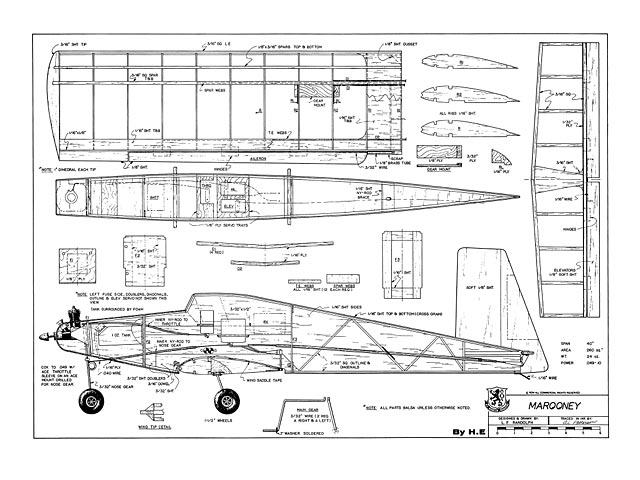 Quote: "My first experience with a throttled .049 was with a Ken Willard Showmaster (oz6222) - great airplane - but the throttle was more or less a 'slower-downer' rather than a throttle. Better yet it acted as an exhaust port cover in case of a nose down landing in the dirt. Since then I have had a lot of throttled 1/2As, all of which had to be flown-on and run into the tall grass to stop. The Ace throttle sleeve is different. With it, touch-and-gos are rnot only practical but easy and, for the first time a 1/2A that will taxi. The mid-range on this throttle is almost nonexistent but it is enough to make slow and easy cruising fun.

Marooney was built to take advantage of the Ace throttle. It is an easy to fly airplane, smooth and groovy stable. It is not a bomb but it will perform loops, Cuban eights, rolls, etc - and do them outside as well as inside. Snaps and spins are possible if the fourth channel for rudder is added, and that can be done with very little trouble. A 1 oz tank will fly Marooney for nearly 10 minutes (the original had a snuff can tank of nearly 2 oz.) so there is plenty of time for T & G's.

The tail skid is necessary to keep from grinding the tail down, since landings are made at rather high angles of attack. Incidentally, I fly a rather low nitro fuel and, although performance is not as good as with hotter juice, the climb angle is still 25-30 degrees and I have flown in 18-20 mph wind with little difficulty. The. airplane is strong enough fora .10 without modifications or, if you prefer more pep, one of the new .061's with full house might be fun.

Construction. First this is an airplane not a bridge - build it like an airplane. Although this design is not an ultra-light one it must be kept within reason as far as weight is concerned. Any additional weight manifests itself as higher flying speeds and results in much more damage to the ground in hard landings.

Wing: The wing is a good place to start: this one is a tried and true design that is quite strong for the weight. Make a template of the rib from thin, hard paper such as a file folder or notebook cover and trace around it on to a piece of 1/16 medium soft balsa. With care, all 22 ribs can he cut from the single sheer with some left over..." 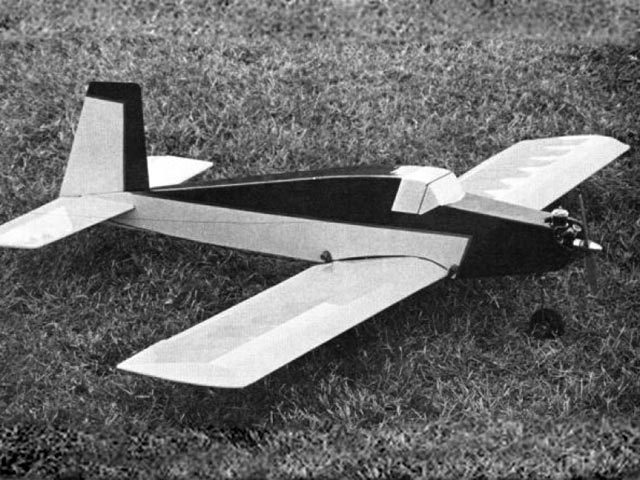