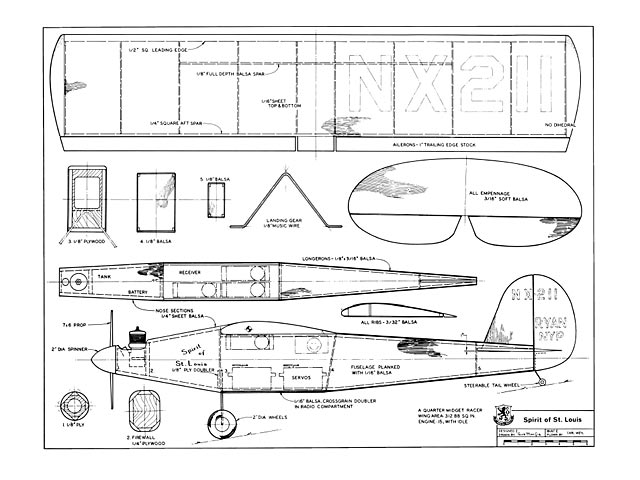 Quote: "An unlikely looking candidate, next to all those sleek, streamlined quarter midgets, the Spirit of St Louis just keeps on winning races.

The Quarter-Midgets have really taken over in the Northrop MAC. Most have been built with sport-flying in mind, but with a number of similar class models in the air each weekend, impromptu races are very common. Some of the fellows worked up a match between our club and the Orange Coast R/C Club to be held at Mile Square Field, and then the interest really began to pick up.

Carl Weyl wanted to enter, but it was tough to find something that would carry his older, bulky radio gear. We did a Lot of wild sketching but nothing was working out right.

Eventually, we came to the conclusion that we had to go back to basics, and we took to the 'aerospace systems analysis' approach. We drew in the servos as tightly as we could, tucked in the receiver and then spotted in the minimum cross-section called for in the rules. Right away we could see that we had to find something with a big square fuselage, preferably with the cockpit faired in. The best location for the wing seemed to be on top of the fuselage where it would be out of the way of the goodies tucked inside, The first sketches indicated that a Mr Mulligan might do the job, however, it wasn't too long before it became apparent that the big flat cowling up front was going to cost too much drag. What was needed was something with a pointy nose and a boxy fuselage.

Well, it wasnt long before the sketches looked more and more like the Spirit of St Louis. Actually the 'Spirit' idea started as a gag, but the more we sketched, the better it looked. When you stop to study it, the Spirit makes an excellent prototype..." 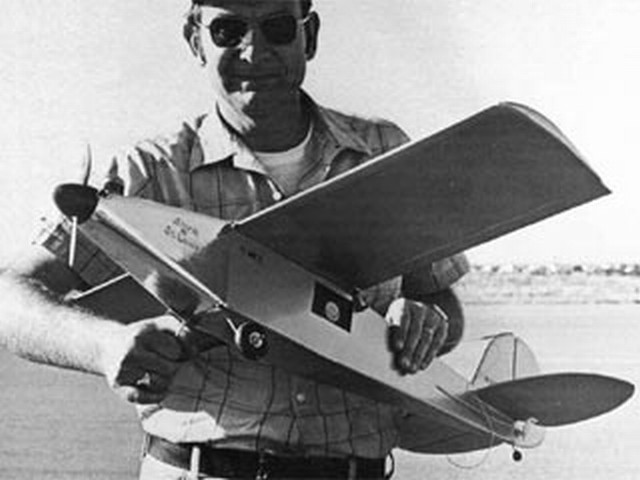