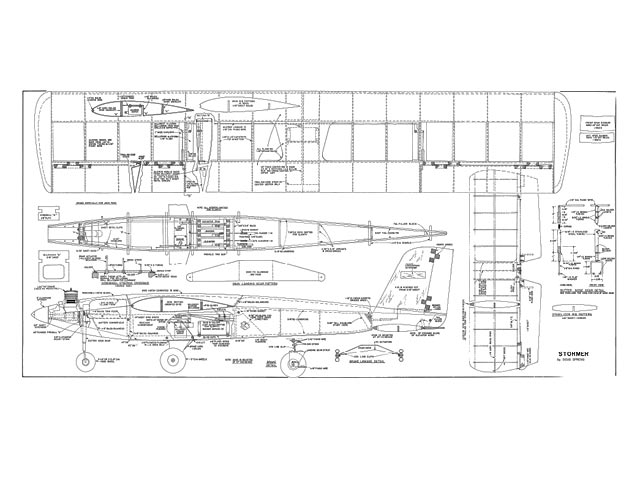 Stormer is a return to the older style R/C jobs that ruled the roost before the present day plethora of low-wingers took over Multi completely. But Stormer is a bit different - lookit the zero-zero incidence set-up of the wing and stabilizer. And no down-thrust or right-thrust at all. Last, but not least, note that ye wing rests comfortably on ye fuselage. Old hat? Mebbe. But let us, literally, take Stormer apart and see what makes her tick the way she does.

HIGH versus LOW. Come on, fellers, let's face it! It is just plain easier to build, fly end maintain a shoulder wing model. We must also face the fact that a shoulder-wing configuration is inherently more stable in the roll axis, Indubitably! The more stable a model is, the fewer correction commands need be sent; therefore the resulting flight is that much smoother. Now we are all familiar with the glaring need to keep correcting that ole dropping-wing tendency so characteristic of low-wingers. Somewhat akin to having to keep it balanced on the tip of the transmitter antenna. Nuf sed!

We have have a question from the balcony, Professor. No down or right thrust? Right! None needed. The esteemed Charles Grant (and I) contend that an offset engine is a gross waste of power. A properly distributed lateral area is self-compensating to torque; hence no right thrust. The thrust line coincides with the center of drag, ergo no down thrust. It's that simple!

This is no fluke peculiar to one model only. Storrner's design antecedent and four of Don Mathes' Gamblers have been built along this line of thought. And it works every time.

As a bonus, frontal area has been kept to a minimum via the spinner and semi-cowled engine. No built-in headwind in this job! The stab is mounted to the bottom of the fuselage with rubber bands. This makes the model easier to build and less prone to damage if it should cartwheel.

And now some yakking about the tail group. You all know that Dr Walt Good leaves the thickness of the elevators constant chordwise in his Multi-Bug (oz1274) design. The reason for this is so the elevators will be effective at very small angles of attack. Now Walt flies TTPW and I fly reeds. Therefore I taper the elevators to a fairly sharp trailing edge. You say it doesn't make sense? Okay, I'll put it another way.

In order to make a reed ship look smooth in the pitch axis during a maneouver, one must blip the elevator - that is pulse 'up' for a large loop, etc. This means that if the elevators were sensitive near neutral, the slightest blip for up would make the model act like a kangaroo. But, fellow confused modelers, if the elevators were relatively insensitive around neutral, it would take more blips for a given looping radius. Therefore, the model would act smoother - the incremental changes in pitch attitude would be less noticeable..."

Quote: "Steve, I see you have the Flattop Stormer by Doug Spreng. Here's the earlier version, simply called the Stormer from American Modeler, April 1961." 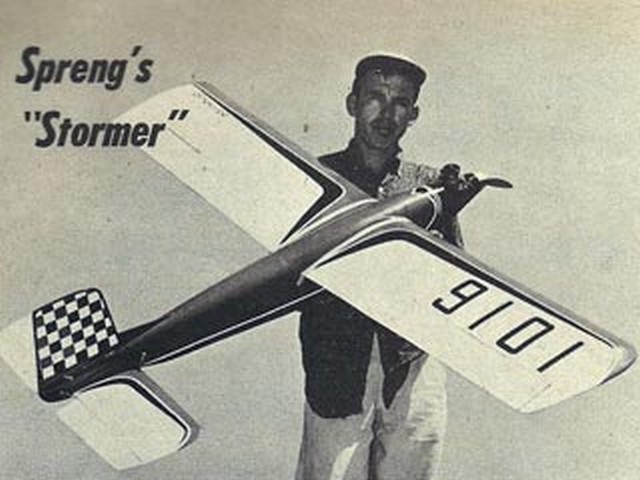