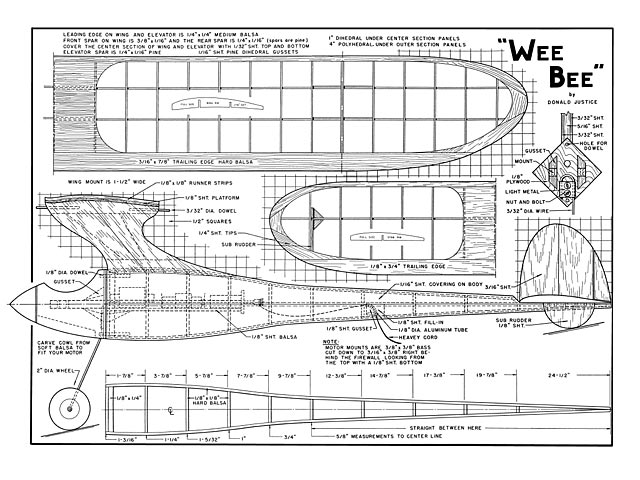 Quote: "IN DESIGNING the Wee Bee, we wanted a model that a beginner could build but which would have good enough performance to win contests with. Therefore, we were highly elated when we heard that Val Sherrard, of Topeka, who never built a free-flight gas model until his Wee Bee, had taken first place in Class A, and won the Effinger trophy for the longest flight of the dap at the 1946 Talleorn Meet at Marshalltown, Iowa. Several other Wee Bees have been built and all of them have been good performers.

Simplicity in construction was attained by using conventional construction but eliminating all unnecessary pieces and making each part do as many jobs as possible. Maximum climb was obtained by cutting weight and reducing drag as much as possible.

First, sketch up full size plan of the fuselage, the wing, pylon, and elevator. The rest of the pieces can be built using only their dimensions as given.

Fuselage is built to a square cross section in the usual manner and then turned on one edge to give it its diamond-shaped cross section. Select four longerons of hard balsa of as nearly equal strength as possible to aid in getting true alignment. Two sides are built, one over the other on the full size sketch of the fuselage side. Since all four sides are alike, you should cut out all the crosspieces it once to save time and gain accuracy.

While the two sides are drying on the plans, build up the three laminations for the pylon, 3/4 in soft sheet core and 1/8 in outside laminations, and allow to dry under weight for at least 24 hours.

When the fuselage side frames have dried thoroughly, take them rom the board, cut apart carefully and build the fuselage up into a square, starting at the widest point and working forward and back from there. Next, fill in sections 1, 2, and 3, and around the tail sections with 1/16 in sheet for extra strength, as shown on the plans.

When you are sure that the pylon is dry, take off the weights and carve and sand to a streamline cross section. Cut a V-shaped groove along the bottom where it joins the fuselage and cement it in place, using lots of cement..." 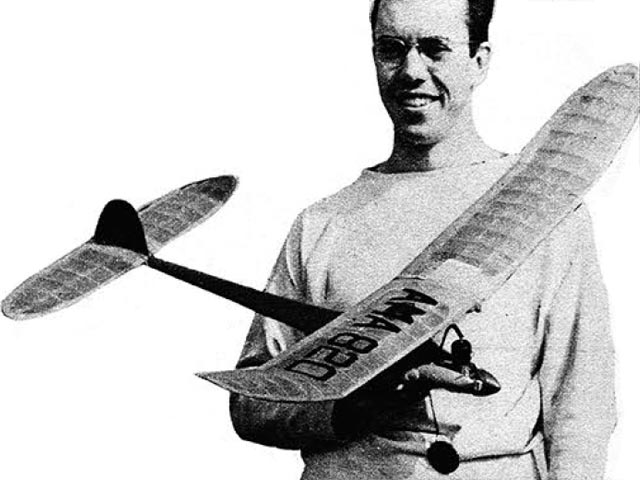