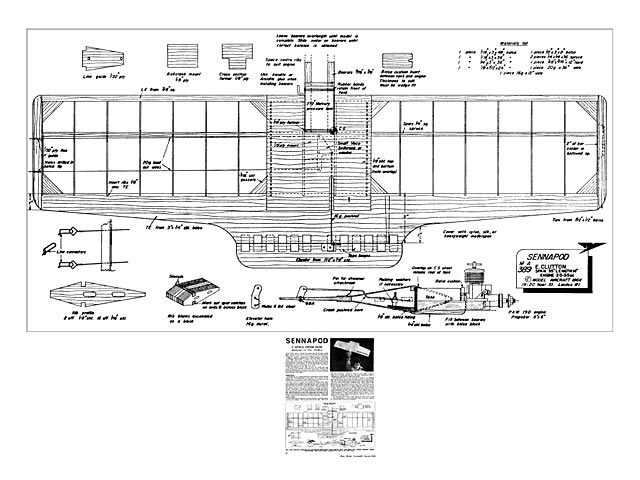 HAVING made a number of combat jobs, all of which proved tacking in some way or other, I wrote down the tot list desirable 'combat' features and designed a model around them.

The model which was built to meet these specifications is presented here. For instance, besides being very quickly built the model has several other useful features. If the tank should spring a leak it is replaceable in a few seconds, there are no tubes in the wings tips to jam the lines, and my elevators neverr come adrift!

With my favourite PAW 19D up front, the model fairly zips round all the usual aerobatics and some not so usual. Owing to the rearward bellcrank pivot, the lines are so tight that it is possible to tell where the model is even when it is behind you - a highly desirable feature during a line tangle!

Construction: Mainspars are cut to length from 1/4 in square spruce and rib stations marked off. The leading edge is left square and overlength and the trailing edge is cut from 1/4 in sheet balsa and the notches cut for the ribs before it is planed down to 1 in thick at the rear.

A master rib is at (without spar notches) from hard 1/16 in balsa or ply and used as a template to cut all the ribs, which are then lined up in the form of a solid block and held together with a few pins from each side, with the two 1/8 in ribs in the centre. The spar notches are now marked and cut with a junior hacksaw or similar, and finished off with a small file. The 1/4 in sq spar should fit snugly and flush in each recess in the 'block.' Smooth off all faces of this block of ribs, with particular attention to the ends, which must be square with the ribs. Before removing the pins and dismantling the completed ribs, make two guide lines on the block as shown on tbe plan. These make it easy to keep the ribs in their correct relative position - a good way to avoid warps!

Place bottom spar on building board and glue ribs in position making sure they are upright. Add top spar and trailing edge. When dry, add LE and gussets. Reinforce all joints with a fillet of cement. Carve LE to section and add 1/2 in tips (after embedding weight in outboard tip) sand these to shape after fitting.

The bellcrank mount can now be glued in position and bellcrank and leadouts fitted. The elevator pushrod is cranked to dear the TE. The 1/32 ply line guide is glued to the inside of the inboard end rib. The 1/16 in sheet centre section planking is now added, being simply glued over the top of the ribs and LE & TE - note overlap on ribs. Fit elevator and cut pushrod to correct length to fit. The centre section former and bearers can now be fined, using an epoxy glue such as Araldite. Fill in between bearers with balsa block and complete details.

Cover and dope complete model. place tank in position, and slide motor with prop back and forth on bearers until correct balance is achieved - this is important! Now drill bearers and bolt engine in position - note sidethrust. Fit balsa cushion between tank and motor. This is partly to hold tank in position and partly to preserve the tank in the (unlikely!) event of a crash.

The diamond section wing on this model has amply proved itself in local competitions - to such good of that it has been adopted as our club (Five Towns MAC) model." 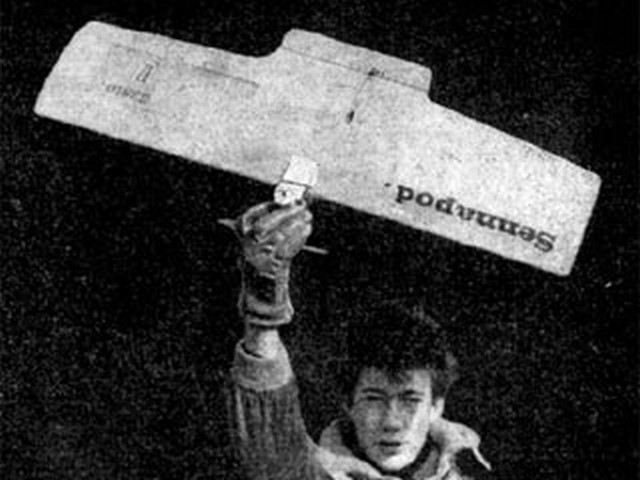 I built a Sennapod in 1964. I was amazed at how well such an apparently crude aerodynamic aerofoil performed and want to build another one. I built a second one with a smoother, more conventional curved aerofoil and 1/16 sheeted wings fore of the mainspar – and it didn’t perform as well...
HughAllen - 22/11/2014
Add a comment