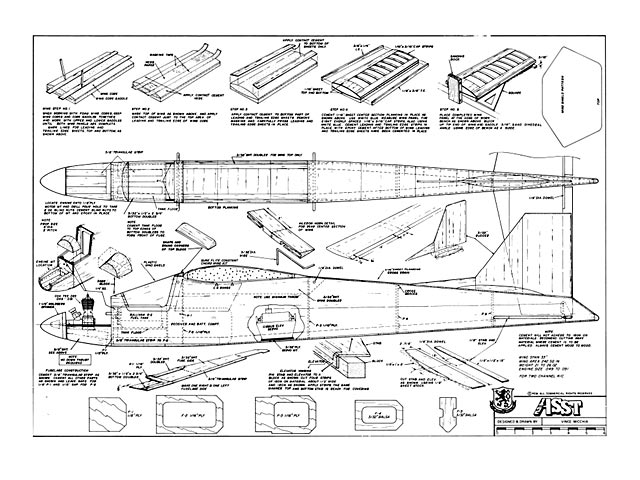 Quote: "The design goal for the 1/2A SST was to obtain the flight performance in a small, economical aircraft that is usually found only in the larger, more powerful RC ships. Dozens of flights have proven that this little bird does just that.

There is an impressive speed differential between powered flight and glide. Several design factors contribute to this. These are the clean lines, an efficient wing with ample area, overall light flying weight. Notably absent is the drag producing landing gear

Another feature is the use of ailerons rather than rudder in a two channel ship. Besides smoother turns, ailerons allow a greater variety of maneouvers. Whether you want an aileron trainer or a super sport fun ship, you should give the SST a try!

Now for building this bird, we have placed the instructions, supplemented with illuistrations, on the plans so there is no need to duplicate them in the text. The only thing we should mention concerns the wing. You can make templates for the airfoil and cut your own foam cores or you can buy a Sure Flite #2016 constant chord wing kit for $7.95.

Quote: "The 1/2A SST was published two months before the Hornet (oz5419) - it had a thicker foam wing that was partially sheeted and also used capstrips. This allowed the foam core to be covered with the plastic films without the pebble effect. The Hornet's smaller fuselage cross section and thinner wing gave it a speed advantage."

Note first published in RCM, as shown here, the 1/2A SST design was also later kitted by Hobby Shack see 1/2A SST (oz10442) for more details, and a slightly clearer plan to read. 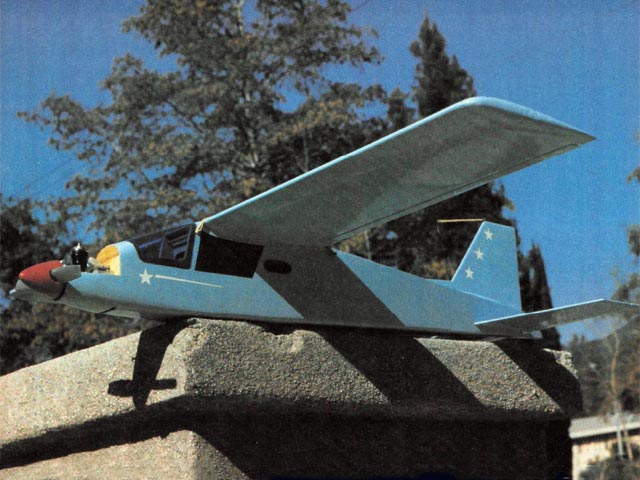 Hello! I would like to submit some photosof my finished 1/2A SST, oz5780 [more pics 004-011]. I fly it with a Cox .49 Black Widow at 15% nitro and a 5.5x3 prop. It's a blast! Really funny to fly it. When the engine quits, it shows a really safe gliding performance. If the construction is on the stockier side as mine came out, you will have a nearly indestructible plane that also flies very well. Greetings from Benavidez, Argentina!
LucianoBilota_Argentina - 20/11/2019
Add a comment