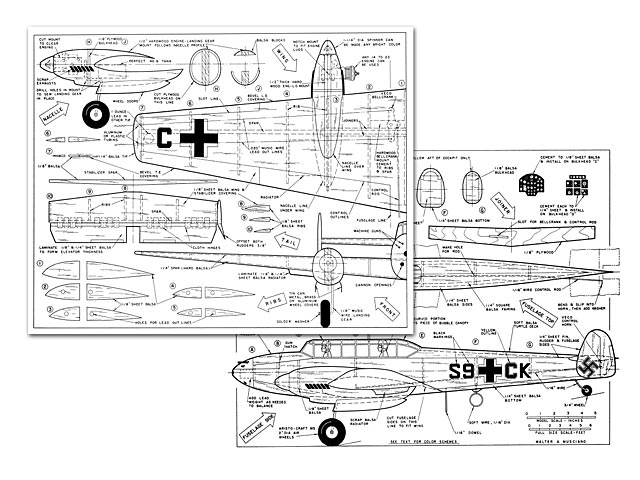 Messerschmitt's little publicized Me.110 played an important part in the Striking power of the Luftwaffe throughout World War Two. This multi-purpose fighter, used on every front from Africa to Russia, proved its versatility as an escort fighter, penetration fighter, night fighter, reconnaisance fighter, were as an interceptor. Contrary to popular opinion the Me.110 was not designed as a fighter-bomber although detachable bomb racks could be fitted to the under-side of the wing outboard of the radiators if necessary.

Designed prior to 1940, the craft was able to attain 363 mph powered by two Daimler-Benz DB-601 1,150 horsepower engines. Range was 4400 miles. Although the plane was fitted with accommodations for a pilot, radio operator and rear gunner the normal complement omitted the rear gunner with the radio operator serving as gunner when neccessary. Loaded weight of the Me.110 was 14,800 lbs, considerable when we realize that the normal weight for a large fighter in 1940 wan about 7,000 lb.

Offensive armament consisted of four 7.6 mm machine guns and two 20 mm cannon clustered in the nose. Defensive fire power was a lone moveable machine gun at the rear of the cockpit. This indicated that the plane was designed primarily for offensive duty. Although the engines were built to accommodate a cannon firing through the propeller shaft, there are no records to indicate that this feature was ever used. Many variations of the Me.110 were in use from 1940 to 1945.

The aircraft is known to many as the Bf-110 since its design studies started in lqate 1934 at the Bayerische Flugzeugwerke at Augsburg.

The details and markings on the plans are based on a full size Me-110 that crash landed early in World War II and was then sent to the United States for design study by aeronautical engirnners.

Any two glow plug or diesel engines from .14 to .29 cubic inch displacement can be installed in this model which is built to a scale of 1/4 in equals 1 foot. Ample wing area with the fairly thick airfoil section generates plenty of lift enabling the model to take a superior finish without fear of ruining the performance because of excessive weight.

Construction begins with the wing. Taper main spar as front view shows; saw plywood joiners to shape. Firmly cement a joiner to each side of spar applying plenty of cement, using clamps to hold units together. Joints automatically create proper amount of dihedral. Cut ribs, cement these to spar..."

Here is Walt Musciano's Me 110 from American Modeler magazine issue 04-58.

Update 25/01/2017: Added alternate scan from UncleWillie, thanks to Bernd57. This one shows full wing layout. 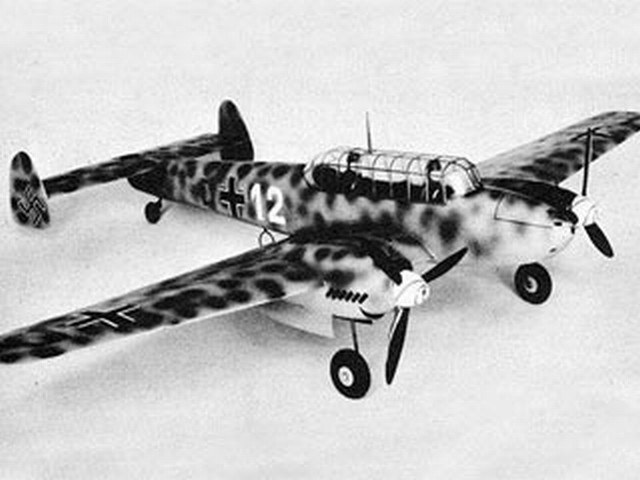