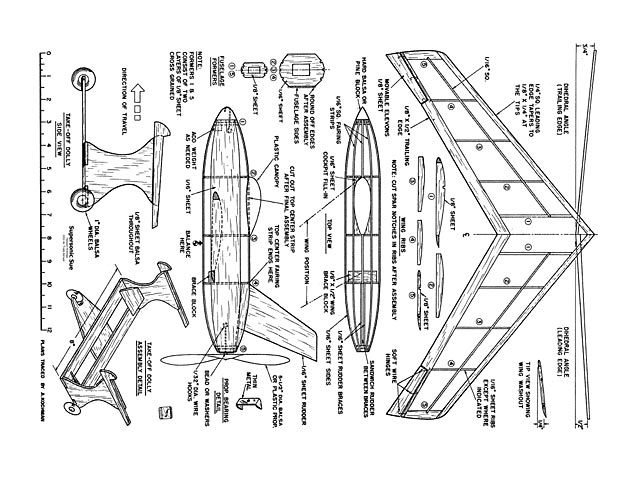 Quote: "Nowadays all the exciting new planes are supersonic, or at least jet-propelled, and in the single-seater category, flying wings are coming more and more into prominence. An effort to see what sort of a practical model 'wing' of really scale-like appearance we could make ended up as you see here. This little tailless ship was patterned closely after the Northrop X-4 job, with a few concessions to insure simple construction and reasonably good flying characteristics.

Of course, the X-4 has no propeller - this is our main concession. Otherwise Supersonic Sue is a true tailless speedster and a very nice flyer, too. The propeller can be either at nose or tail; we chose the latter position as the rear prop seems less conspicuous and the plane looks 'faster' when so equipped. Actually, the model balances better with the prop in front, and because no balancing lead is required, it is lighter and flies a little better. So take your choice. For our money the tail prop won out on looks alone.

The fuselage is built up on a basis of two balsa side sheets and three main formers. Cut these parts from soft 1/16 sheet. Before starting assembly, it is wise to pre-bend the side sheets at both ends, as this makes it lots easier to install the the end formers. Just dip your finger in water and rub it on both sides of the wood, then lay the two pieces on a flat surface with weights to hold down the portions that should remain flat (from former 2 to former 4), and blocks 1/2 in high to raise the ends. When dry, assembly can be started.

Pin one side piece to your assembly board, run a line of cement along both edges of formers 2 and 4, put them in place, then lay the other side on top. This assembly will not remain upright, of course; you will have to put dope bottless at each end to support it. Before the cement sets, align the four balsa pieces as accurately as you can, using a small triangle. Former 3 goes next, followed by 1 and 5. Note that the latter two should be beveled on the edges so that they will fit snugly against the pre-bent sides.

The rudder fits between the two brace strips; be sure the rear edge is no farther back than the plans show or it will be nicked by the prop.

Cut out the fuselage top for the cockpit opening. This cut-out isn't strictly necessary, but it allows you to watch the rubber as it is wound. The plastic canopy we used was from an inexpensive kit. If your hobby dealer hasn't one of the proper size, or a larger one you can cut down, carve a dummy canopy from soft balsa, and cement it over the fairing strips.

The wing is assembled on a board, then transferred to the fuselage. You will note that very little dihedral is used. This is practical because sweep-back has such a stabilizing effect that little or no dihedral is required. It is wise to cut both the wing main spars roughly to cross-sectional shape before starting assembly - they can be finished later. Note that the front spar tapers from center to tip, but the rear spar does not.

Lay out the spar and rib positions on your building board, lay a sheet of wax paper over it, then pin the two spars in place. The ribs are all different in size and shape. We suggest that you cut them roughly to shape, but leave them all a little oversize and about 1/8 longer than shown. Cut and trim each rib to fit as you cement it in..."

Quote: "Hi Steve, First time for me. Plans & one page of an article from the Air Trails Annual in 1953. Author & designer was Howard McEntee, a Hall of Famer at AMA. You guys have several of his up there but I didn't see this one. Plans are for 'Supersonic Sue'. Stand-off scale tailless free flight model of the USAF X-4 in the X-series of planes. Originally rubber powered. Makes a great foam wing .45 glow engine size plane of about about a 60" span, and can be powered by electric of course. Lots of options for a creative builder. I built two copies that were rubber powered as a kid in the early 1970's and a .40 glow powered version in 1999. Unfortunately no pix of my efforts survived but the one page of the article I have attached has the original publication photo." 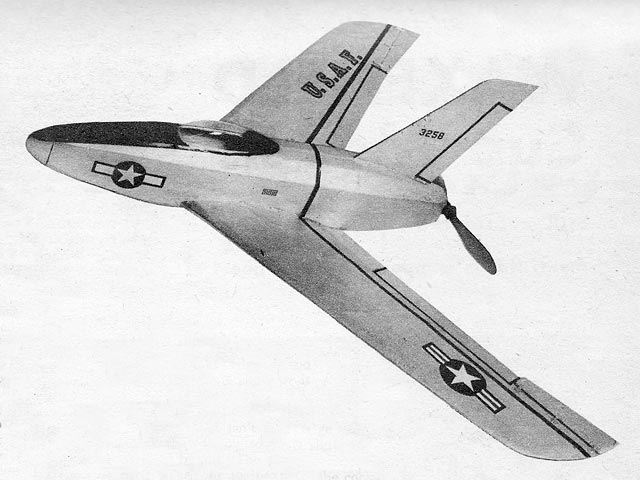